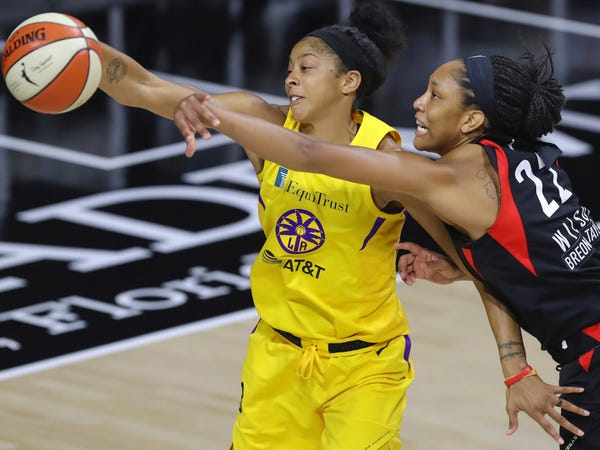 The 2020 WNBA playoffs are approaching in the "Wubble," and there's no excuse to miss some of the best basketball on the planet.

When the first games start on Tuesday at IMG Academy in Bradenton, Florida, a plethora of younger stars who've been dominating the league will be looking to carry their regular-season success into the playoffs. That includes MVP favorites A'ja Wilson and Breanna Stewart, as well as Rookie of the Year frontrunner Crystal Dangerfield.

But the All-Stars of old continue to confound father time. A 39-year-old Sue Bird, 38-year-old Diana Taurasi, and 34-year-old Candace Parker have all been instrumental in leading their teams into the postseason, with the latter two making compelling MVP cases for themselves along the way.

All of these stars will bring their A-games to the hardwood in pursuit of the most unique WNBA championship to date. Six of the eight teams in contention for the title will compete in single-elimination games to advance to a playoff series, setting the stage for bedlam in the bubble.

Meanwhile, the top-seeded Las Vegas Aces — who have never won a championship as a franchise — and the No. 2 Seattle Storm have both earned double-byes.

Here are the five most compelling reasons to tune in.

Young star power has fueled the league throughout the season and carried multiple teams into the playoffs. 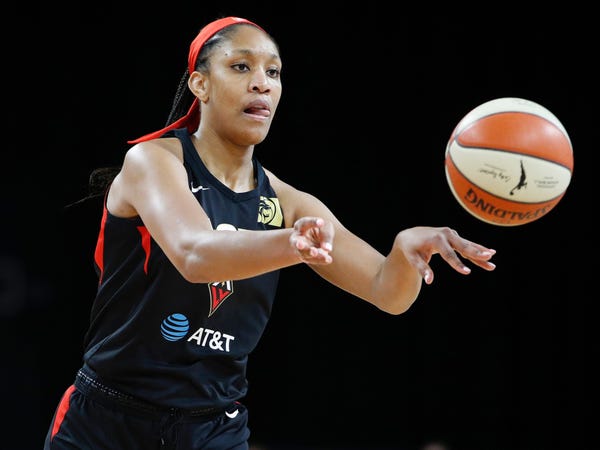 The tight race for 2020 MVP has come down to two of the WNBA's younger stars: the Las Vegas Aces' A'ja Wilson and the Seattle Storm's Breanna Stewart. Both 6-foot-4 superstars have been ranked top-five in scoring throughout the season and have helped their teams reach the top two seeds in the playoffs.

Now, Stewart will look to defend the Storm's 2018 title after missing last season rehabbing a ruptured Achilles tendon. Wilson, meanwhile, seeks to lead the Aces to their first-ever championship without two of the team's top contributors — Liz Cambage and Kelsey Plum — by her side in the bubble.

But the pool of young talent goes beyond those two. Minnesota Lynx guard Crystal Dangerfield has emerged as frontrunner for Rookie of the Year. She'll look to lead her team to its first finals appearance since 2017 alongside Napheesa Collier, the do-it-all forward who's had an All-WNBA-caliber sophomore season.

But many league legends continue to play at a high level into their mid- and late-30s. 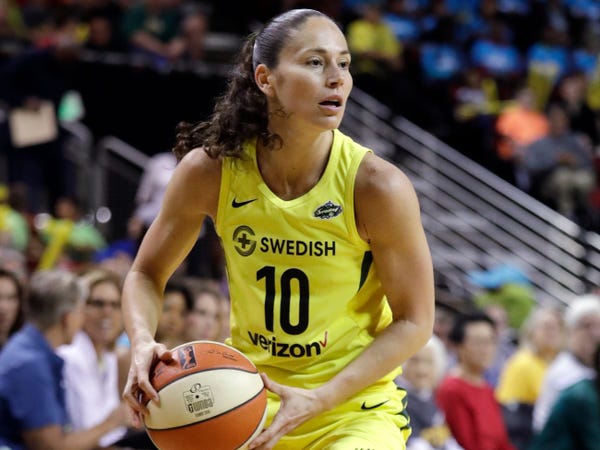 On the other end of the spectrum is the WNBA's old guard. League legends like 39-year-old Seattle Storm point guard Sue Bird and two-time WNBA MVP Candace Parker have seen their teams secure top-three seeds in this year's playoffs.

A handful of veterans have all played top-tier basketball in the bubble, more than a decade into their professional careers. The playoffs will give them a chance to add even more hardware to their crowded mantles.

And who could forget that the WNBA's greatest player of all time will be fighting for her fourth championship? At 38, Phoenix Mercury guard Diana Taurasi is playing some of the best basketball of a career that has already included five scoring titles, 10 All-WNBA first-team nods, and the most career points of any player in league history.

Single-elimination games have the potential to generate bedlam in the bubble. 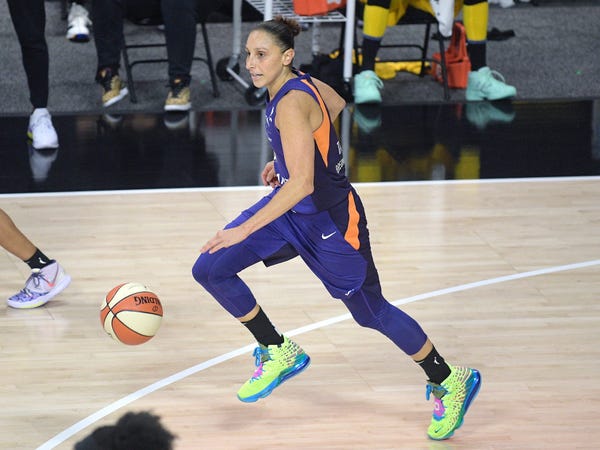 Taurasi will lead an undermanned, fifth-seeded Phoenix Mercury in the second of two single-elimination playoff games on Tuesday night to kick off the playoffs. She and fellow All-Star Skylar Diggins-Smith have been the most prolific backcourt duo in the league, averaging a combined 40 points per game over their past 10 contests.

They'll take on the reigning champion Washington Mystics, who clinched the final spot in the postseason despite playing the 2020 season without 2019 WNBA MVP Elena Delle Donne and three other starters from last year's squad.

The Connecticut Sun and Chicago Sky will face off in the first single-elimination game of the playoffs at 7 p.m. Tuesday. Courtney Vandersloot, the league's assist leader, and her wife, sharpshooter Allie Quigley, will lead the Sky. They'll be looking to knock off DeWanna Bonner, Alyssa Thomas, and company for a ticket to yet another do-or-die matchup.

Some teams will get a chance to redeem themselves after brutal losses in last season's playoffs. 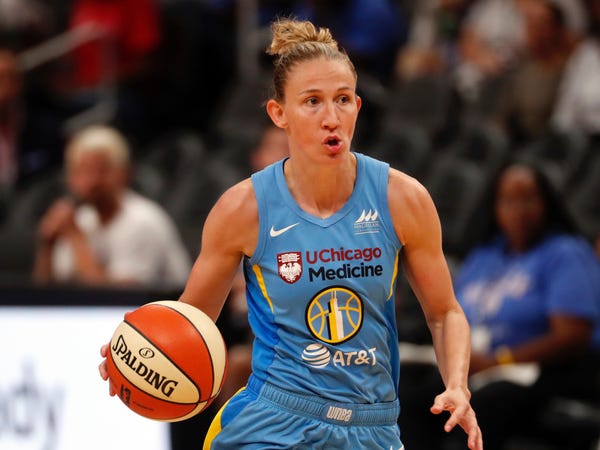 The Sky know a thing or two about the chaos and potential heartbreak of single-elimination playoff games. Last year, Chicago was eliminated from title contention thanks to this mind-boggling heave from the Aces' Dearica Hamby:

A number of teams will be seeking redemption and, in some cases, revenge. The Taurasi-less Mercury fell to Chicago in the opening round last year, and Las Vegas lost in the semis to the Mystics, the eventual champions. Last year's Storm squad knocked out the Lynx in the first wave of single-elimination before getting torched by the Sparks. All of those matchups could make reappearances in the bubble, giving last season's losers a shot at vengeance.

Three of the remaining teams are looking to win their franchise's first-ever championship. 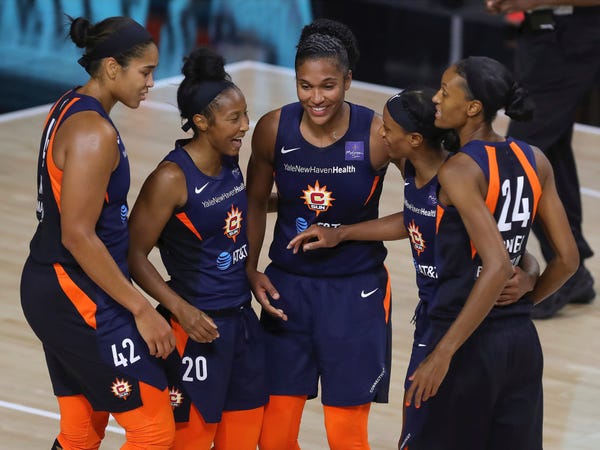 Three of the eight teams that qualified for the playoffs — the Sun, Sky, and Aces — have yet to win a championship as a franchise. Connecticut came close last season after making it to the finals, but Las Vegas — which locked in the No. 1 seed thanks to a close win over the Storm on Sunday — has the best shot to bring a title home. The Aces are neck-and-neck with Seattle as the favorites to win it all.

Here's the schedule for the first two rounds of the WNBA playoffs, which you can watch on ESPN 2: