A worker who killed two people and wounded two more at an Alabama fire hydrant plant early Tuesday has been found dead, apparently after killing himself in a car, a police chief said.

The gunfire — among the latest in a spate of shootings across the U.S. — broke out about 2:30 a.m. at a Mueller Co. plant in Albertville, Smith told reporters. The gunman then got in a vehicle and left the factory. His body was found hours later inside a car in Guntersville, about 15 miles away, Smith said. 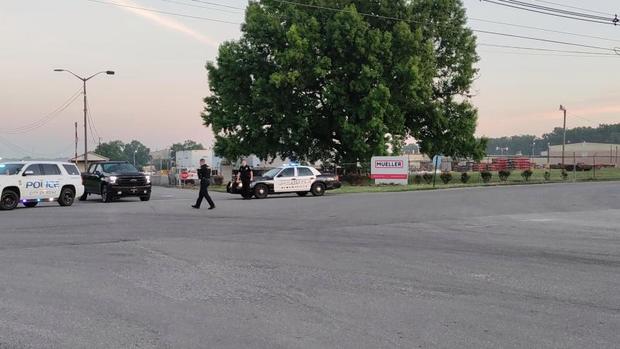 Smith says it wasn’t immediately clear what prompted the shooting.

A company representative did not immediately respond to an email seeking comment.

Mueller Co., based in Cleveland, Tennessee, is a subsidiary of Atlanta-based Mueller Water Products Inc., which calls itself a leading maker of water distribution and measurement products in North America. More than 400 people work at the plant in Albertville, giving the city in northwest Alabama its nickname of “Fire Hydrant Capital of the World.”

The factory shooting comes amid a torrent of gun violence nationwide that has police and criminal justice experts concerned. Within hours of the Alabama gunfire Tuesday, four women were killed and four other people were wounded in a pre-dawn shooting at a home in Chicago, police said. And the toll from this past weekend included four people killed and at least 30 others wounded in mass shootings in Chicago, the Texas capital of Austin, and Savannah, Georgia.

Law officers had hoped that a spike in U.S. homicides last year would subside as the nation emerged from coronavirus restrictions, but they remain higher than they were in pre-pandemic times.

“There was a hope this might simply be a statistical blip that would start to come down,” said Chuck Wexler, executive director of the Police Executive Research Forum. “That hasn’t happened. And that’s what really makes chiefs worry that we may be entering a new period where we will see a reversal of 20 years of declines in these crimes.”

Although official data has yet to be released by the federal government, a survey of law enforcement agencies in dozens of U.S. cities conducted by the Major Cities Chiefs Association found a higher rate of homicides and aggravated assaults in January through March of 2021 compared to the same time period in 2020.

Criminologists who study the trends say the recent increases haven’t upended the decades-long crime decline in the U.S., but say it’s cause for concern. Analyses conducted by the Council on Criminal Justice have found that a “perfect storm” of factors may have contributed to a rise in homicides in 2020 that has continued into 2021. Those factors may include societal inequities exacerbated by the coronavirus pandemic, strains on gun violence intervention programs and a fraught relationship between police and communities, researchers say.

In Alabama, a maintenance worker from North Carolina arrived at the plant early Tuesday, unaware of the deadly shooting hours earlier. John McFalls said he spent five days in the plant last week and saw nothing out of the ordinary.

“Everyone here was friendly,” he told Al.com. “Radios playing, everybody getting along.”

He swallowed hard as he heard what had happened, the news site reported.

“I was thinking about coming in early this morning and getting the jump on everything,” McFalls said. “It’s kind of shocking, and then it isn’t, given the state of the world.”