Ian Pidd's parents moved into a nursing home this year, in the brief gap between Melbourne's coronavirus lockdowns. Then, two weeks later…

"The home gave us a call," he says. Mum and dad were infected. 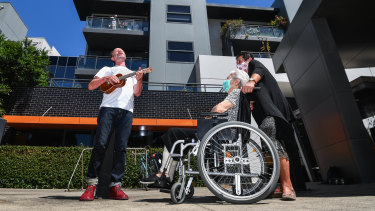 "The home got absolutely smashed [by COVID-19]," Pidd says. "I don't want to demonise it, it's a really good place, but the virus just swept through it. People died. And my father's really frail.

"We all just immediately went 'that's that'. The big spectre. Our parents are going to die and we're not going to be able to be with them."

Pidd is a performer, director, writer and producer who's been on stages, behind scenes and on arts boards for decades around Melbourne, Australia and internationally. He's not one of those people who likes feeling helpless, who accepts there's nothing he can do.

He couldn't even speak to his parents, who were too ill to pick up the phone. So he reached for his ukulele.

"OK, I'm going to go down there, find a window and I'm just going to f—ing sing."

And he did. Outside the home he sang a bunch of Beatles songs, the Paul McCartney tune I Will (Who knows how long I've loved you / you know I love you still / will I wait a lonely lifetime / if you want me to, I will). An old gospel song. A tonne of popular hits.

"My old man is from the theatre, too, so I sang a lot of musical songs that I know he knew."

He couldn't even see inside to gauge the reaction. But, past the doors he couldn't pass, his parents fought back to health. Meanwhile Pidd rang around musician friends in the area. They would play most afternoons at staff changeover, for six weeks at the height of the pandemic wave. 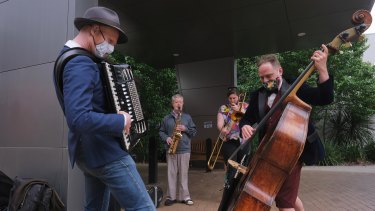 "Everyone put up their hand. Cool, amazing musicians. It was beautiful," he says. "This is what art is actually for. To create community, to create connection and comfort. As a generous gift. Something humans can share."

He's not going to claim they saved any lives. But we all know what lockdown was like, that feeling of getting through a day just by putting one foot in front of the other.

"It was like war down at that home. I'm absolutely sure we provided comfort, and I think also we fed into the courage of the residents, and the staff. We showed them there was still goodness in the situation, in the world. That what they were doing was appreciated, and there was love amid this horrendous experience."

When the doors finally opened a musician came out. A 94-year-old gentleman, who came up to them and said he had a saxophone, could he join in?

"You absolutely f—ing can, man. He can play. He's good. The carers say it's a transformation for him."

Pidd's dad has started organising play readings at the home. And Simon Abrahams, director of the Melbourne Fringe, called Pidd and asked him to put on a show. They'll be playing at six different nursing homes across Melbourne.

"The musicians [playing with me] were doing it for bottles of wine and cakes and bars of chocolate," says Pidd. "During the Fringe they're going to get paid. And that pleases me, enormously."

Tune into Big Day In via the Melbourne Fringe Facebook page at 2.30pm from 24 – 29 November to hear The Wikimen and other musical guests.