WrestleMania 36 tried a new format for viewers this year, but people still tuned in to watch The Undertaker take on AJ Styles in a Boneyard match on April 4.

As one of the night’s most anticipated face-offs, it didn’t disappoint, and fans were enthralled to see the legendary Deadman toss Styles off a metal farmhouse roof, bury him, and roll out with flames in the backdrop.

That’s the undying, supernatural magic of The Undertaker. Butwho is the man behind the mythical WWEfigure? Mark William Calaway took on the persona decades ago. Here’s a lookat his background and net worth. 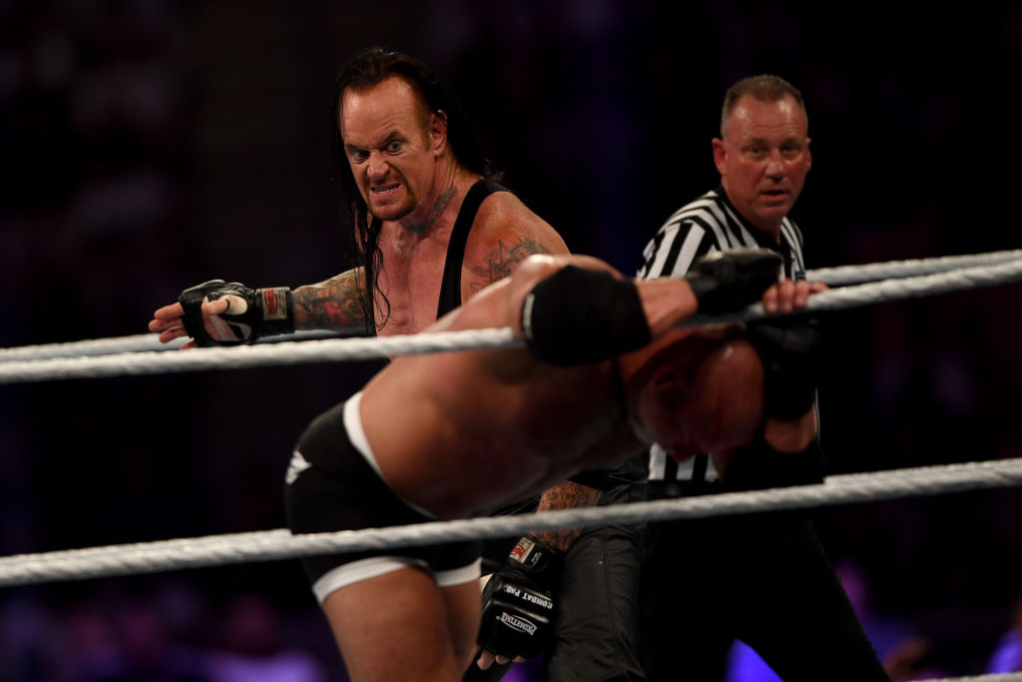 Before he was The Undertaker, Mark Calaway played basketball

That’s not so farfetched, is it? At 6’9”, Calaway played thesport in his native Texas as a high school student and in college. He attended AngelinaCollege on a basketball scholarship before transferring to Texas WesleyanUniversity.

His talents on the court caught the attention of scouts andCalaway was offered the opportunity to play professionally in Europe, but he turnedit down and chose to drop out of school his junior year. He decided to pursue wrestlinginstead, and enrolled in wrestling school, per TheBleacher Report.

How Calaway became The Undertaker

Calaway wrestled under a few different monikers before settling on The Undertaker and turning into one of wrestling’s biggest stars. Early in his career, he was Master of Pain, Mean Mark Callous, and Punisher.

He started wrestling in the late ‘80s, working with WCW and as part of a duo, but by 1990, he signed on with Vince McMahon and the then-WWF.

That’s when Calaway transitioned into The Undertaker, the brooding agent of death and deliverer of tombstone piledrivers that fans have come to know and love.

In an interview with Steve Austin, he said at the time, he didn’t know what The Undertaker was, but McMahon gave him the character and created the gimmick.

Calaway shared there was a part of him that liked darkstuff, so he figured out how to put it all together. He’s built a lastinglegacy in wrestling that’s endured for more than 30 years – false retirementsincluded. In 2020, The Undertaker is still a draw for WWE.

The Undertaker does real estate too

It’s never a bad thing to have your eggs in more than one basket, and Calaway dabbles in commercial real estate on the side. He partnered up with friend Scott Everhart to form Calahart Crossroads, an LLC with property in Colorado.

In 2006, the pair constructed the Calahart Building in Loveland and rent/sell retail space there and around the area.

He’s a family man, a philanthropist, and wrestling superstar, but The Undertaker is game to give back.

While married to Sarah Calaway, he and his former wife started the Zeus Compton Calaway Save the Animals Fund, which helped provide treatments to animals through Texas A&M University’s veterinary program. It was named after their dog, Zeus.

He’s now married to retired wrestler Michelle McCool, and they often pair up to participate in fundraising efforts for groups such as America’s Mighty Warriors and SPUR Compassion.

Per Sportskeeda, The Undertaker makes an annual salary of $2.5 million with the WWE, and also takes a cut of PPV earnings.

In addition to wrestling and real estate, Calaway earns money through speaking engagements and endorsements. According to Celebrity Net Worth, The Undertaker’s estimated net worth is $17 million.