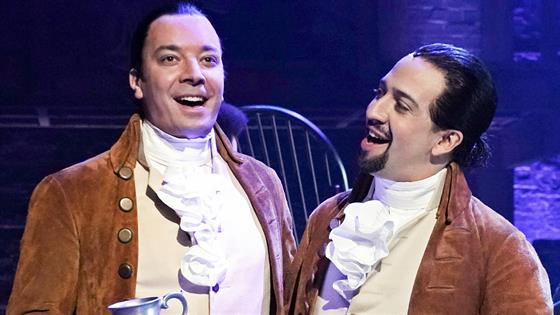 In need of some quality Hamilton content? Just you wait…

On Sunday, Lin-Manuel Miranda made one lucky Hamilton fan’s day with an epic surprise. After learning that Aubrey, a 9-year-old superfan from Florida, plans to see the hit Broadway play were canceled due to the coronavirus pandemic, the Tony winner decided to bring Hamilton to her via video chat.

In fact, John Krasinski was the mastermind behind the amazing performance. During an episode of his new YouTube show Some Good News, The Office alum came across a tweet from Aubrey’s mom that set the whole thing in motion.

“@Lin_Manuel We were supposed to see Hamilton in Jacksonville tonight—DD’s 9th bday present (seeing Hamilton has been her dream since we saw her 1st Broadway show last year), but we’re home watching Mary Poppins Returns instead. At least we’re safe & healthy,” the tweet read.

To make up for Audrey’s spoiled birthday plans, John had the adorable kiddo on his show and gifted her and her mom tickets to see Hamilton in New York once it’s safe to do so.

And, since Aubrey is a fan of Mary Poppins Returns, Emily Blunt made a special cameo as well. While chatting about the film, the young fan mentioned that she chose it because Lin-Manuel was also in it, which did not sit well with the Devil Wears Prada star.

Little did Aubrey know, Lin-Manuel was waiting in the wings and popped in during the middle of John and Emily’s debate. “Hello? Hang on a second, I was in Mary Poppins too,” he said as he “zoom-bombed” their chat, leaving Aubrey speechless.

As John explained that he gave the starstruck youngin tickets to the show, Lin-Manuel promised he could top that and began singing “Alexander Hamilton” from the play. But he wasn’t alone. Also joining Lin-Manuel’s performance was the original Hamilton cast, including Leslie Odom Jr., Anthony Ramos, and more, making for one incredible reunion.

Watch Lin-Manuel and the Hamilton cast pull off their mind-blowing surprise in the video above!