The Summer Olympics are just around the corner and, for the first time since 2000, Jamaican sprinting superstar Usain Bolt won't be on the track.

It's a strange feeling, he admitted.

"I do miss competing," Bolt told USA TODAY Sports, "but the training keeps me away. The fact that I know the work that you have to put in to be at peak shape."

Bolt retired from Olympic competition following the 2016 Games in Rio de Janeiro, capping one of the most dominant stretches for a sprinter in the history of track and field. From 2008 to 2016, he won 11 world titles and eight Olympic gold medals, and swept the 100-meter and 200-meter sprints in three consecutive Games.

In retirement, however, Bolt's longtime training regimen has been replaced by other interests. The 34-year-old is a budding musician, hoping to bring Jamaica's dancehall genre to an international audience. He's a new father, raising his 10-month-old daughter. And he's looking forward to watching the Olympics, just like everyone else.

"I’ve been competing for years. I never got a chance to cheer for my teammates," Bolt said. "So it’s something that I’m excited to watch, but I still miss the competition a little bit." 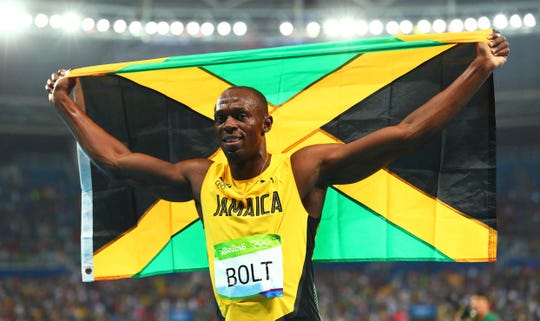 Bolt said the COVID-19 pandemic has made it difficult to predict what might unfold at this summer's Tokyo Games, which are slated to begin July 23. He's not sure who might win the sprinting events he long dominated, just because so many competitions have been canceled over the past year.

But when asked about American sprinter Noah Lyles, who won the 2019 world championship at 200 meters, Bolt called him "somebody to watch."

"For me, he looks like he wants to do great things. He's pushing himself," Bolt said of Lyles. "He talks the talk, but I’m looking forward to seeing how he’s going to match up – because he’s proven that he has the speed, just throughout the circuit and the way he’s running."

Bolt spoke to USA TODAY Sports on behalf of Gatorade, which is unveiling a new beverage that contains 10 grams of protein to aid in the recovery process.

The past year has been an eventful one for Bolt, who dabbled in professional soccer after retiring from track in 2017. His daughter, Olympia Lightning Bolt, was born on May 17. A little more than three months later, days after celebrating his 34th birthday, he tested positive for COVID-19.

Bolt described the diagnosis as a bit nerve-wracking because of the horror stories that were circulating at the time, and what the virus is capable of. But he said he had minimal symptoms and felt fine after a 14-day quarantine.

And although some athletes have expressed hesitancy about COVID-19 vaccines, Bolt said he'll "definitely" get one when it's made available to him in Jamaica.

"For sure," he said. "I have a daughter, so I’m thinking about the future and everything. I have to think about my little one, to make sure she’s safe."

That's not all Olympia has prompted him to think about. Bolt said he has already found himself thinking about his daughter's future, even years down the road.

Will Olympia want to attend a college in the U.S.? Will she want to run track, just like her dad? And if so, Bolt wonders, would he want to coach her?

"I would just explain to her how track and field is, because it’s tough," he concluded. "It consumes your time a lot. You have to work hard. So I would explain to her what it takes to be a track athlete, and then she can decide for herself if she wants to do it or not."