In a remote forest stream in East Gippsland swims a solitary Yalmy galaxia fish. She’s female, the size of an adult human finger, with mottled markings on the delicate skin of her back.

This little fish is critically endangered and she may be the last of her kind on earth. In February, right after the bushfires, she and about 400 other rare fish, crayfish and mussels were taken from the ash-clogged streams and brought to an aquatic “intensive care unit” at the Arthur Rylah Institute in the Melbourne suburb of Heidelberg. 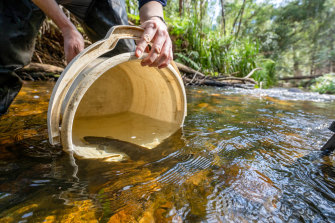 This delicate rescue mission took place because scientists were concerned the rain would wash ash, debris and sediment into waterways and suffocate or bury entire species. Some of these aquatic creatures – galaxias, East Gippsland spiny crayfish, Orbost spiny crayfish and depressed freshwater mussels – are only found in one or two streams.

This week, with the spawning season fast approaching, scientists at the institute decided it was time to return them back to their original habitat.

“It was a bittersweet moment,” says Dr Tarmo Raadik, a senior research scientist in applied aquatic ecology at the institute. “Yes, we were putting them back where they can contribute to spawning and we felt happy we were involved in a project with a really good environmental outcome. But we had become quite attached to them.”

A small number of galaxia died shortly after arriving at Heidelberg. Dr Raadik believes that was stress-related; they had grazing on their delicate skin from debris in the water. But most of the animals are now healthy, vigorous and in prime condition. 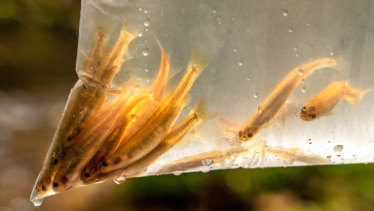 While in captivity the freshwater mussels were "very adaptable", but the crayfish – which naturally come together to fight – needed to be placed with lots of habitat (plastic tubing or mesh) to hide from each other.

The aquatic animals were carried back to East Gippsland in aerated and insulated drums, put into smaller containers and carried (sometimes up steep and remote tracks) to waterways, whose location is not widely known.

The scientists gently immersed these containers in the creeks, let the temperature match up, and gently released the animals. “Some of them looked back, others didn't,” says Dr Raadik with a laugh.

The thick layers of ash and sediment that blanketed streams in January have washed away, but it still lies on the banks. The waterways are surrounded by burnt trees and the groundcover is yet to fully return. 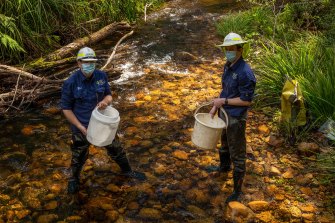 The animal rescue was funded as part of the state government’s $22.5 million bushfire biodiversity plan, and with funding from the federal government.

Environment Minister Lily D'Ambrosio said it had been a tough year for Victoria. “But the work of our scientists represents an important victory for some tiny creatures," she said.

But when the female returned to her creek this week – the only site in the world where Yalmy galaxias are found – he was nowhere to be seen.

“We hope they manage to find each other," says Dr Raadik.