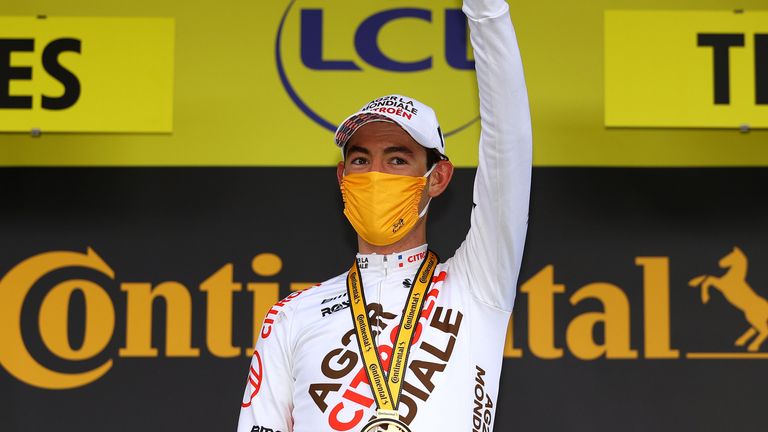 Ben O’Connor won stage nine of the Tour de France from a breakaway to move up to second overall as Tadej Pogacar used a late attack to strengthen his already commanding advantage in the yellow jersey.

Racing in miserable conditions, O’Connor raced away from fellow escapee Sergio Higuita still with 17km of the final climb up to Tignes to go at the end of the 145km stage from Cluses, eventually winning the day by more than five minutes from Mattia Cattaneo.

The 25-year-old Australian, making his Tour debut, briefly threatened to take yellow from Pogacar given the breakaway’s advantage, but a late attack from the Slovenian once again underlined his clear status as the dominant rider in this race heading into Monday’s rest day.

Pogacar took sixth place on the stage, 32 seconds ahead of Richard Carapaz, and now leads overall by two minutes and one second from O’Connor, with Rigoberto Uran the next closest challenger at five minutes and 18 seconds down.

Donning yellow in the Tour comes with considerable burdens – at least an hour of extra media duties each day, not to mention the need to control the peloton and defend it on the road – and at one point it appeared Pogacar might have been happy to hand it over, at least temporarily.

UAE Team Emirates, riding on the front of a much-reduced group of favourites, allowed the gap to O’Connor – who began the day eight minutes and 13 seconds down in 14th, to grow on the final climb, the margin hovering just over eight minutes.

The Ineos Grenadiers, including a revitalised Geraint Thomas after his struggles on Saturday, took up the chase to try to keep the pressure on, but Carapaz had no response when Pogacar put in an attack two kilometres from the top of the climb as he raced away to impose himself further.

The finish in Tignes – the town due to host the finish of stage 19 two years ago before landslides blocked the road on the day Egan Bernal moved into yellow – put into focus the big names missing from the day.

Primoz Roglic and his Jumbo-Visma squad had used the ski resort for their pre-Tour altitude camps, spending weeks here in the build-up to the race, but he would not make it this far as he abandoned the race before the start of the stage.

The Slovenian, one of the major favourites for yellow, was part of a group that finished 35 minutes down on Saturday as the impact of a stage three crash took their toll, and has opted to withdraw and try to recover in time for the Olympics at the end of the month.

Mathieu Van Der Poel, whose six-day spell in yellow ended on Saturday, also made the same decision as he brought his Tour debut to an end.

Thomas, who was alongside Roglic in the grupetto on Saturday to bring his own hopes to an end, admitted before the stage began that he might too need to consider an early exit.

But given the way the Welshman rode on Sunday, guiding Carapaz up the final climb and helping keep the heat on Pogacar, it very much appears he still has a role to play for the Grenadiers.