If there's one thing we've learned from the coronavirus pandemic, it's a newfound respect for the very, very small.

But as dangerous as the microscopic universe can seem, it's also rich with stunning shapes, brilliant colors, and often mysterious biological and physical processes.

In that spirit, Nikon has released the winners of Small World: the camera company's 46th microscopy, or microscope photography, competition.

Judges Dylan Burnette, Christophe Leterrier, Samantha Clark, Sean Greene, and Ariel Waldman reviewed more than 2,000 entries from scientists, artists, and hobbyists from 90 countries around the world. All have to be taken with microscopes using optical imaging techniques. They include a rainbow snail tongue, a self-replicating worm, and – appropriate for the Halloween season – a spooky-looking bat embryo skeleton.

Here are the best microscope pictures of the year and what they show.

First place went to an image that revealed a stunning truth about zebrafish.

The photo isn't just gorgeous and technically perfect: It also led researchers to a groundbreaking discovery.

The orange in the photo represents the zebrafish's lymphatic system, the network of vessels that carry white blood cells through the body. Previously, scientists thought that only mammals had lymphatic vessels inside their skulls. But with this photo, photographers Daniel Castranova and Bakary Samsara at the National Institutes of Health show that zebrafish have those vessels too.

Because fish are so much easier to raise and conduct experiments on than mammals, this discovery could revolutionize research around treatments for brain-related diseases, like Alzheimer's disease and brain cancer.

An exquisite image of a clownfish embryo over time, from hours after fertilization to hours before hatching, took second place. 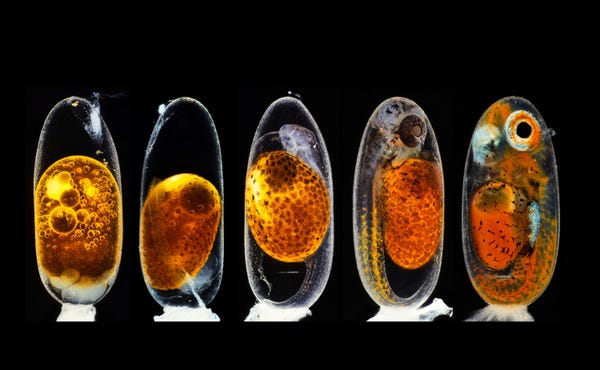 A rainbow image showing the ridged tongue of a freshwater snail came in third. 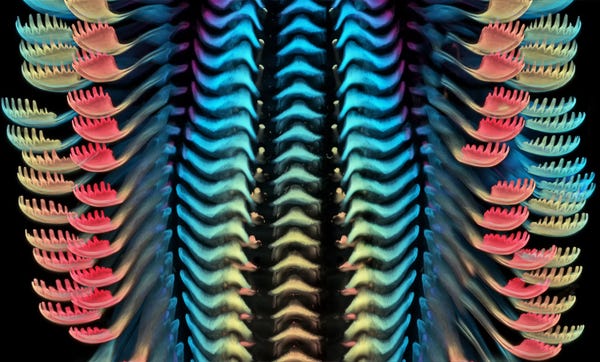 Here are the rest of the 20 winners:

4. Stringy filaments and spores of a soil fungus. 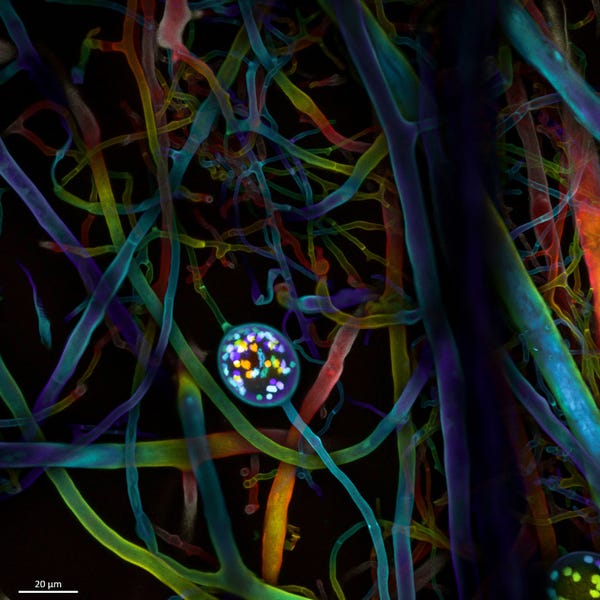 5. The feathery, huge-eyed profile of a bogong moth. 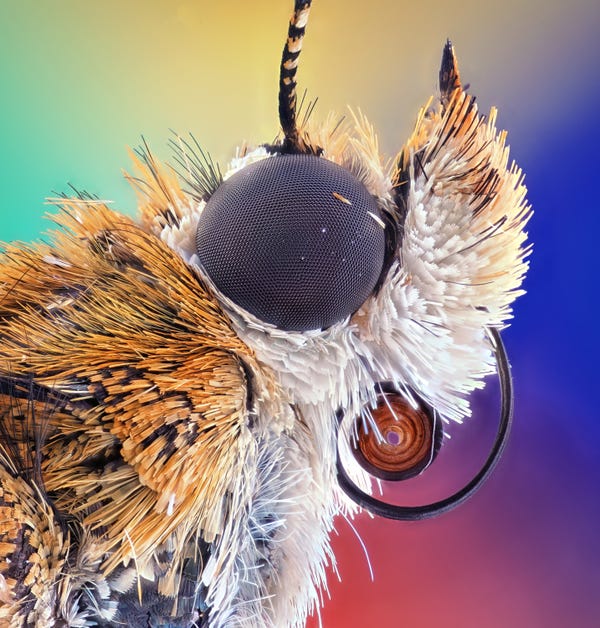 6. The anther – or pollen-containing section – of a Hebe shrub's flower. 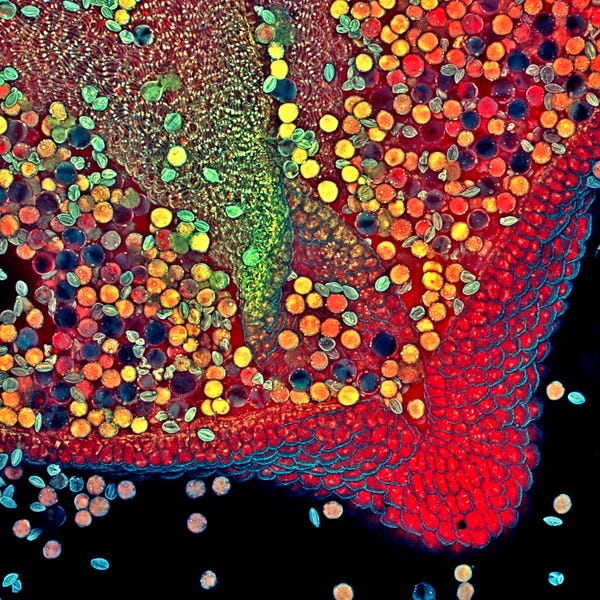 7. A thicket of tiny microtubules within a cell, surrounding the egg-shaped nucleus. 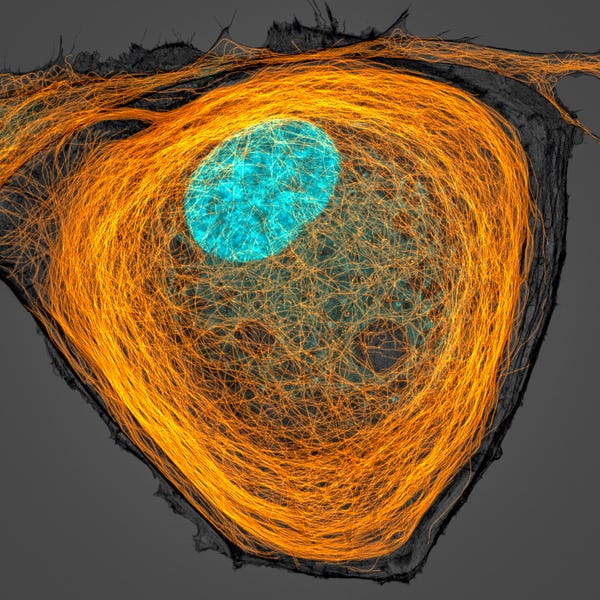 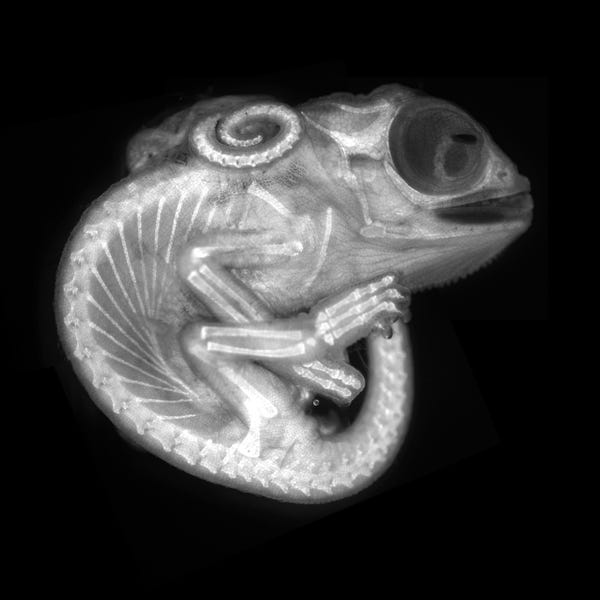 9. Connections between brain cells that look a bit like lightning. 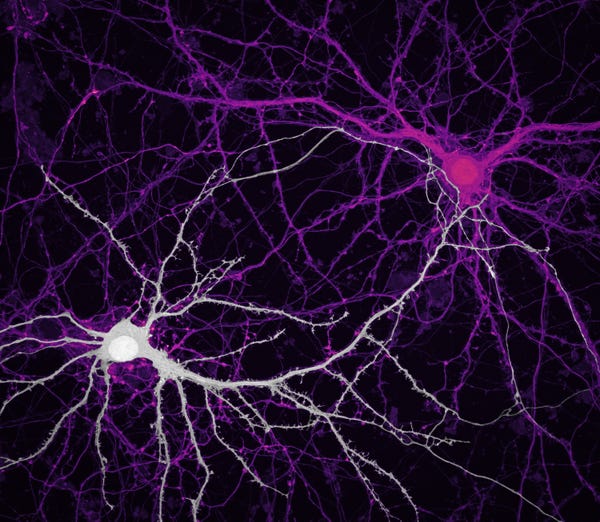 10. Daphnia magna, a crustacean that's smaller than a pencil eraser. 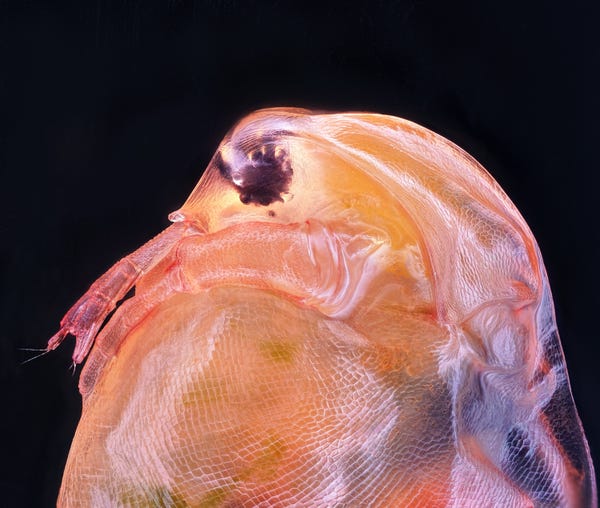 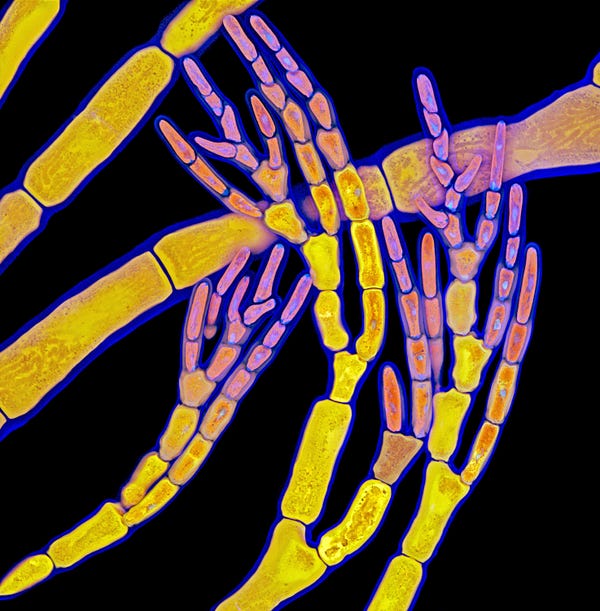 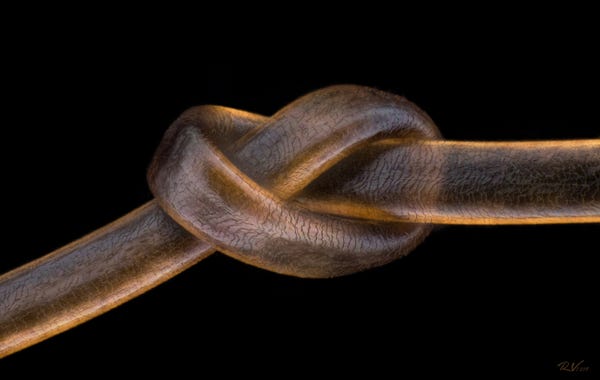 13. A dreamlike image of crystals formed after heating a solution of amino acids used in muscle building. 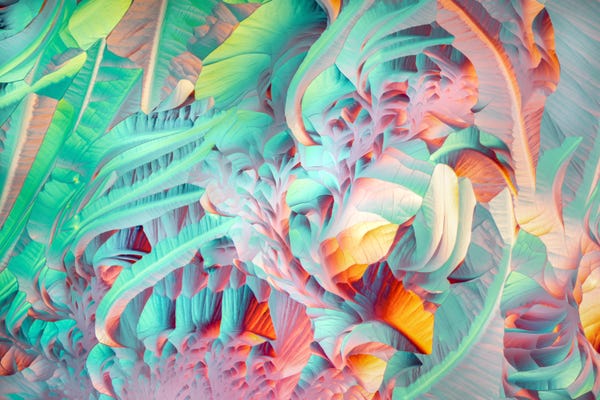 14. The side view of an intrepid, iridescent leaf roller weevil. 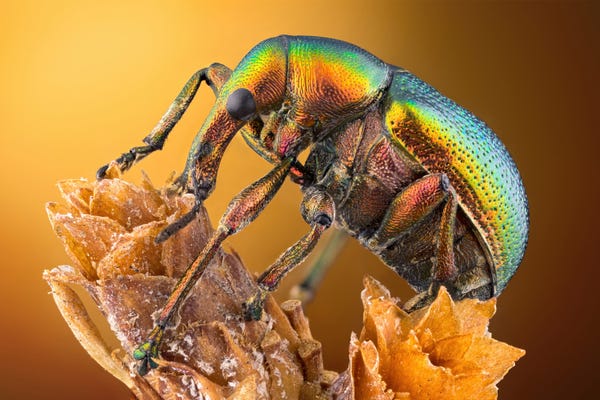 15. A chain of developing Chaetogaster diaphanus worms, which reproduce asexually by multiplying themselves. 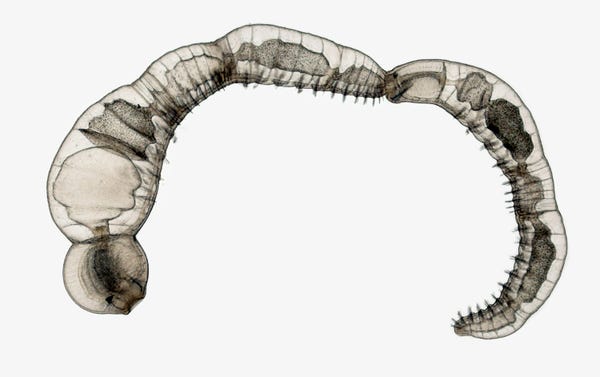 16. The intricate net of a nylon stocking, magnified nine times. 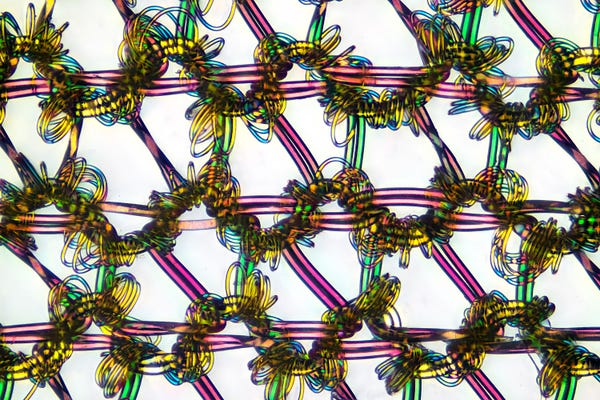 17. A pastel portrait of a water boatman, a type of aquatic insect with oar-like legs. 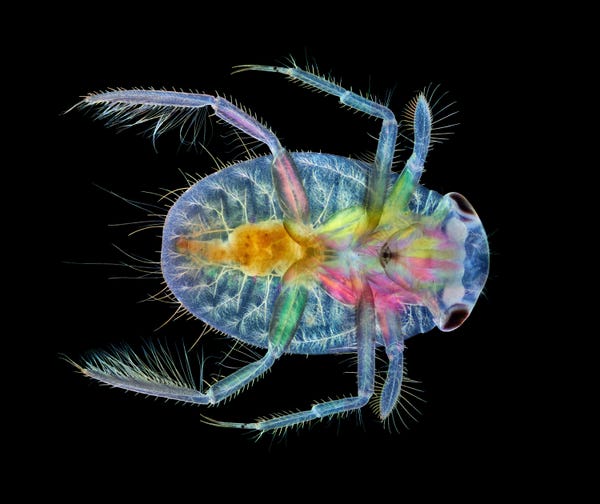 18. The fuzzy outline of an Atlas moth wing.

19. The perfectly round cell wall of Arachnoidiscus sp., a type of microscopic floating algae. 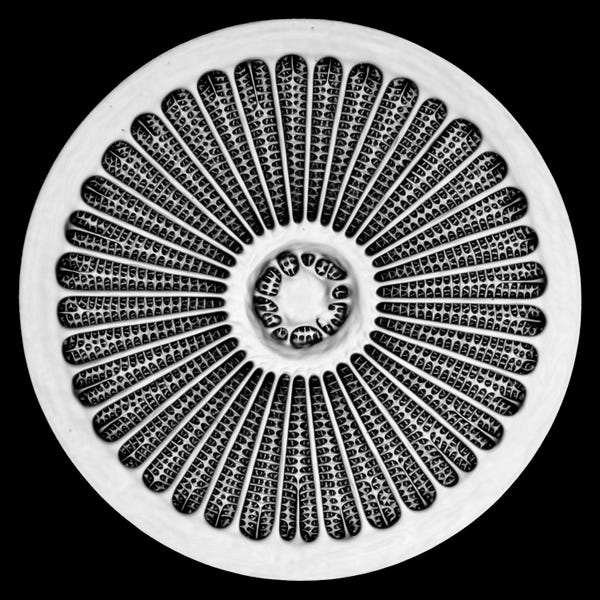 20. A Halloween-esque image of a fruit bat embryo skeleton. 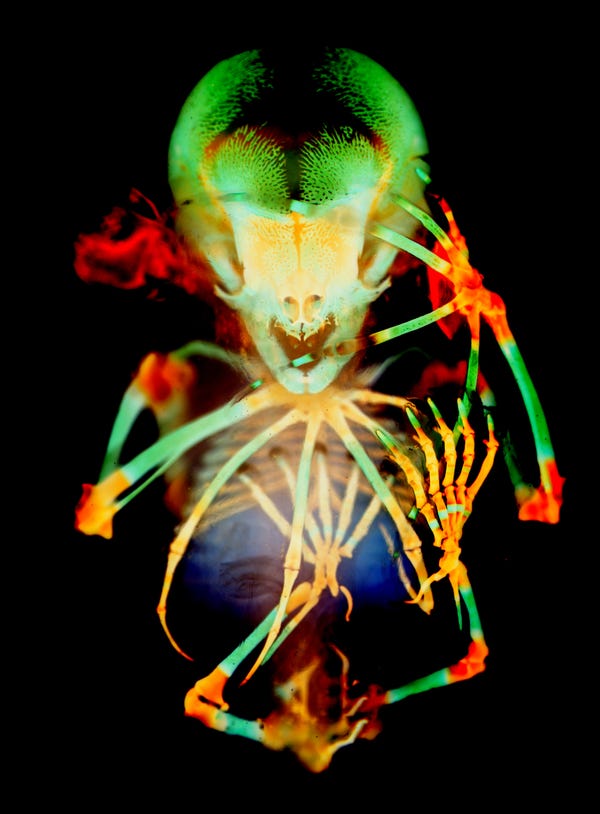