The lesson of the European Super League debacle?

Cue Billy Birmingham doing Richie Benaud: “I am sorry everyone, I am just going to have to go with me on this one. On this subject, I couldn’t agree with me more.” 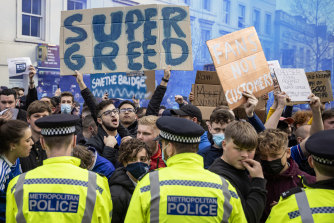 The Super League idea lasted all of three days before being abandoned due to fan unrest.Credit:Getty

The lesson is that when all is said at done, in a clash between the owners, the TV people, the players, the agents, the sponsors, the marketeers and … the fans, it is the fans who, when they are united, win every time.

All your billions, all your marketing power, all your spin doctors, all your signed contracts for a whole new competition, last as long as a fart in a strong wind when the mob is collectively pissed off.

And on this one they were! Good to see.

What’s in a name?

As you know, TFF has long gloried in the sheer creativity of the nicknames given to Australian sports people. But one more time for the road, you will recall that Steve and Mark Waugh were “Tugga” and “Afghanistan” for many and many a’moon, the latter because for a long time he was “the forgotten Waugh.” (Geddit? Geddit?<geddit?>) And older readers will remember the fullback for the Newtown Jets, Phil <geddit?>“Siggsy” Sigsworth, was known as “Whatsapacketta”, just as the Newcastle Knights centre Matt Hilder, was of course “Waltzing” and Nick Farr-Jones was to some of us “Kick-Too” Farr-Jones.</geddit?></geddit?>

Former Wallaby hooker and Manly coach, the late Bruce Malouf used to be known as “Tow-Truck” because he was always at least half-way to a breakdown, while who can forget Glenn Lazarus being known as “Brick With Eyes”, courtesy of Roy and HG. The best of the lot though, was first told to me many years ago by Mike Carlton. The ABC cricket broadcaster Neville Oliver was affectionately known by his colleagues as “Fart-in-the-bath”. Why? Well, try saying his name quickly, over and over.

All up, we Australians have traditionally been even ahead of the English, notwithstanding the English football player Fitz Hall now known as “One Size”, and the former Everton legend Neil Pointon, being universally addressed as “Dissa”. I don’t even care that the famed and beloved English fast bowler Gladstone Small – known for being rather on the neckless side of things – was affectionately known as “Pearl”, as in Pearl neckless!

Which brings me, oddly enough, to Valentine Holmes of the Cowboys who was asked this week about Chad Townsend joining the club to replace Michael Morgan, and join Scott Drinkwater in the halves.
“It was difficult to lose a player like ‘Morgo’,” Holmes said, “so to be able to secure Chad is a great buy for us. He will be the perfect game manager to allow ‘Drinky’ and I to attack where we need to.”

All this, while Dallin Watene-Zelezniak was talking about team-mate Jack Hetherington becoming the first Canterbury Bulldog sent off since Sonny Bill Williams in 2007: “He was quiet after the game. Social media can be brutal. But I wouldn’t trade ‘Hethero’ for anyone.”

What is Australian sport coming to?

No, I don’t know who the Leaguie having sex in the toilet was – the one circulating on the internet this week – and nor do I care. It is exactly like the Todd Carney “bubbler” episode. I wish they wouldn’t do that, you wish they wouldn’t do that, but it is none of our damn business. As long as the toilet tryst was consensual, and the woman concerned was over 16, the real issue – just as it was with Carney – the person who captured the images and then distributed them. That is the person who must be vigorously pursued, and by the police, not the NRL integrity unit.

Loved that quote from Trent Merrin on suddenly retiring from the Dragons at the age of 31: “It will leave a bit of a hole, but as a chubby kid from St Peters, I think I’ve done and excelled at everything I wanted to achieve.” 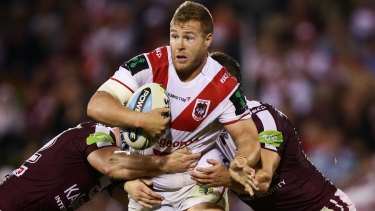 Merrin played 13 Origins for NSW and seven Tests for Australia in his 11-year first-grade career.Credit:Getty

It reminded me of a quote from former Highlander Nick Evans, as he left NZ rugby a decade ago to take up with the Harlequins in London.

“For a skinny white guy I have done well, there are not many of us little chicken-leg guys around.”

Yonks back at a lunch in Canberra I remember the great Australian fast bowler Jeff Thomson telling me how in his early days in grade cricket, his favourite day of the year would be when his Bankstown Cricket Club would play the Mosman boys at what is now Allan Border Oval. He and Lenny Pascoe would roar into the carpark in their Holdens with surfboards on the roof – Westies bent on trouble – and then create holy hell out on the pitch for the Mosman lads, as from both ends they sent down barrages of bouncers that were world class.

This week as it happens – in the lead up to the Chappell Foundation dinner at the SCG on 12 May – I heard from Greg Chappell just how it was that Thomson left Bankstown to become a Queenslander. In his debut against Pakistan in 1973, an injured foot saw him only manage 0-100. The next season even NSW turned their back on him, as the selectors were jack of him and Lenny Pascoe going surfing before club games. But in the last game of the season, against Chappell’s Queensland side, the selectors relented and gave Thommo another go. Queensland only required first innings points to win the Shield for the first time, which looked like easy picking when they got NSW out for a modest 249.

But no so fast. Enter Thommo, steaming in from the Randwick end. In 20 terrifying overs, he picked up 7-85 and Queensland were all out for 200!

“Thomson,” Chappell tells me, “was not happy with his treatment at the hands of the NSW selectors, and had been quoted in the SMH that morning as saying this would be his last game for the blue baggers. He wasn’t going to have his ‘career ruined by these galoots’ or words to that effect.”

At the end of the day’s play, Chappell made his way to the NSW dressing room to have a beer with Thommo. Over the beer Chappell asked if he was serious about leaving?

“Would you come to Queensland?”

Chappell dashed to the top deck of the SCG Members Stand where the chairman of Queensland Cricket sat with members of the QCA executive. Chappell excitedly told the chairman that Thommo was keen to come to Queensland.

“What does he want?”

“He wants a job, a car, somewhere to live and a club to play for. And I for one, think we should shift heaven and earth to get him there because I don’t want to bat against him again!”

And they all went on to live happily ever after.

Real Madrid President Florentino Perez at the beginning of the week: “Football is the only global sport in the world with more than four billion fans and our responsibility as big clubs is to respond to their desires.”

Perez, a couple of days later, after the shattering response to their Super League plans: “We’ve been working on this project for three years . . . I’ve never seen so much aggression, it’s as if it were orchestrated, it surprised us all. I’ve been in football for 20 years, it’s an aggression I’ve never seen in my life. We’ve had threats, it’s like we killed someone, killed football.”

Leeds forward Patrick Bamford nails it, on Super League: “I can’t quite comprehend [it]. It’s amazing the amount of uproar when somebody’s pocket is being hurt. It’s a shame that doesn’t happen with issues like racism.”

Charles Barkley when Shyla Heal, the daughter of Shane Heal was drafted by the Chicago Sky with pick eight of the WNBA draft: “Shane Heal, I want to congratulate you on your daughter, but you are so lucky I didn’t kill your ass at the Olympics.” Charmed, we’re sure.

Australian batter Beth Mooney on being given the 2021 Leading Woman Cricketer in the World award by Wisden: “I don’t want that tag. I just want to be me, and fly under the radar.”

Queensland Premier Annastacia Palaszczuk on the Gabba being the centerpiece of the Olympic bid: “We do need this, and it’s going to be utilised for the future, so they don’t want white elephants they want workhorses, and the Gabba is definitely a workhorse.” I think this is that rarest of beasts: the mixed metaphor that works, and is a bit brilliant.

Peter V’landys at the Tommy Raudonikis memorial: “If you take the Macquarie Dictionary and look up selflessness, you’ll find Tommy.” Nah. Tommy was many things, but I think the word you’d start with is ruthless.

Carlton great Mark Maclure, after his side were beaten by Port Adelaide by the usual 30 points or so: “What do they actually stand for? They have to ask themselves that question – what do we stand for? What does the club stand for? It’s been 20 years of rubbish.”

NRL head of football Graham Annesley: “[The concept of independent doctors] doesn’t make any sense because doctors are independent by their very nature. They’ve trained for decades in most cases . . . to first and foremost protect the welfare and interests of their patients, in this case, the players.” Graham, what about every doctor in cycling, athletics, etc who issued drugs so their team could win, and more to the point all the NFL doctors who disgraced themselves on the issue of concussion – not to mention, historically, doping them to the eyeballs with steroids?

High jumper Nicola McDermott on being the first Australian female to clear the two-metre mark: “What was written was fearless hearts are birthed in perfect love and that’s from Jesus and 1 John 4:18. That’s been my verse because I was always scared of two metres. I knew in my body I could do a lot higher but the fear aspect of high jump is the thing that gets to you with the mind.”

Team of the week

Brianna Davey and Kiara Bowers. Tied as the best and fairest for the AFLW season.

Domingo Miotti. Kicked a penalty goal after the siren to guide Western Force to victory over the Waratahs. If his nickname isn’t Placido, there needs to be an inquiry.