It's a big achievement to win an Oscar. But in 2021, it may be an even bigger achievement just to stage them.

We're now nearing the end of a disastrous movie year in which the release calendar has melted before our eyes and theaters have been left in dire straits because of a still-raging pandemic. This is not exactly "Hooray for Hollywood" material, but Oscar season has begun anyway, albeit with new rules that allow for streaming-service debuts and a ceremony that has been pushed two months past its usual date to April 25. 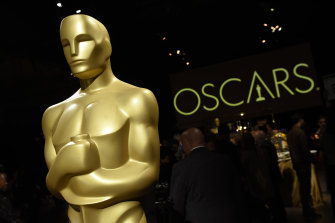 The Oscars will look very different in 2021.Credit:Chris Pizzello/Invision/AP

Who will be nominated, elected or vaccinated by then? It would be a tall order to forecast all three of those fraught outcomes, so let's just stick with the Oscars. Here are four ways I expect Hollywood's hallowed gantlet to play out during the most unusual period of our lives:

1. Big-budget movies will be scarce

In the face of dwindling broadcast ratings, ABC has prodded the academy for category tweaks that will allow more blockbusters to be featured. Still, with the box office curtailed since March, bona fide hits will be few and far between.

Major potential contenders like West Side Story and Dune have already been shuttled to 2021, and even some of the starriest specialty titles, like Wes Anderson's The French Dispatch, have opted to sit out the season entirely instead of pivoting to a digital debut. Universal is so far holding fast to a Christmas Day theatrical release for its Tom Hanks western, News of the World, from Captain Phillips director Paul Greengrass, but another big release earmarked for that holiday, Wonder Woman 1984, is widely expected to fly to 2021.

All that big-studio scarcity could create an opening for Pixar's Soul, which was plucked from the theatrical calendar and recommissioned for a debut on Disney+ in December. With a diminished field of would-be blockbusters to choose from, Soul may sneak in and become the first animated film nominated for best picture since Toy Story 3 in 2011. 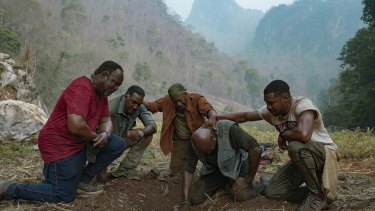 Don't expect a full slate of titles from hot distributors like A24, Neon and Searchlight: With moviegoing still a dicey proposition during the pandemic and production calendars largely stalled, smaller studios have mostly elected to keep their powder dry.

Among titles still to be released, A24 will mount a push for the moving immigrant drama Minari, which won pre-pandemic plaudits at the Sundance Film Festival in January, but the studio's Joaquin Phoenix vehicle C'mon C'mon, once eyed for a late-2020 debut, won't be seen until next year. Similarly, Searchlight's Nomadland and Neon's Kate Winslet-Saoirse Ronan romance Ammonite will serve as their distributors' main hope to score multiple nominations, even as other enticing options may be kept in reserve for 2021.

Meanwhile, the theatrically unfettered Netflix will try to gobble up even more best-picture nominations than the three it managed last year. In addition to Da 5 Bloods and Ma Rainey's Black Bottom (featuring an Oscar-worthy Chadwick Boseman performance), Netflix will push David Fincher's forthcoming black-and-white Hollywood tale Mank and Aaron Sorkin's historical drama The Trial of the Chicago 7, which Paramount sold off to the streamer. Netflix will also have The Prom (a Ryan Murphy musical starring Meryl Streep), Pieces of a Woman (with a wrenching performance by Vanessa Kirby of The Crown) and Hillbilly Elegy (an adaptation of the J.D. Vance book starring Amy Adams and Glenn Close) in play for acting nominations.

In other words, it's a streamer's market. Old-school Oscar voters who have tried to mount a bulwark against the incursion may finally have to wave the white flag. Along with Netflix's many awards-season possibilities, the streamers Amazon (One Night in Miami …), Apple TV+ (Cherry, On the Rocks, Boys State) and Hulu (Palm Springs) will all try to take advantage of a landscape that has radically tilted in their favour this year.

4. Nothing will look the same

Oscar season is usually a wild and woolly adventure made up of riotous standing ovations, glitzy parties fuelled by champagne, and face-to-face emotional connections that make the whole damn thing worthwhile.

Suffice it to say, you won't get any of that over Zoom.

The awards circuit will eventually adapt to voters' stay-at-home reality, but the barometer of buzz will be harder to track when applause and box office can no longer be conclusively measured. I remember the entire theatre gasping at Sundance when the plot took a turn in the Anthony Hopkins dementia drama The Father (set for December), but will it play the same way when a voter is watching the film by himself, with his dog in his lap and sunlight streaming in from the living-room window?

Sure, Oscar voters have long made use of at-home screeners, but they were usually counterbalanced by in-person screening plans so robust that many Oscar campaigns were won on them: The Shape of Water never would have proved victorious without Guillermo del Toro's contagious passion for the film, as evidenced at post-screening Q&As.

Without any of the usual bench marks, no contender can truly be counted out until the bitter end: Not upcoming films like Ammonite and French Exit, which earned polarised festival reviews but still boast attention-getting performances from Winslet and Michelle Pfeiffer, respectively; not even Tenet, which was more witheringly received than Christopher Nolan's last best-picture nominee, Dunkirk, but was, for a stretch, the only movie anyone was talking about. 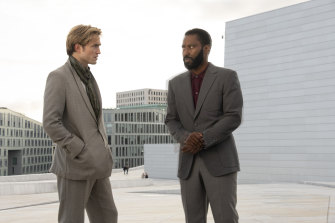 The ceremony will almost certainly look different, too. It's anyone's guess how this pandemic-stricken country will be faring in late April, but sardine-packed red carpets and crowded awards-show ballrooms will probably have to be modified to allow a smaller, more distanced cohort to assemble.

Will the Oscar telecast take cues from the Emmys, where presenters showed up onstage but couture-clad nominees stuck it out in their living rooms? And would a disjointed ceremony like that benefit from a strong host, even though the Oscars have recently gone without one?

We'll find out, eventually. From this far-off vantage point, only one thing is certain: If the Oscars always reflect the year they were voted on — for better and for worse — this one's still got a few more wallops left to come.