Cienan Muir is a Yorta Yorta and Ngarrindjeri man and… “I’m a nerd”.

They were two parts of his identity. But with next month’s official launch of his company Indiginerd, he hopes to bring them together and build a bridge between traditional and pop culture. 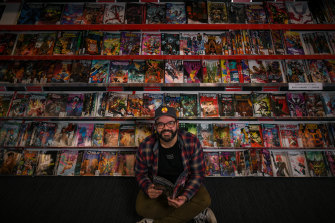 They’re going to get together at Fortress Melbourne, the city’s huge video games venue, on August 20. There will be a welcome to country, some games of Overwatch (for the non-nerds, that’s a popular online first-person shooter video game). There will be giveaways and some chat about comics and gaming.

“Just a bunch of deadly black businesses, showing us what they’re doing in the space,” says Muir.

It’s the next big step in his big dream, he says.

“There’s always been a missing platform within our country to connect our generations based on pop culture passions. I don’t think our communities have really discussed the world of pop culture, what influenced them growing up, what their passions are.”

“Pop culture is the vessel, and the message is very much whatever we want it to be.” A video game, for example, could be used to revitalise a traditional language.

Muir grew up reading comic books. Boyhood leukemia put him in hospital for a year and he survived with a stack of them, which launched “an obsession”. He doesn’t want to think about how much he’s spent on them over the years.

But he also started thinking about what was missing in them: and in gaming, in the gaming industry, in the film industry.

And just when he was thinking “what if there could be an Indigenous comic convention”, he discovered there already was one, in America, so he went to have a look.

“I loved it,” he says. “It was such a new perspective on the world of pop culture.”

He saw Star Wars dubbed into a Native American language. He saw young people connecting with their elders through discussions of the Marvel universe.

“And I just thought, this is definitely something we need over here,” he says.

In 2019, he staged an Australian offshoot of Indigenous Comic Con. It was a lot of work, and hard to find sponsorship, hard to deal with concepts such as racism and hate, to make sure it was a safe space for everyone, to makes sure there was a proper gaming tournament and that the “cosplay parade actually went according to plan” (he’s a big cosplayer himself, he finds a personal freedom in “walking the streets of Melbourne with absolutely no shame” dressed as a blue alien).

Muir is sharing his story this NAIDOC week as part of the Victorian government’s Deadly & Proud campaign, which aims to encourage pride in Aboriginal cultures, resilience and communities in the lead up to a treaty.

Now he’s in talks over the next step: another Comic Con, location and dates TBA, and more events beyond the August launch.

“I think that comes as second nature to a culture that has been original storytellers on this planet for so long.”