The sway of the Matterhorn: Huge mountain in the Alps moves gently back and forth about once every two seconds due to seismic energy in the Earth, study reveals

The seemingly unyielding edifice that is the Matterhorn — one of the highest summits in the Alps — actually moves back and forth about once every two seconds.

This is the conclusion of researchers led from the Technical University of Munich who measured the ordinarily imperceptible vibrations of the iconic mountain.

The movements, the team explains, are stimulated by seismic energy in the Earth that has its origins in the world’s oceans, earthquakes and human activity.

The Matterhorn sits on the border between Switzerland and Italy and summits at 14,692 feet (4,478 m) above sea level, overlooking the town of Zermatt.

Scroll down for videos 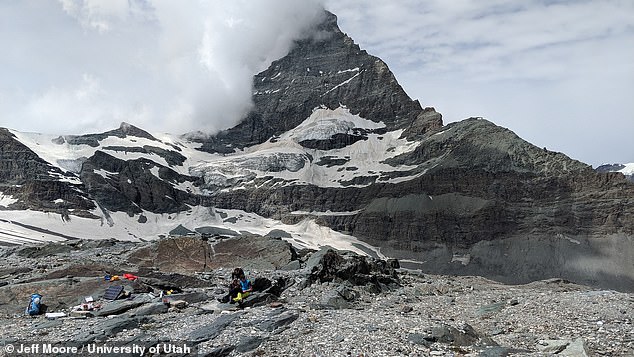 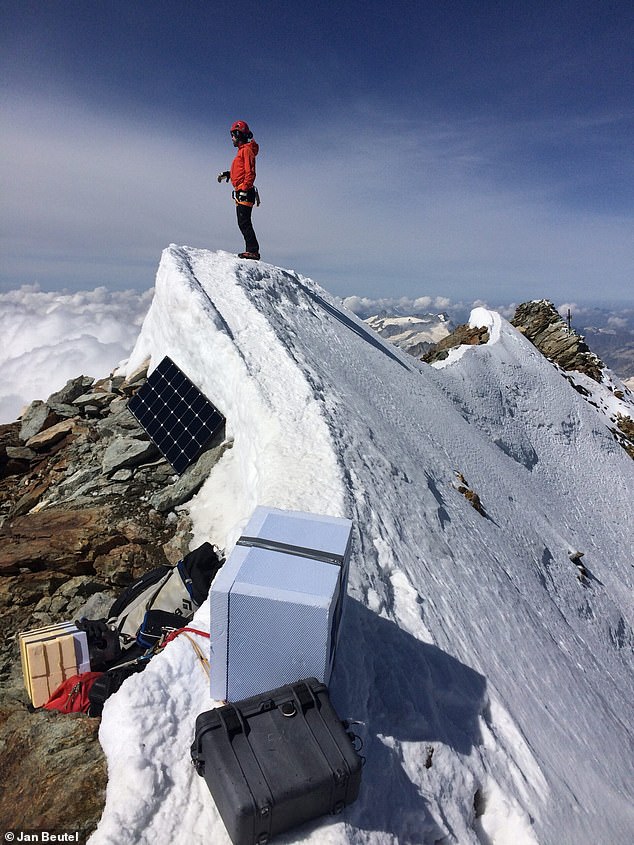 This is the conclusion of researchers led from the Technical University of Munich who measured the ordinarily imperceptible vibrations of the iconic mountain. Pictured: a seismometer is installed at the summit of the Matterhorn

WHAT IS THE MATTERHORN?

The Matterhorn is a mountain in the Alps which sits on the border between Switzerland and Italy.

The Matterhorn was first referred to in writing as ‘Mont Cervin’ in 1581, and later also as ‘Monte Silvio’ and ‘Monte Servino’.

The German name ‘Matterhorn’ first appears in the year 1682.

Between 1865 and the end of the summer season 2011, an estimated 500 climbers died on the Matterhorn.

Every year, between 300 and 400 people attempt to climb the peak with a guide; of them, about 20 fail to reach the summit.

Roughly 3,500 people tackle the Matterhorn without a guide each year; some 65 per cent turn back en route, usually because of lack of fitness or an insufficient head for heights.

From tuning forks to bridges, all objects vibrate when excited at their so-called natural frequency, which depends on their geometry and material properties.

‘We wanted to know whether such resonant vibrations can also be detected on a large mountain like the Matterhorn,’ said paper author and earth scientist Samuel Weber, who conducted the study while based at the Technical University of Munich.

To find out, Dr Weber and colleagues installed several seismometers on the Matterhorn, the highest of which was located just below the summit, at an altitude of 14,665 feet (4,470 meters) above sea level.

Another was positioned in the Solvay bivouac — an emergency shelter on Hörnligrat, the Matterhorn’s north-eastern ridge, that dates back to 1917 — while a measuring station at the foot of the mountain served as a reference.

Each of the sensors in the measurement network was set up to automatically transmit its recordings of any movements back to the Swiss Seismological Service.

By analysing the seismometer readings, the researchers were able to derive the frequency and resonance of the mountain’s resonance.

By speeding up the measured vibrations 80 times, the team were able to make the Matterhorn’s ambient vibrations audible to the human ear — as presented in the video below. (Headphones are recommended for the very low frequency sounds.)

On average, the Matterhorn’s movements were small, in the range of nanometres to micrometres, but at the summit, they were found to be up to 14 times stronger than those recorded at the the foot of the mountain.

The reason for this, the team explained, is that the summit is capable of more free motion while the foot of the mountain is fixed, rather akin to how the top of a tree sways more in the wind.

The team also found that the amplification of the ground motion further up the Matterhorn carried over to earthquakes, too — a fact, they added, which may have important implications for slope stability in the case of a strong seismic even.

‘Areas of the mountain experiencing amplified ground motion are likely to be more prone to landslides, rockfall and rock damage when shaken by a strong earthquake,’ said paper author and geologist Jeff Moore of the University of Utah. 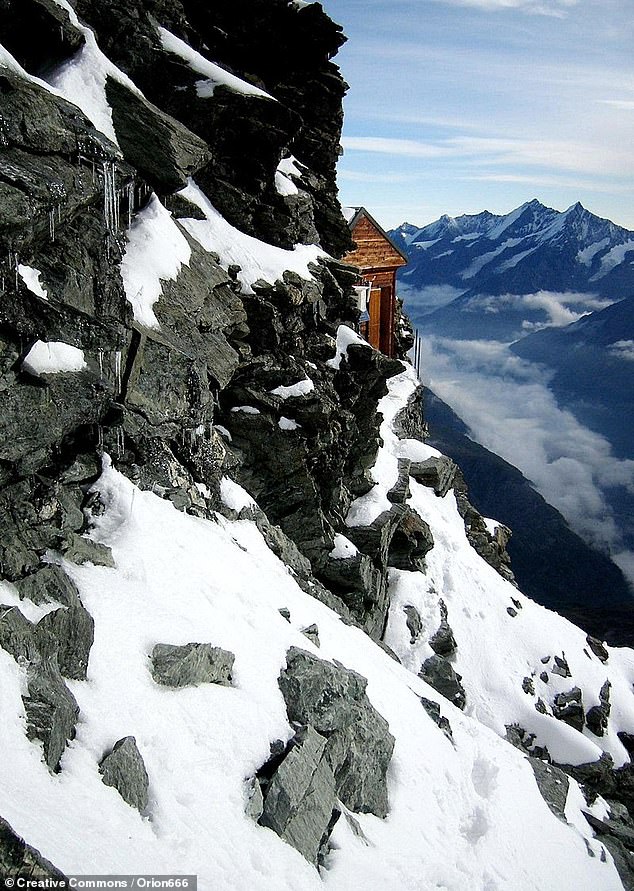 One seismometer is positioned in the Solvay bivouac (pictured) — an emergency shelter on Hörnligrat, the Matterhorn’s north-eastern ridge, that dates back to 1917 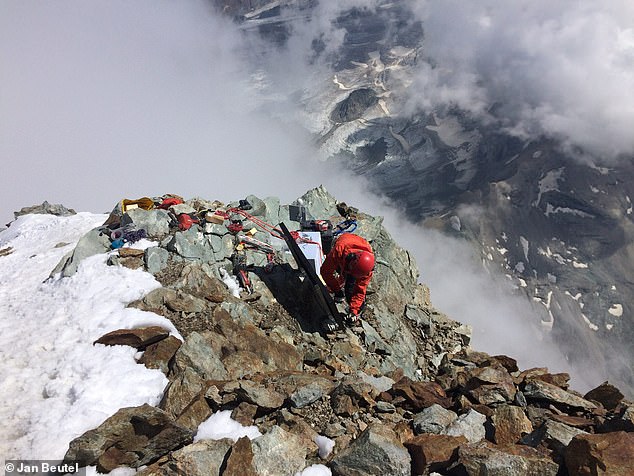 The movements, the team explains, are stimulated by seismic energy in the Earth that has its origins in the world’s oceans, earthquakes and human activity. Pictured: a seismometer is installed at the summit of the Matterhorn

Vibrations such as the team detected are not unique to the Matterhorn, with many peaks expected to move in a similar fashion, the team said.

In fact, as part of the study, researchers with the Swiss Seismological Service carried out a complementary survey of the central-Swiss peak of Grosse Mythen, a mountain that is shaped similarly to the Matterhorn but is significantly smaller.

Analysis reveals that the Grosse Mythen oscillates at a frequency some four times higher than the Matterhorn, because smaller objects vibrate at higher frequencies than larger objects.

These examples represents one of the the first time that the team have examined the vibrations of such large objects, with previous studies having focussed on small entities, such as rock formations in the Arches National Park in Utah.

‘It was exciting to see that our simulation approach also works for a large mountain like the Matterhorn and that the results were confirmed by measurement data,’ commented Professor Moore.

The full findings of the study were published in the journal Earth and Planetary Science Letters. 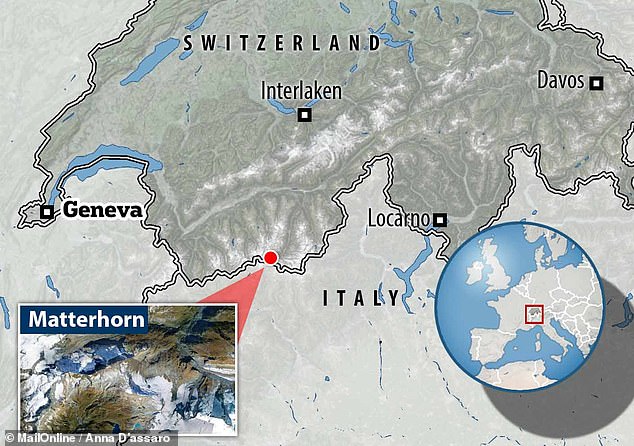 The Matterhorn — which sits on the border between Switzerland and Italy — summits at 14,692 feet (4,478 m) above sea level, overlooking the town of Zermatt

EARTHQUAKES ARE CAUSED WHEN TWO TECTONIC PLATES SLIDE IN OPPOSITE DIRECTIONS

Catastrophic earthquakes are caused when two tectonic plates that are sliding in opposite directions stick and then slip suddenly.

Tectonic plates are composed of Earth’s crust and the uppermost portion of the mantle.

Below is the asthenosphere: the warm, viscous conveyor belt of rock on which tectonic plates ride.

They do not all not move in the same direction and often clash. This builds up a huge amount of pressure between the two plates.

Eventually, this pressure causes one plate to jolt either under or over the other.

This releases a huge amount of energy, creating tremors and destruction to any property or infrastructure nearby.

Severe earthquakes normally occur over fault lines where tectonic plates meet, but minor tremors – which still register on the Richter sale – can happen in the middle of these plates.

These are called intraplate earthquakes.

These remain widely misunderstood but are believed to occur along minor faults on the plate itself or when ancient faults or rifts far below the surface reactivate.

These areas are relatively weak compared to the surrounding plate, and can easily slip and cause an earthquake.

Earthquakes are detected by tracking the size, or magnitude, and intensity of the shock waves they produce, known as seismic waves.

The magnitude of an earthquake differs from its intensity.

The magnitude of an earthquake refers to the measurement of energy released where the earthquake originated.

Earthquakes originate below the surface of the earth in a region called the hypocenter.

During an earthquake, one part of a seismograph remains stationary and one part moves with the earth’s surface.

The earthquake is then measured by the difference in the positions of the still and moving parts of the seismograph.