Netflix’s “Mank” has introduced the late screenwriter Herman Mankiewicz to reams of people, but Sydney Stern, author of “The Brothers Mankiewicz: Hope, Heartbreak and Hollywood Classics” has long been familiar with his career.

Released in the fall of 2019 by the University Press of Mississippi, the 480-page book got a big bounce from the film. Although not affiliated with the flick, Stern said she has had very good relations with representatives from the movie and interviewed its director David Fincher for an upcoming article.

“Mank” viewers understand that Gary Oldham’s portrayal of Herman Mankiewicz requires close attention. His witticisms almost come across as asides, except for the fact that practically everything he says carries an added punch. Although Stern was not affiliated with the film, she has studied the pair and their work for years. The elder Herman, who died in 1953, and the more prolific Joseph, who died in 1993, wrote, produced and directed more than 150 films. The four-time Oscar-winning younger brother earned one “Best Picture” for directing “All About Eve.”

From Stern’s point of view, they were both “really brilliant guys,” with the more successful Joe being “the one who applied himself. Herman was the much more self-destructive person. And it was just a tragic waste in many ways of his intellect and what he could have done, had he not been so self-destructive,” Stern said.

”Even though I wrote a biography about them, which is basically turning people inside out, my first reaction was, ‘Oh my god, they’re going to be up on the screen. It’s such an invasion of their privacy,’ [laughs] even though they are long dead,” Stern said. “When I saw it, I thought it captured Herman’s endearing qualities as well as his repellent qualities. If the Gary Oldman character is a bit more of a tragic hero than Herman was, that’s OK. It’s the movies. I think they would have liked it.”

Before his death at 55 due to uremic poisoning, Herman Mankiewicz battled with alcoholism. He tried to help himself, he dried out a few times and friends tried to help him, Stern said. “His wife’s efforts included watering down any hidden bottles of alcohol that he had stashed away. Mankiewicz also was a ruinous gambler. That was almost worse because he was always in debt.

”He had planned to stay in Hollywood only long enough to pay off a debt and then planned to return to his assistant theater editor post at The New York Times working for George S. Kaufman. The pair were collaborating on a play. Herman was also collaborating with Mark Connolly. Also, he was the first theater critic at The New Yorker,” Stern said. “This was his life and the life he loved. But Hollywood money was so good that he wound up staying. Also, The New Yorker founder [Harold Ross] fired him while he was out in Hollywood for a few months because he was such an adversarial employee. He got himself fired all over town in the next 10, 15 years in Hollywood. He spent the rest of his life out there and died there even though that was not the life he wanted.”

Very beloved and smart, Herman Mankiewicz was always saying such “witty, interesting, succinct and economical things” that people often wrote down what he said and wrote about them, Stern said. The significantly more successful Joe regretted for most of his life not having done more serious work such as novels or plays. “It was much later in life that he made peace with the fact that he reached more people with the movies that he wrote and directed,” Stern said.

The very sociable and magnetic Mankiewiczes were great raconteurs who were very much in demand, according to Stern. “So smart that they often thought they were the smartest guys in the room, and consequently had high expectations of themselves,” the brothers were disappointed for most of their lives in what they achieved and failed to achieve, Stern said.

Herman Mankiewicz’s interest in the make believe was evident in his undergraduate days at Columbia University in the Teens, where he wrote the varsity play that featured Larry Hart and Oscar Hammerstein.

After graduating in 1917, three years later he wed Sara Aaronson and they sailed for Germany. Mankiewicz had pretended that he had a job and upon arrival he had to take a series of odd jobs. “It was funny-sad and of course they [Germany] were going through all these spirals of inflation,” Stern said. 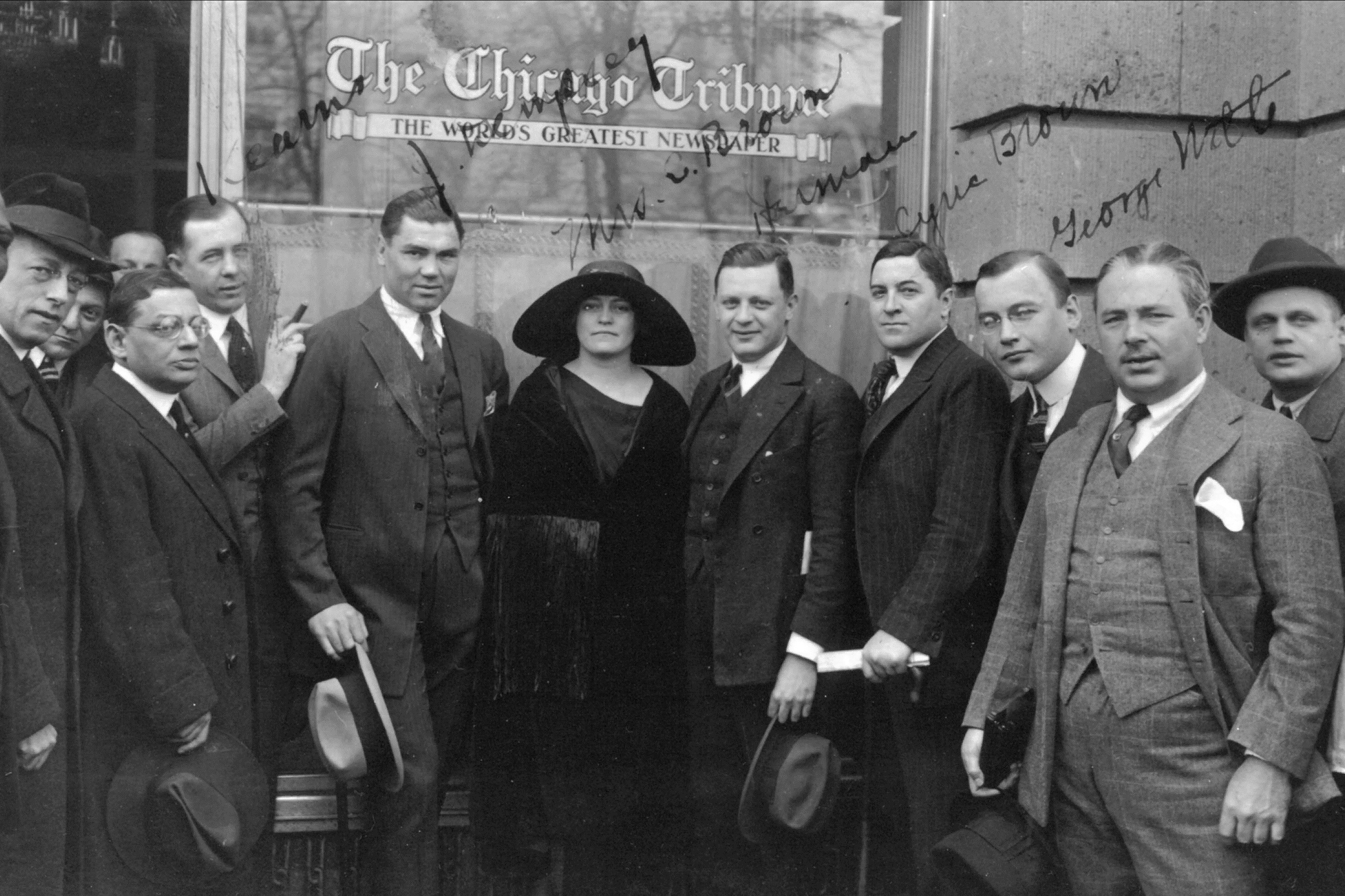 As a regular at Hotel Adlon, a popular hangout for journalists, Mankiewicz befriended many of them. He sent dispatches to The New York Times and established a Berlin theater column, which he  parlayed into something more. The Chicago Tribune reporter Sigrid Schultz and the Berlin bureau chief George Seldes felt sorry for him (and his wife), and helped get him work at Women’s Wear Daily’s bureau in Berlin. Earning $15 a week, Mankiewicz focused on economic and business stories in January 1921.

Having been in the Army during World War I, he landed a few days before the Armistice but did not fight, Stern said. “He experienced war-torn Europe and was there. He wrote these very prescient letters about how these terrible terms [of the Armistice between the Allies and Germany] were going to have terrible consequences, which they did.”

Later in 1933, as Hitler was gaining power, Mankiewicz wrote a screenplay, “Mad Dog of Power,” trying to warn people, but the studios wouldn’t touch it, according to the author. “That grows out of his closeup encounter with war, even though he didn’t fight in it. He was there, and it’s about his experience and the aftermath. It wasn’t Women’s Wear Daily specific, but it was kind of the gestalt of it.”

Unlike the bureau chief Bertram Perkins, Mankiewicz spoke German and ended up doing a lot of reporting. His work wound up being published without a byline or under his boss’ byline, Stern said. The job also came with a press pass, “which was of great interest for a history and political person like him,” Stern said. Readers of her book will find images of him with fighter Jack Dempsey, and another at the German Chancellor’s garden party in 1921. While in Europe, Mankiewicz also handled some publicity for Dempsey.

From her perspective, Fincher did a nice job of capturing Herman Mankiewicz’s complexity, although he did not write “Citizen Kane” drunk. She said, “There’s a lot of poetic license in the movie. There’s also a lot of truth.”

“Herman was a newspaper man. He loved to write newspaper movies. He started to write a play about [William Randolph] Hearst while in New York.” After returning from Germany, he stayed in New York from 1922 through 1926. Hearst fascinated the screenwriter because “he went for this young idealist leftist populist to a right wing yellow journalist. It was the politics of Hearst that  really interested Herman,” Stern said.

Out in Hollywood, Herman Mankiewicz attended Hearst’s parties and was riveted by how the titan was hooked into the world internationally and politically, as evidenced by the senators, presidents, international leaders and other well-connected guests who attended his parties, Stern said. “Hearst liked Herman for his interest and intelligence about the kinds of issues that he was dealing with all the time, and often had him sitting by him. That part was accurate. It just happened that Herman was an alcoholic and Marion Davies was too. By the late Thirties, Herman was no longer welcome at San Simeon. But Hearst liked him for a long time and admired his intelligence and wit.”

Stern said, “Hearst was a giant. Herman was an important guy in Hollywood, but he was a little flea compared to Hearst’s power. Wealthy powerful people like to have interesting people around them, entertaining them. Did he mouth off to Hearst the way he did in the movie? I doubt it. It’s possible because he got himself fired all over town mouthing off to bosses.”

The original “Citizen Kane” screenplay that he wrote for Orson Welles had the Marion Davies-inspired plot, but it was very political, addressing the Cuban War, according to Stern. “It’s in the movie but you slick by it faster, because it got flushed out and changed the nature somewhat. But it’s a political movie in many ways. That comes out of Herman, because he was a very political and historical person. A lot of family members said that he should have been a pundit.”

While “Mank” has sparked more interest in Herman Mankiewicz than his accomplished brother, whose credits include “The Philadelphia Story,” “Guys and Dolls,” “Cleopatra” and “The Barefoot Contessa” among other films, Stern thinks the two brothers’ lives and careers would be prime for a miniseries. Asked about her immediate plans, Stern plans to write another book about a Hollywood person she declined to name. Having not written about Hollywood before “The Brothers Mankiewicz,” Stern said, “It was a huge learning curve to get all that Hollywood history and to understand the business and the background to all the movies. After years of acquiring that knowledge and a wall full of Hollywood books, I want to use it again.”

Related posts:
World News:
Thousands evacuated at Frankfurt Airport as 'arrests made over rogue suitcase’
Parler CEO John Matze and family go into hiding after death threats
Army to send hundreds of soldiers to NHS hospitals to help intensive care units overwhelmed with Covid
Woman allegedly steals mail truck, crashes into more than 10 cars in NYC
Recent News:
This website uses cookies to improve your user experience and to provide you with advertisements that are relevant to your interests. By continuing to browse the site you are agreeing to our use of cookies.Ok