On past deployments Army National Guard Spc. Michael Stockwell surveilled a desolate section of the U.S.-Mexico border during a migrant surge, and guarded a ring of checkpoints and fences around New Mexico’s state Capitol after the January 2021 insurrection in Washington.

On his current mission, Stockwell helps students with assignments as a substitute science teacher at Alamogordo High School.

Dozens of National Guard Army and Air Force troops in New Mexico have been stepping in for an emergency unlike others they have responded to before: the shortage of teachers and school staff members that has tested the ability of schools nationwide to continue operating during the coronavirus pandemic.

While many other states and school districts issued pleas for substitute teachers amid omicron-driven surges in infections, New Mexico has been alone in calling out its National Guard members. In 36 of the state’s 89 school districts, guard members have traded in mission briefs for lesson plans to work for school systems. 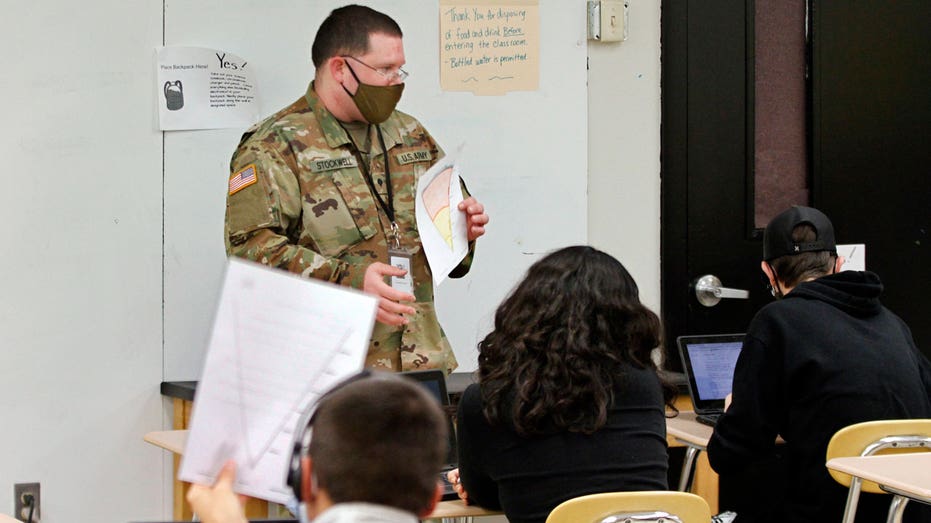 When Stockwell first walked into the freshman science class, wearing camouflage fatigues and combat boots, some students thought he was just visiting, like a recruiter. Then he took a seat in the teacher's chair.

"When he started taking attendance, I was like, ‘whoa,’" said Lilli Terrazas, 15, of Alamogordo. "I was kind of nervous because, like, you know — a man in a uniform. But it was cool. He helped me."

Roughly 80 service members have volunteered to work in schools. The troops have gone through background checks and taken brief courses required for substitute teachers. As substitutes, they don't have to learn much about curriculum, but they need to be attentive to students.

Stockwell has been filling in since late January when his students' teacher moved to an administrative role in another school. One recent day, he shuffled through the rows of school desks, kneeling to meet students eye-to-eye as he helped them with assignments calculating the depth of the earth’s crust, and other layers of the planet.

Gov. Michelle Lujan Grisham, a Democrat, called out the guard to help with the acute shortages in a state that like several others has struggled to find enough educators. At least 100 schools had reported closing down for at least one day this school year.

New Mexico saw a surge of teacher retirements last fall, and there are currently around 1,000 open teaching positions in a state with about 20,000 teachers. Grisham stressed the guard deployment is a temporary measure and state officials are working to bolster the teaching force and school staff through increased pay and other strategies.

At Alamogordo High School, the teacher shortage peaked on Jan. 13, when 30 teachers, about a third of the teaching staff, were out due to illness, professional training, or family emergencies.

"Everybody was enjoying their holiday and things like that, and then they came back and were sick," said Raeh Burns, one of two Alamogordo High School secretaries tasked with filling teaching slots each morning. "I know I’m going to have Mr. Stockwell every morning and that he’s OK to go where I need him to go." 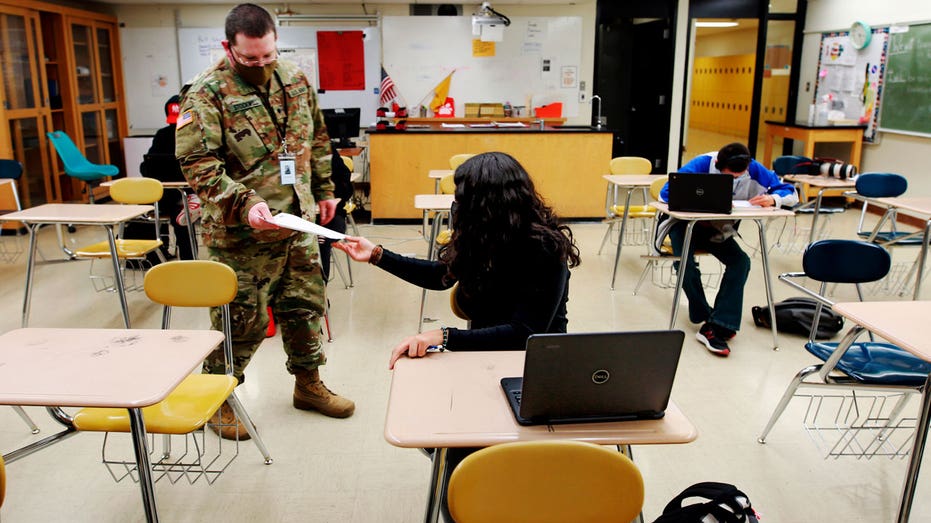 THE MOST, LEAST EDUCATED US STATES IN 2022: REPORT

Ultimately, Santa Fe and Albuquerque, two of the largest urban school districts, did not receive any soldiers despite their requests as the deployments have prioritized smaller and more rural school districts.

Elsewhere, when given the choice, some soldiers have opted for military fatigues over civilian clothes to command respect in the classroom, particularly if they’re not much older than their students.

"I think I look like an 18-year-old out of uniform," said Cassandra Sierra, 22, of Roswell, N.M., who has served as a substitute teacher in a high school in Hobbs.

Sierra already works with kids in her day job as a student coordinator at a military boarding school in Roswell, which has given her an edge as a substitute.

"Kids just need patience," she said. "I think I just have a lot of patience."

At a middle school on Alamogordo's Holloman Air Force Base, students are used to seeing people in uniform, but not in classrooms.

"I was like, ‘Oh, we have somebody in the uniform that’s going to teach us. That’s kinda awkward.’ It was weird," said Andrew George, 12, of his computer classes led by a woman trained in combat and with experience leading a platoon overseas. "Once she introduced herself I was like ‘Oh yeah, this is going to be fun."

The substitute, Lt. Amanda Zollo, works in the 911 dispatch center in Albuquerque when she’s not training or serving with the guard. She kept students on task during a lesson about cybersecurity, as they created and then attempted to break each other’s passwords.

She was subbing for a teacher who was having trouble finding childcare. The principal, Whitney Anderson, said that having Zollo's services meant that for the first time that week she didn't have to take over a classroom herself.

Zollo doesn’t talk about her work as an infantry officer with her students, which, after a nervous laugh, she describes as "engaging with and destroying the enemies of the U.S. in close-quarter combat."