Chief Health Officer Brett Sutton says he has been honest in his evidence to the official inquiry into Victoria’s ill-fated hotel quarantine program about his knowledge of the use of private security firms to guard returned travellers.

But the man leading the state’s health response to the COVID-19 pandemic conceded on Saturday that he had seen an email in late March that mentioned private security, but that the detail had “not registered” with him. 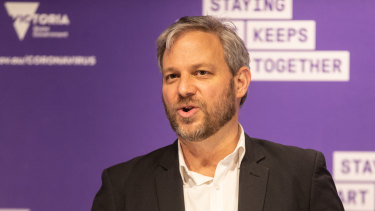 Chief Health Officer Brett Sutton says he has been honest in what he told the inquiry.Credit:Simon Schluter

Professor Sutton told the inquiry that he was in the dark on the use of private security – which has become central to the inquiry’s investigations – until COVID-19 outbreaks began to emerge in May among workers at the isolation hotels.

Professor Sutton said on Saturday that he had seen and responded to the email but that its reference to private security had not registered with him before he passed it on and that he had played no part in a decision by the Health Department to withhold the document from the inquiry.

The inquiry, which was due to have wrapped up its public hearings ahead of its November 6 reporting date, has convened an "extraordinary sitting" for Tuesday although it is unclear if it intends to recall witnesses.

Premier Daniel Andrews told his regular COVID-19 media briefing on Saturday that he strongly supported Professor Sutton but the state opposition said it believes the Chief Health Officer knew about private security much earlier than he has said, with the Victorian Liberals demanding that the inquiry reopen for full hearings.

Professor Sutton said on Saturday that he stood by the evidence he had given.

“My statement to the inquiry was true, I provided honestly, I was under oath, I take those obligations extremely seriously,” the Chief Health Officer said.

The health official said he had handed all his emails, including the messages in question, to the team from the Department of Health and Human Services tasked with complying with the inquiry’s request for documents and that he did not know why they were not supplied to Justice Jennifer Coate’s inquiry.

“I made all of my emails, archives and otherwise, right from the start of this pandemic available for that team to go through,” Professor Sutton said.

“All of my emails remain absolutely available for any further requests.”

Professor Sutton said the detail in the email, from the Public Health Team to the federal government, about private security had failed to register with him.

“I’ve responded to an email that I can see was a response to the Commonwealth with a number of questions," he said.

“I saw that they were responding to the Commonwealth and thanked them for the response they had given but I clearly did not register that anything was being said about private security, otherwise I would have gone to the inquiry and said I was aware of it.”

Shadow Attorney-General Ed O’Donohue said the inquiry should begin its work again and that there could be many other important pieces of evidence that had been withheld.

“The revelation that Brett Sutton had knowledge of security guards being deployed at hotel quarantine are alarming and it contradicts the evidence he gave to the inquiry both in written form and orally,” he said.

“How many documents are out there in other departments that are being hidden, that haven’t been produced, that shed light on the facts?