Superannuation funds could pour members money into risky assets if new rules are introduced for the sector to meet proposed investment performance tests, with lobbyists and research firms warning the rules could have unintended consequences for retirement accounts.

The McKell Institute executive director of superannuation James Pawluk, speaking at the Senate Economics Legislation Committee public hearing on Thursday, warned the proposed Your Future Your Super legislation could encourage the $3 trillion sector to invest in increasingly risky assets to ensure they don’t fall under proposed targets. 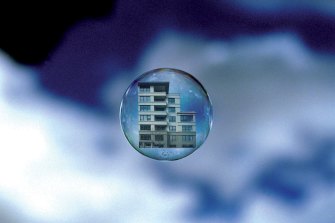 Super funds might pile into asset bubbles to try to outperform new benchmark tests, the McKell Institute is warning.Credit:Rodolfo Pazos

The legislation includes new performance tests which measure investment outcomes. If a fund does not meet these targets for a year, it will be forced to inform members about their poor returns and if the underperformance continues for a second consecutive year the fund will be blocked from adding new members.

Mr Pawluk said this could lead to two outcomes, either more risky investment behaviour to meet short-term targets or “index hugging” with overly conservative investments rather than attempting to over-perform.

“Much of the analysis in this policy space seems to occur in the confines of well-functioning financial markets but there are adverse situations we need to specifically consider. One of those is asset bubbles,” he told the Committee.

“[The benchmark] will make it less viable for funds to adopt a strategy of steering clear of an asset bubble as it’s forming unless they are convinced it will burst or dissipate before the current performance period ends. Else they risk falling foul of the benchmark and triggering an exodus of members,” he said.

“The only rational strategies would be either to pile in on the bubble aiming to pull out just before it bursts or hug the index through good and bad.”

He said this would have the effect of encouraging super funds to behave similarly to retail investors “taking on their animal spirits rather than acting as sophisticated long-term investors”.

The new test, which is expected to kick in from July 1 if the legislation is passed, is supported by the Australian Prudential Regulation Authority which expects clear benchmarks to help tackle underperformance by providing consequences for the sector.

Asset management firm Mercer, who appeared at the public hearing on Thursday, recommended the benchmark indices be expanded with additional measurements better representing the asset used by some funds. It also recommended the performance tests include an adjustment for risk or volatility on the basis that lower returns might be offset by lower risk for members.

The Australian Institute of Superannuation Trustees has also recommended the benchmarks be risk-adjusted and better reflect the range of assets typically invested in by funds.

AIST warned in its submission there would be the risk of funds tracking the index, which would reduce the risk of underperforming the benchmark but also limit the chance of doing much better than the index.

“Providers of underperforming funds may also be incentivised to engage in short-termism to improve short-term performance in order to reopen to new members.”