The 2022 Super Bowl Halftime Show was definitely one for the books! The entertainment was top-notch as Dr. Dre, Eminem and more took over SoFi Stadium for an incredible show.

The Super Bowl Halftime Show is just as important as the game, and in 2022, there was tons of entertainment to be had. There were five headliners for the Super Bowl LVI Halftime Show — Dr. Dre, Eminem, Mary J. Blige, Snoop Dogg and Kendrick Lamar. Each artist had their moment to shine during the set, and they also all came together amidst the performance. 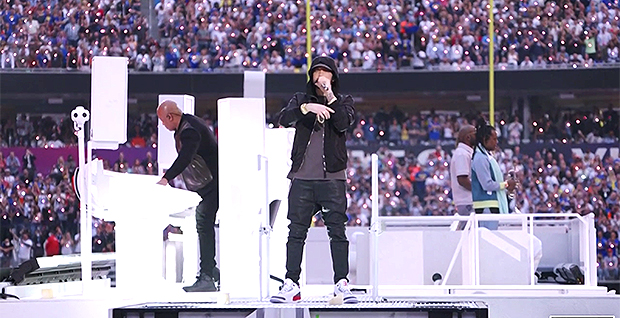 The show started with Snoop and Dr. Dre centerstage singing “D O Double G.” Snoop wore blue and yellow to represent the Rams. The stage was set up as a massive house across the field, with Snoop walking into a room amidst guitar players and a drummer who played the background music for his track. Snoop and Dre then went on top of the house to duet on the chorus.

As the rappers went off, there were dancers below them on the field, dancing to the beat of the hit song. Next, 50 Cent came in as a surprise performer. He was descended down from the ceiling as he began rapping “In Da Club.” Next, Mary was front and center to sing “Family Affair” and “No More Drama”. She wore a stunning sparkly bodysuit and thigh-high boots that matched the outfit. Her hair was styled in curls and parted down the middle as she belted out her hits.

Kendrick was front and center next, performing in the middle of the field for his part of the performance. He wore a black suit with gold brooches and his hair in braids. Finally, Eminem appeared out of an exploding set. He kicked things off with “Lose Yourself,” wearing jeans, a t-shirt and a gold chain. The show continued with Dre taking his seat by the piano and Snoop coming back to the center of the set to rap. At the end, the performers all came together for a group set. 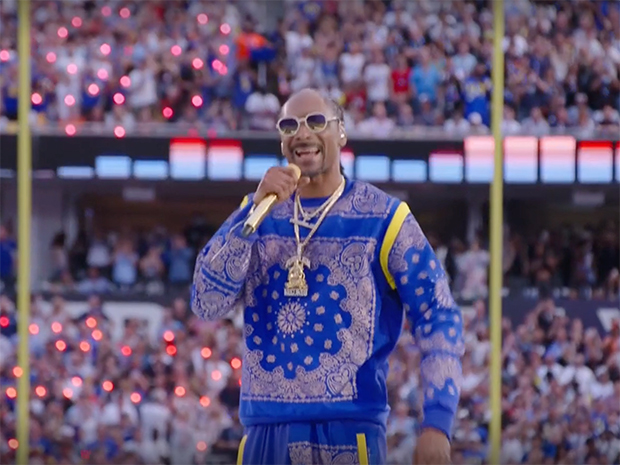 Earlier in the night, Mickey Guyton was centerfield to sing the National Anthem, while Jhene Aiko belted a stunning rendition of America the Beautiful. Of course, there was also a football game on-hand. The Los Angeles Rams and Cincinnati Bengals played in the 2022 Super Bowl, which aired on NBC. Considering the game took place in Los Angeles, there were also tons of celebrities in attendance to watch the game and party for the big night. With all these athletes, entertainers and more in the building, it was certainly a star-studded affair — and everyone who was there got quite a show at Halftime!