"I'm beginning to recognise the fact that nothing is true. Nothing. It's all down to perception," Barry Gibb says as he stands overlooking the glistening harbour from his Miami estate. George Orwell saw this coming of course. For pop stars taking stock in their twilight years though, it must be chilling.

The poignant scene opens the new Bee Gees documentary, How Can You Mend A Broken Heart, a two-hour montage of pain and (mostly) triumph which is part of every music legend's retirement package. One more brick in an unassailable monument against the shifting sands of popular culture.

And wait now, what's this? A new Barry Gibb album? Timely. Greenfields: The Bee Gees Songbook (Vol.1) is a duets collection: a dozen country superstars joining the last surviving Gibb in an emotional backtrack though some of the brothers' greatest songs. 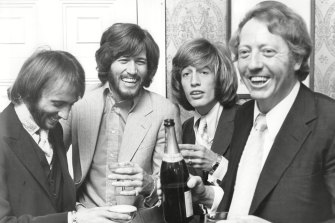 Frrom left, Maurice, Barry and Robin Gibb with their manager Robert Stigwood in a still from Bee Gees: How Can You Mend a Broken Heart?Credit:ANL/Shutterstock

Run To Me with Brandi Carlisle is heaven. Too Much Heaven with Alison Krauss is, well, moreso. Even Keith Urban can't render I’ve Just Got To Get A Message To You anything less than utterly magnificent.

Lonely Days (with Little Big Town), Words (with Dolly Parton) and How Can You Mend A Broken Heart (with Sheryl Crow) are pure divinity to these ears. Legacy sealed. Again. Barry and his sadly departed brothers Robin and Maurice rule.

That said, I have friends who perceive How Deep Is Your Love as stomach-turning schmaltz. Night Fever as disco-castrato garbage. I Started A Joke insipid melodrama. If they watched Frank Marshall's documentary long enough to see Ed Sheeran sing Massachusetts, they'd perceive one gormless soft-pop hack simpering over another.

Nothing is true. Nothing.

Sheeran's time may come, if his luck holds, to rejuvenate his old hits with singers not yet born. Fates willing, other artists summoned to bolster the Bee Gees' cred in this new album and documentary — Noel Gallagher, Justin Timberlake, Chris Martin, Jason Isbell, Gillian Welch — might also prosper long enough to have their claims to history validated by the flavours of months to come. 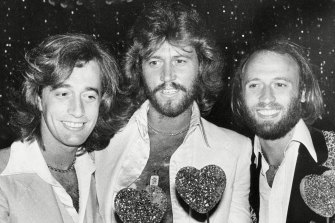 The Bee Gees, from left, Robin, Barry and Maurice Gibb, attend a party following the Hollywood premiere of Sgt. Pepper’s Lonely Hearts Club Band in a still from the documentary The Bee Gees: How Can You Mend a Broken Heart?Credit:Lennox Mclendon/AP/Shutterstock

This is survival in the ongoing, apparently escalating sandstorm of pop currency. Ray Davies of the Kinks made one of these self-retrospective duet albums a few years ago. Sting has one in the works. The "Unplugged", acoustic/ roots-styled remake or curated tribute album is more common. The jukebox musical — Mamma Mia, We Will Rock You, Jersey Boys, American Idiot; and the smash pop biopic — I Walk The Line, Bohemian Rhapsody, Rocket Man — are the new elixir of youth for back catalogues seeking a boost through the trending crowd.

Sometimes, these rehash jobs are great. Their audiences are the best proof of their right to exist and flourish. But they're never, ever as good as the original records, forged in the heat of whatever moment gave them life to lodge in the hearts of fans who grew up on the same page. This how pop songs work.

So pity Barry Gibb, one of the all-time greatest and most successful craftsmen of his field, fretting through lonely days in his Miami home. The Bee Gees knew the cruel transience of perception better than most: cancelled at least twice in their brilliant, 50-year career, long before that term came to haunt our culture like a lynch mob lying in wait for all eternity.

"I just hope and pray that the music lasts," he says in the film, seemingly close to tears, as if the existence of 220 million records — Saturday Night Fever alone sold 40 — were not already enough to justify his and his brothers' lives on Earth.

In that moment, we see the curse that pop artists buy into when they learn to equate their worth with perceptions. It's a story as old and tragic as Elvis Presley. It's the one commencing now, on some fake and gaudy TV talent show. It's the only story these documentaries ever tell.

Ed Sheeran? Not so much. That's my truth, and I'm sticking to it.

How Can You Mend A Broken Heart is at Palace Cinemas and streaming now. Greenfields: The Bee Gees Songbook (Vol.1) is out via Capitol.