Sky customers across the South of England have reported being unable to access the internet as millions of people work from home amid the coronavirus lockdown.

Reports of problems with the broadband service started to come in just after 06:00 BST with the most reported locations in Weston-super-mare, St Austell and London.

According to the website down detector there have been nearly 2,000 reports of problems with Sky internet connections since 06:00.

The first reported issues came from Cornwall with the Sky Help team tweeting they were ‘investigating the issue’ but it seems to have expanded since then.

A Sky spokesperson said they were aware of the problem, which was primarily impacting customers in Cornwall, and that they were working hard to fix it. 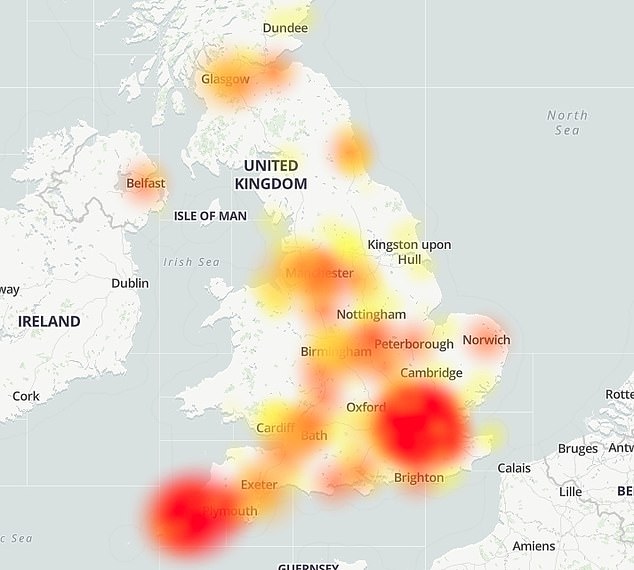 Users have taken to Twitter to say they are struggling to work from home as a result of the broadband issues.

James Melville tweeted: ‘Sky broadband is down. This means I can only work via my 4G on my phone. @SkyUK – when will this be resolved?’

George Hawke said: ‘Need to work from home and need internet. Can we have an update please on estimated time of fix?’

Anna Sidney said: ‘Sky says there is a problem at the exchange. Don’t bother calling them it’s a 2 hour wait unless your over 70 or a key worker. Don’t worry if you’re just trying to work from home while staying home safely’.

In a tweet the Sky Help Team said: ”We’re aware that some customers in the area are reporting an amber internet light on their router. Our support teams are currently investigating this issue.’

The company say they are aware of how important broadband is at the moment and so are working hard to restore services to affected customers. 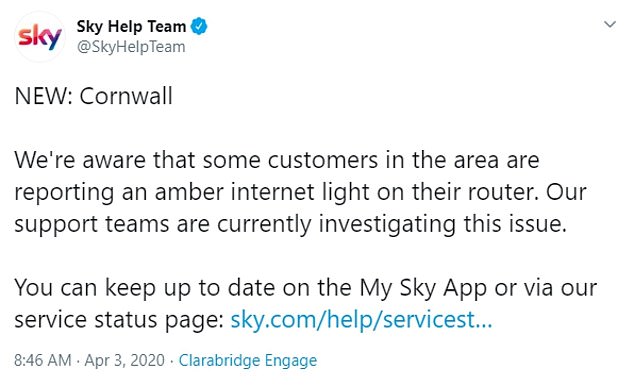 Sally Mitchell said on Twitter: ‘Useful for attempting to work from home. c’mon @SkyHelpTeam get it sorted so I don’t have to resort to housework today.’

Sky said in its tweet that users should check its service status page for an update on whether there are issues and when it will be fixed.

Unfortunately, this doesn’t seem to be showing accurate information with many having problems but Sky Status reporting ‘no known issues in your area’.

Me tweeted: ‘Right hand, left hand need to start talking cos this is getting beyond a joke now, proper update and timescale to resolve the issue is required, I know this is a difficult time but transparency is required.’

RRW Shopfitters tweeted to say ‘Sky status is saying everything is OK. But its not. Solid amber light for internet connect.’

Down Detector saw the majority of issues reported from about 06:00 this morning, with most coming in after 08:00 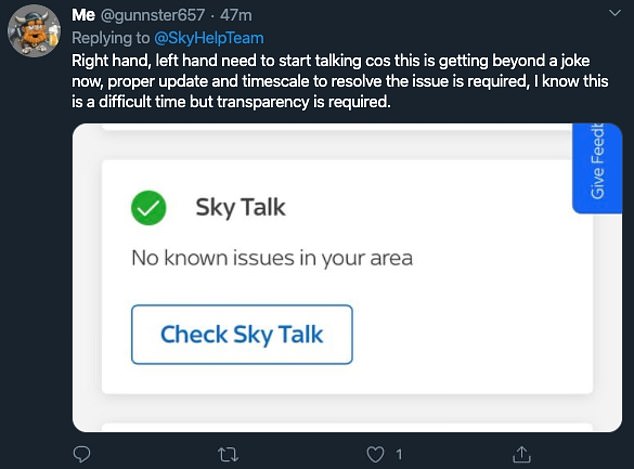 Robert Huges said: ‘Can you please give people an estimate on how long it will take to get internet back as it is now technically the working day and has been for a couple of hours for some people’

The majority of the original problems appear to be from users in Cornwall including Miles Carden who says it is ‘out in St Mawes Cornwall’ and asking for a timetable so he ‘can plan the day’.

Robert Huges said: ‘Can you please give people an estimate on how long it will take to get internet back as it is now technically the working day and has been for a couple of hours for some people.

‘I am self isolating and there will be other disabled and vulnerable people that need this service ASAP.’

Issues around broadband and internet connectivity are heightened at the moment as millions of people are either working from home, self isolating and homeschooling.

Broadband use has spiked in the past few weeks as people spend more time in their house during the day – with the main demand coming from video streaming, video chat services like Zoom and gaming.