An unconventional exercise class with a controversial name disappeared in a storm of outrage earlier this year. But what does its short life tell us about the fitness world it leaves behind? 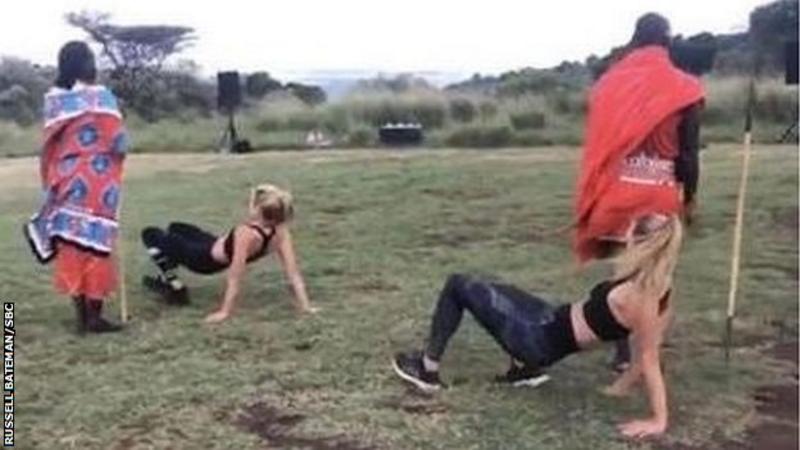 More than half the British population barely say a word to their neighbours – in a 2018 poll, 68% described them as strangers. Birthday cards? Two thirds of us couldn’t guess the ages of those living next door.

And yet online, we are apparently more connected than ever.

In the world of fitness, brands are increasingly employing digital tactics to attract new recruits. And the classes that succeed in bringing strangers closer together seem to be flourishing the most. They might even pose the biggest threat to Britain’s more traditionally popular sports.

Among this developing field, one class emerged as more extreme than the others – certainly in name. The Skinny Bitch Collective. Controversial, highly selective, it was an exercise class reserved for the celebrity elite.

Russell Bateman was behind it. A former writer turned Mayfair personal trainer, he claimed the name of the female-only fitness group, which was established in 2013, was meant as a term of endearment.

Based in London, it quickly became known as the most exclusive exercise class on the planet. Singer Ellie Goulding signed up, so did TV personality Millie Mackintosh and a plethora of Victoria’s Secret supermodels.

It was said that Bateman specifically targeted the modelling industry and young, aspiring actresses by promising to help them get in shape before events and shows.

Jenny, a former SBC member, emphasises how difficult it was to get in.

“You couldn’t just turn up,” she says. “I’m pretty sure they looked at your Instagram following, which I definitely didn’t have.

“I remember having to email and say exactly why I wanted to go to SBC. It took weeks for me to actually get into a class.

“People wanted to show others what they were doing as it was so exclusive and you were one of the ones who made it in. Even though I didn’t love the workout I still posted about it – it was the ‘cool’ thing to do. Thinking about this now makes me cringe.”

You’d be forgiven for thinking that a class this exclusive would take place somewhere off-limits to mere mortals. The reality couldn’t have been more different.

“You could say I was a little surprised when I realised it was inside a Fitness First,” Jenny adds. “We were shuffled straight through the door and into a private room.”

Once in dimly lit secrecy, the 30 or so women present would stand in a circle and perform a number of activity ‘sets’ to the hypnotic beat of electronic music, but with a less regimented feeling to that of your typical high intensity interval training (HIIT) class.

Described as ‘animalistic’ in online comments, the pace was quick. With no equipment besides gravity, your bodyweight, and that of your class-mates, it left participants wondering ‘what’s coming next?’

Just as the name was extreme, so was the content. A former editor of The Cut also attended a class and wrote: “My partner was a girl from Italy who punched me in the stomach on Bateman’s command. As we took turns treating each other’s abs like punching bags, she cheered me on: ‘Don’t worry, you can do it harder!'”

Keen not to ‘dilute the brand’, Bateman led every session himself to ensure SBC retained its ‘unique style’. It was said one session would set you back £42, plus an annual £300 membership fee.

But then – in March this year – SBC imploded, disappearing almost as quickly as it had shot to fame. 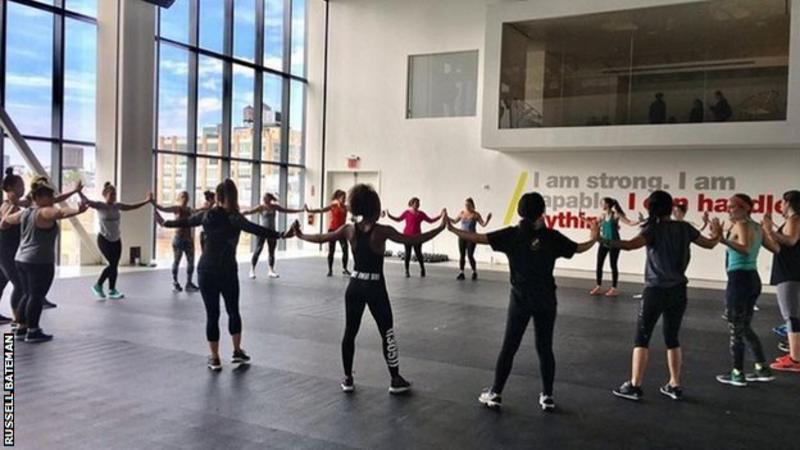 Its downfall was sparked by a video of an SBC retreat in Kenya posted online. In it, young, white women were performing Bateman’s cave-girl-like exercise programme while Maasai tribespeople stood on in watch.

The fashion industry’s whistle-blowing Instagram account, Diet Prada, re-uploaded some of the videos, and fiercely criticised SBC for its “colonial mindset”.

It accused the group of using “local Maasai people as literal props in their fitness routines”, adding: “Screenshots appear to show the girls writhing around them like an obstacle course.”

Batemen quickly apologised, claiming the idea had been designed to promote “cross-cultural exchange”. He said the SBC had been “required to be accompanied by the tribe at all times” because of the land the retreat was taking place on.

More than 10,000 comments on Diet Prada’s post suggested his words had fallen on deaf ears. The public had seemingly made their mind up. SBC was dead.

Now all that remains of Bateman’s brainchild is a handful of online articles. His website reads ‘currently down for maintenance’ and any trace on social media has disappeared into the ether.

Over email correspondence, he says he “wanted to make people feel better and experience highs and a unique style of workout”.

He adds: “There was a sense of family and friendship. People have become best friends after training together at SBC and that’s a great feeling.”

Bateman has also described SBC as the wake-up call the fitness industry needed. It seems like a controversial thing to say – but you could certainly argue that its rise reflects a trend that appears to be gaining momentum. A trend in contrast to the stuffy classes of the past that featured little interaction or engagement among members.

Take Australian-born F45. It made its way to Britain in 2015, starting out with just two London studios. There are now 35 in the UK, with a further 50 set to open this year.

The concept is simple: Activity is ‘functional’, hence the ‘F’. It features movement and exercises that prepare the body for real life (think squatting and pulling). You make your way around the 20 or so stations, following the instructions on the screens in front of you. Each class lasts precisely 45 minutes and is different to the last.

It has had a positive reception. Online blog Whatever your Dose wrote: “Everyone is in it together, helping each other out, chatting away about their weekends. It’s so much more than just a training session, it’s a community.”

Many other online responses appear to agree – that motivation is boosted by support from fellow attendees.

“The immediate impact of the cappuccino withdrawal amazed me, but the WhatsApp group I’d been added to told me I wasn’t alone,” blog user Refinery29 wrote.

And those wanting to see ‘results’ even faster could opt to take on the F45 Challenge; as many sessions as you can fit into eight weeks, with a diet plan and regular measurement-taking to boot.

Lucy, a former attendee, is less positive about the regime – especially the diet plan. She says: “I mean, it works – I lost weight and got into shape. I don’t know whether it’s healthy though – it felt a bit like malnourishment.

“Then after the eight weeks that’s it really. You go it alone. There wasn’t much advice on how to reintroduce all these things you’d banished for the previous two months.”

But F45 is far from the most popular among this new wave. That would be CrossFit: ‘Constantly varied, functional movements, executed at high intensity.’

CrossFit has taken the health and fitness industry by storm since it was created in the early 2000s. There are now more than 17,000 affiliate gyms (‘boxes’) worldwide – maybe more once you’ve finished reading this – and an annual CrossFit Open contest that saw 358,646 registrations in 2018.

Enter and you can begin to see – and hear – clues to its power. CrossFit has its own unique vocabulary; a language reserved only for those in the know. WODs tell you your workout of that particular day. AMRAP? Get ready to work to exhaustion in ‘as many rounds as possible’. Chipper no longer refers to a state of mind but rather an intense combination of long repetitions which you ‘chip’ away at. ‘The workout from hell’ it’s been likened to online. It’s been described as both punishing and euphoric online – sometimes in the same sentence.

And where CrossFit prides itself on the ability to modify WODs depending on your fitness level, the exercise elite will only be looking to ‘Rx’ them. This means ‘as prescribed’, meaning that you completed the workout with no modifications to movements or weight.

Classes seem to possess a form of magnetism. Some have even gone so far as to describe CrossFit as a cult. When questioned about this by American news channel CNBC, CrossFit CEO Greg Glassman said: “Call it whatever you want. We’re making a difference — a profound difference.”

Fitness activities attracted 13.4 million Britons in 2018, according to the Active Lives survey – more than double the number of those going for a jog and only second in popularity to walking.

The survey showed a five-figure growth for gym-goers on the previous year, running numbers remained largely the same, while team sports and cycling participation had a slight decline.

And 2018 stats published by the National Governing Body for Group Exercise show a one million increase of weekly exercise class participants compared with 2016.

While Bateman is clear we won’t be seeing an SBC revival anytime soon, he believes it is still influencing the exercise scene.

“I think the landscape is way more community driven than it ever has been, which is great,” he says.

Perhaps he is right. Maybe we are seeing fitness fads evolving into something else: fitness families?