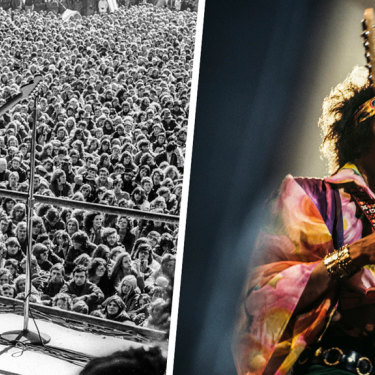 From left: James Marshall Hendrix plays his last show on the Isle of Fehmarn, Germany, on September 6, 1970, just days before his death, and in London in February 1969.Credit:Getty Images

You don't need to call forensics to understand Jimi Hendrix. But it's not a bad start. "This is gonna sound nerdy," chuckles Phil Bywater, a music lecturer at the Australian College of the Arts, when asked about the essence of the late rock maestro's legacy. "It's the dominant seventh sharp ninth chord."

Don't panic. Hendrix didn’t know music theory either. He didn't invent the fistful of rude notes that now commonly bears his name, he just showed us how to shake it. You know the one: Purple Haze shoves it in your face and wriggles. Foxy Lady spanks that nasty thing like she doesn't give a goddam what your mama says.

"That sound," the academic muses. "It combines his concept of harmony, his concept of timbre, his desire to shock … they're all connected in that chord."

This microcosm only hints at the universe of inspiration James Marshall Hendrix bequeathed when he left this planet at age of 27, on September 18, 1970. Psychedelic explorer, mystical philosopher, snappy dresser, ultimate cool and sexy dude and, for half a century now, winner of just about every 'Greatest Guitarist' poll ever published. 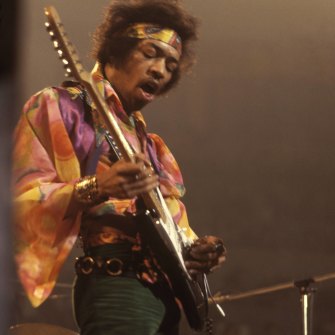 Darren Hart, aka Harts, is another prolific young multi-instrumentalist who draws more literally on Hendrix's look, sound and energy. Again, Hendrix didn’t invent playing the guitar behind his head, bent over backwards or on his knees, but when Harts brings his paisley prints, crushed velvet jackets and big hair to all that, the homage is hard to ignore.

"I remember when I was learning guitar as a teen, the feeling of joy finally nailing some of those iconic riffs and licks was so motivational," he says. "It’s also really rewarding to see some of my fans discovering his work for the first time."

It was the fans, he says, who suggested Harts Plays Hendrix, the tribute show that returns to the road next January (plague permitting). "I wanted to do it," he says, "to try to open up his music and shine a light on his legacy to a new or younger generation that may not have heard or be that familiar with who he was and what he meant."

And what was that, exactly? The word "freedom" features heavily in Hart's appreciation. The revolutionary way Hendrix used his instrument – more like a piece of electronic equipment than a loud acoustic guitar, as Brian Eno once observed – was an ongoing act of rebellion against its physical limitations and, by extension, the laws of the musical universe. 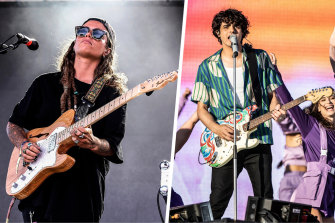 "The music I might hear, I can't get it on guitar," Hendrix said at the peak of his fame. "I'd like to get something together, like with Handel and Bach and Muddy Waters and flamenco … If I could get that sound, I'd be happy."

It might be glib to suggest that Sultana or Harts could dial up that exact combo in their virtual home studios in a heartbeat. But it is fair to say that the cross-genre mash-up aesthetics of hip-hop, meshed with the infinite possibilities of digital recording, have largely replaced the struggle for new sounds with the agony of unlimited choices.

He's almost like a Jedi, or a mystical figure. There's so much freedom and creativity and sense of exploration in his art.

"It's easy to get lost in technology," music producer Pat Marks agrees. As Pataphysics, he describes his influences as "probably 70 per cent hip-hop" but lately avant garde jazz and R&B. For him, Hendrix's legacy is "about tech being balanced and centred and connected to your art, on a personal, emotional and spiritual level".

Here's the nub of it, of course. After all the guitar pedals have been drooled over and packed away like grandad's precious pipe collection, it's the visionary dimension that keeps artists like Pataphysics returning to Hendrix recordings as portals to future possibility.

"That's definitely something that hip-hop and electronic music still takes from Hendrix," he says. "When I'm working with an artist and we talk about getting some Hendrix vibe, we're not necessarily talking about the guitar. We're talking about a mood, or an energy.

"He's almost like a Jedi, or a mystical figure. There's so much freedom and creativity and sense of exploration in his art, regardless of the genre, that is a huge inspiration for you to look at your own artistic practice and say, 'Why am I within this box? What can I do to go deeper?'" 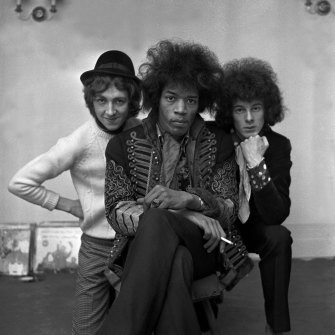 He's kind of joking about the Jedi thing. But Obi Wan Kenobi's famous last words spring to mind here: "If you strike me down, I'll become more powerful than you can imagine." Tash Sultana volunteers the macabre truth that Hendrix's early departure, so ripe with promise, is one key to what makes him so compelling.

"There'll always be a mystique about anybody who passes away early. There's a level of mystique about the pre-Internet era artists [anyway], because it's all hearsay and rumour …

"There's not really any mystique to artists anymore. It's just maximum exposure. I like the mystique. It's cool. You're always gonna have endless questions when someone hasn't given it all away. You're gonna keep generations inspired because no one knows the answers."

What would Jimi Hendrix do? The question does have the ring of eternal inspiration, even if the answer could be deflating when he was still with us. "He could have a very sloppy attitude on stage and it could turn into a shambles," recalls Stuart Penney, a Sheffield-born music writer who saw him perform four times back in the day, including his last UK appearance at the Isle of Wight two weeks before his death. 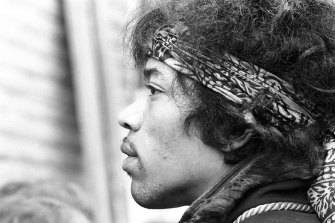 Jimi Hendrix photographed not long before his death in 1970.Credit:Michael Ochs Archives/Getty

These days writing an eyewitness blog about rock's golden age and players, Penney tells a slightly heartbreaking story from London's Saville Theatre, when he was close enough to see Hendrix's roadie substitute a cheap Fender Mustang just before he smashed his trademark Stratocaster. "He must have had a quiet week financially," he observes.

Hendrix's scraps of memoir record similar indignities. One Atlanta show in '68 "was a drag", he writes. "Who wants to sit in a plane eight days a week and come down and see peoples' faces saying, 'Are you going to burn your guitar tonight?' What’s that shit about?'"

That shit is showbiz and Hendrix tasted the very best and worst of it. In his four-year ascent as a musical force, it's hard to think of many aspects of the rock star cliché that he didn’t embrace and ultimately, of course, trip over. "But I don't remember ever being disappointed," Penney says. "He just looked fantastic."

'The frills, the velvet, the flares, the floral boho shirts … the fashion industry in general is constantly referencing him.'

Still does. Sydney stylist Monique Moynihan sees him in plenty of bands she works with, and tons more from afar. "Jaden Smith and Harry Styles are at the forefront of that eclectic and often flamboyant fashion style that Jimi Hendrix left behind, but with a Gen Z twist," she says. "The frills, the velvet, the flares, the floral boho shirts. Troye Sivan, Alex Cameron, Kirin J Callinan, although not directly referencing his style, have definitely been inspired by his more flamboyant looks. 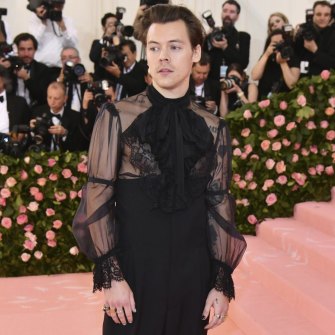 Harry Styles, laced up, at the Met Gala in 2019.Credit:Charles Sykes/AP

"The fashion industry in general is constantly referencing him," she adds. "The hussar military jacket that I think is his most iconic look is redone seasons and seasons again by both Saint Laurent and Balmain. And Gucci’s whole collection ever since Alessandro Michele took the reins is an ode to that Hendrix era of Bohemian rock."

So the chord rings on. Even if its precise harmonic structure might be mostly academic. "We are a fifth of the way through the 21st century but for me and the vast majority of my musician friends, we are deeply creatures of the 20th century," Collarts lecturer Phil Bywater says.

"For my generation, Hendrix is still core. But I can see that for the current generation of students that I'm teaching, there is a look, there's a certain celebrity attraction, but there's less direct connection to the music."

Then again, if 50 years of rock have taught us anything, it's that everything comes around again eventually. Bywater wants to get his favourite quote right, so he emails it later: "We're playing for our sound to go inside the soul of the person, actually," Hendrix told Dick Cavett in 1969, "and see if they can awaken some kind of thing in their minds, 'cause there's so many sleeping people."