A man in his eighties died from coronavirus overnight, bringing Victoria's death toll to seven.

The latest death comes on the back of another spike in person-to-person community transmissions, with 62 Victorians contracting the virus from an unknown source. 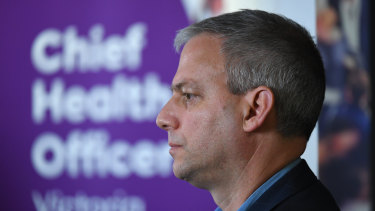 Chief health officer Brett Sutton says he is concerned by the rise in community transmissions. Credit:AAP

Dr Brett Sutton, Victoria's chief health officer, also revealed the state now has 1085 confirmed cases of COVID-19, a rise of 49 in the past 24 hours.

“But again, it's increased a lot in recent days. It was under 30 just a few days ago. We have to keep an eye on that.

“We have to understand that it's the physical distancing that we're putting in place that's going to make a difference in that regard. Because these people aren't easy to identify.

“They could be on the streets now. And many of them might have mild symptoms and so, therefore, not think they've got coronavirus when in fact they do.”

Dr Sutton said The Alfred hospital officials were investigating after a third cancer patient died on Thursday and seven more staff tested positive to the virus.

“The source is unknown. They are doing everything possible to get on top of it," he said.

“It does illustrate the fact that when you are looking after very vulnerable patients in hospital, in settings like this, you have to be absolutely strict with everything.”

Dr Sutton also said he would like the modelling used by federal and state governments to make decisions that were affecting all Australians to be released.

“Look, it's not my modelling to release. I'd be an advocate for having that modelling out there,” Mr Sutton said.

“We've used it for planning purposes [but] there might be a concern about it being misinterpreted.

“There's a saying all models are wrong. Some are more wrong than others. People take them literally. I think one thing to emphasise is that we literally can change the curve and so what's been modelled a month ago is probably wrong now. We're doing the right thing.

“We are actually making a difference in terms of how big that peak will be and when the peak might come.”