A confidential leaked document listing 15 Melbourne properties with faulty cladding that will get taxpayer-funded repairs also reveals the buildings are riddled with other construction problems.

The additional problems have sparked conflict between owners of some of the apartments – all built in the past 20 years – and the government, which has agreed only to fund the repair of cladding. 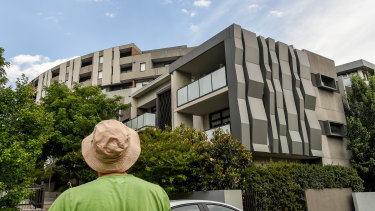 Brunswick’s Anstey Square is among the 15 buildings on the leaked list where cladding repairs will be publicly funded.Credit:Justin McManus

Inspections indicate more than two decades of lax regulation have left buildings with a range of fire safety issues that must be addressed to make them safe to live in.

Opposition planning spokesman Tim Smith said the government needed to be clear that they were paying only to repair the cladding on defective buildings.

"It is simply unfair on Victorian taxpayers for them to foot the bill for fixing up other building defects, not just dangerous cladding," he said. 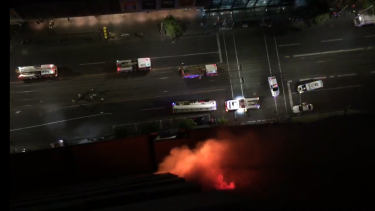 A resident’s view of the Neo 200 cladding fire in Spencer Street in 2019. The public will pay some of the repair bill.

He said the additional defects on the buildings showed the government’s Victorian Building Authority had for years allowed a culture where some builders and surveyors got away with sub-standard work or unsafe design. "These examples of dodgy practitioners and works show just how bad building regulation has been."

A 2014 fire in a Docklands’ Lacrosse tower raised public awareness about hundreds of apartment blocks and high-rise towers across Melbourne that had been clad in dangerous materials.

After London's 2017 Grenfell tower fire, where 72 people died in a building covered in the same material as the Docklands high-rise, governments stepped up efforts to make these buildings safe. 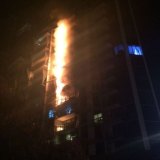 The 2014 cladding fire at Dockland’s Lacrosse tower that sparked concerns about the scale of the problem across Australia.Credit:MFB

Last year, the Victorian government promised $600 million to fix the most dangerous buildings.

A state government taskforce identified 432 extreme or high-risk buildings in need of repair. The list of the first 15 buildings to be fixed had been kept secret by the government until now.

Sahil Bhasin, from building consultants Roscon, said the builders and surveyors in the first 15 needing repairs should have been suspended.

He believes some of the projects on the list appeared to have been added for "political reasons" , as a result of strong public protest, rather than because they were fire safety risks.

"Very low risk buildings like Neo Apartments, which is over 90 per cent concrete and sprinkler protected [made] the list for political reasons, when buildings in other suburbs that really need assistance and that are constructed from 100 per cent expanded polystyrene with no active sprinkler protection don't even get looked into," he said.

Mr Bhasin said many buildings in Melbourne's middle and outer suburbs with no sprinkler systems and non-compliant cladding were "a ticking time bomb".

The report, created for the government as part of the process of establishing its new agency Cladding Safety Victoria, was meant to remain confidential because many owners of the buildings don't want their addresses published, due to the impact on their property’s value.

The Age is not publishing the addresses of most of the properties, although at least five have already appeared in the media because owners have come forward with their concerns. The government argues the addresses should not be disclosed this could increase the risk of an arson attack.

The first apartments to get publicly funded repairs include two built by LU Simon – Melbourne's two biggest cladding fires have occurred in its projects – and two by Hickory, which is facing disciplinary action over a fire in its Anstey Square tower in Brunswick. 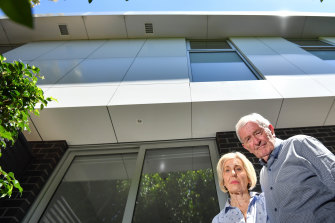 The list of problem buildings also shows that, rather than being concentrated in Melbourne's CBD, where concerns about cladding on high-rise towers have been focused, properties the government has promised to repair are located across the city.

Cladding Safety Victoria chief executive Dan O’Brien said his agency had already started work on a high-risk building in Preston that was not on the initial list of 15. Work would start on other buildings soon, he said.

"Every building is complex and the first buildings we fix will give us a broad set of outcomes we can apply across the whole program."

The government previously has said it chose the first 15 buildings to give it a mix of high-risk buildings of all different sizes, building materials and conditions.

Cladding Safety Victoria will have agreed by the end of this month on 45 buildings on which it will oversee repairs. The government has said it will fund fixes for all the extreme and high-risk properties.

To pay for it, in January a new levy on all projects worth more than $800,000 was introduced. It is predicted the levy will raise half the funds needed.