Levels of drinking among baby boomers have soared during lockdown.

More and more are consuming alcohol at a level ‘indicative of probable alcohol dependence’ including having their first drink in the morning, drinking alone, or feeling guilty about their level of consumption.

That’s what a new study of people aged 55-74 by King’s College London tells us. And I can’t say this comes as a surprise.

Anecdotally, among my friends and family, drink has become a crutch during those long, bleak months of isolation.

My female friends and I have had endless conversations about how, at the end of a long day working from home, trying to keep the house clean, shop, cook and supervise home-schooling, the one thing we look forward to is a nice glass of wine or a vodka and tonic. 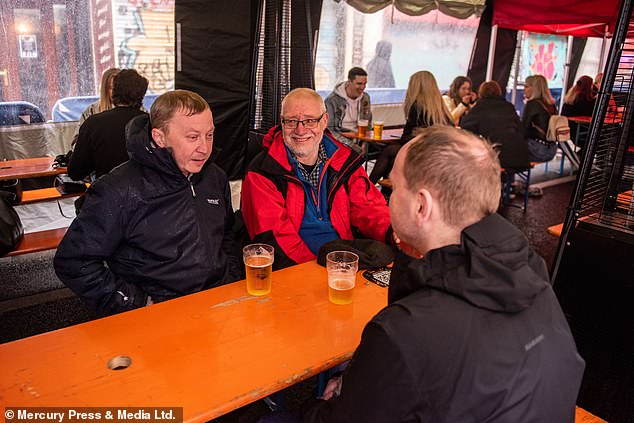 More and more are consuming alcohol at a level ‘indicative of probable alcohol dependence’ including having their first drink in the morning, drinking alone, or feeling guilty about their level of consumption (stock picture)

My preferred tipple these past months has been rosé with the addition of a handful of ice-cubes. I like to think the ice mitigates things slightly. But deep down I know I’m lying to myself. I’m still drinking far more than usual.

Lockdown drinking is different to the sort that happens when you’re having fun with friends. In lockdown, it’s grim, determined and aimed more at defusing the endless boredom.

At the pub or restaurant, dignity will tell you when you’ve had enough. But when the only distance you have to stagger is from sofa to bed, who’s to know? Only the bin men, who carry away the bottles for recycling.

Of course, not everyone has turned to alcohol. Plenty of people — or so it seems from social media — have been engaging in more edifying pursuits such as baking, yoga, reading Ulysses and so on.

I’ve certainly been walking a lot more, and cycling, which is probably no bad thing, and I go to bed much earlier — mostly, if I’m honest — to stop myself opening another bottle of wine. 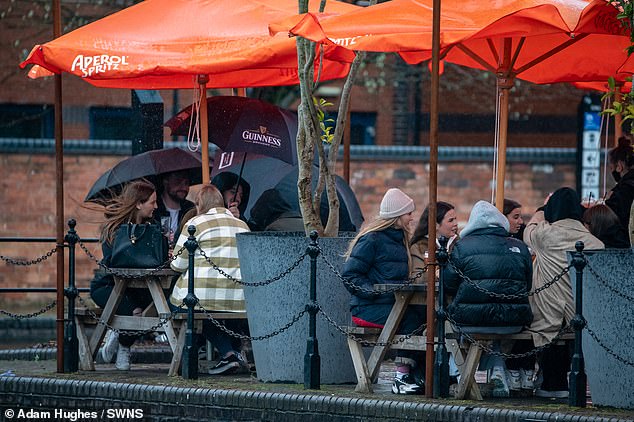 Lockdown drinking is different to the sort that happens when you’re having fun with friends. In lockdown, it’s grim, determined and aimed more at defusing the endless boredom (stock image)

But, in many cases, drinking is just the tip of the iceberg. The reality for most has been that a blanket of weary negativity has settled over us all.

I know young people who were doing brilliantly at school who have lost all drive and ambition; others who have become obsessed with computer games or developed eating disorders (doctors are seeing a sharp spike among these) or who have begun self-harming.

One consultant I know who specialises in treating such things is block-booked until September. Bearing in mind she charges £450 an hour, that’s saying something.

This is why I can’t blame people for bending the rules. Quite honestly, if seeing a friend on the sly helps someone keep their sanity, is that really so bad?

Even so, it’s odd how used we have become to having our freedoms restricted. Which is why it is vital to remind ourselves it is not normal, and should never be. 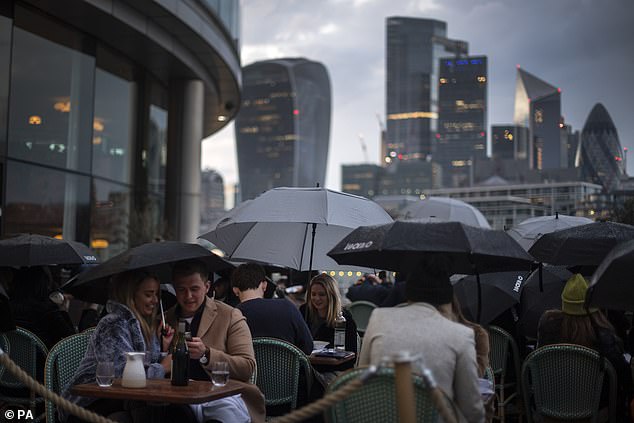 In many cases, drinking is just the tip of the iceberg. The reality for most has been that a blanket of weary negativity has settled over us all (stock image)

Politicians need to understand this. It’s not their fault they have tunnel vision: ministers are terrified of getting it wrong and unleashing a new wave of infections that might lead to another lockdown. That is why they are so cautious about the timetable.

But the last time we lifted lockdown, there was no vaccine. Now, more than 50 million of us have been inoculated, and the jab shows signs of protecting not just against infection, but of mitigating symptoms so people are far less likely to end up in hospital.

Even Professor Lockdown himself, Neil Ferguson, is optimistic that vaccines will quash what remains of the UK’s third wave, and that life in Britain will ‘feel a lot more normal by the summer’.

Is it really so wrong to want summer to start now?

Oh J.Lo, why do you have to stoop so low?

I have huge admiration for Jennifer Lopez — topping the bill at Sunday night’s Vax Live concert in Los Angeles — and the way, aged 51, she has stayed at the top in a game that is all about youth.

Surely it should be enough that she can sing, dance and beat most pop stars half her age hands-down? Does she really have to carry on dressing like a pole dancer on a podium in some nasty Ibiza nightclub? 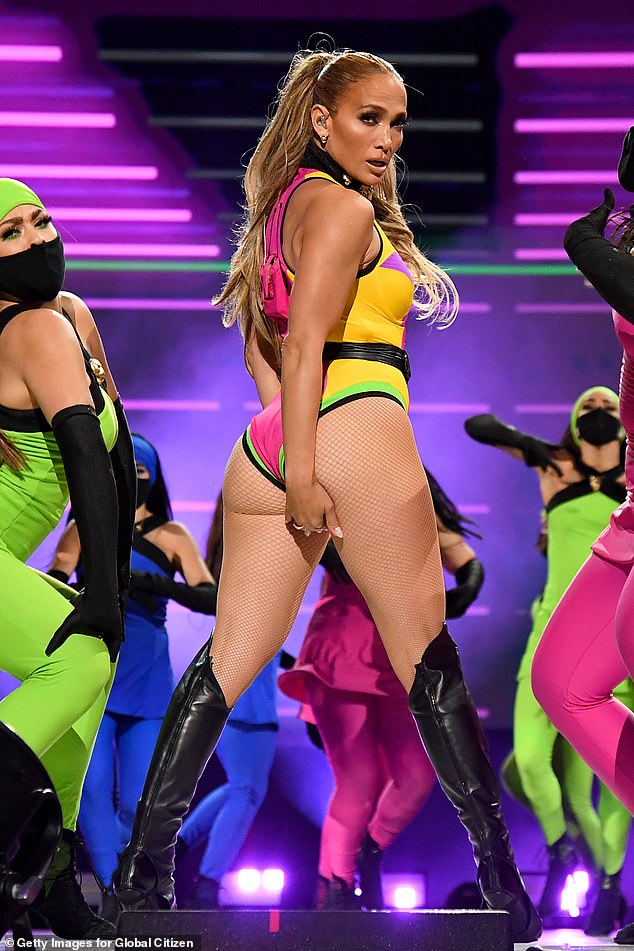 I have huge admiration for Jennifer Lopez — topping the bill at Sunday night’s Vax Live concert in Los Angeles — and the way, aged 51, she has stayed at the top in a game that is all about youth

Former Olympian Caitlyn Jenner — possibly the world’s most famous trans woman — has angered campaigners by saying that, in her opinion, female trans- gender athletes should be barred from competing on all-girls’ school sports teams.

For this she has been branded a TERF — a trans-exclusionary radical feminist — which is clearly nonsense. Jenner is just saying what most sensible people think: that physical differences matter in sports, and it’s not fair for someone with the build and strength of a male to compete against females — even if that person identifies as one.

That doesn’t mean she hates trans people; she’s just not driven by the kind of blind dogma that motivates so many in this debate.

More to the point, she believes in respecting the rights of other women.

Surely that’s the understatement of the year?

A British woman has died after undergoing a cut-price buttock enhancement in Brazil.

Apparently the ‘Brazilian butt-lift’ is one of the most requested surgeries of recent years, driven by the popularity of curvaceous celebrities such as the Kardashians.

Great. Another legacy of this vile clan of glorified strippers who have done more to demean and objectify women over the past decade than any amount of ‘toxic masculinity’.

Not quite sure what Keir Starmer and Sadiq Khan hope to achieve with all this boxing they’ve been doing on the campaign trail.

I’m assuming that the idea is to appeal to working-class voters, of the kind that have been abandoning the Labour Party in their droves.

There are several problems with this strategy. One, it’s clear Starmer couldn’t punch the leaves off a lettuce; and two, talk about patronising. What next, a flat cap and a ferret? 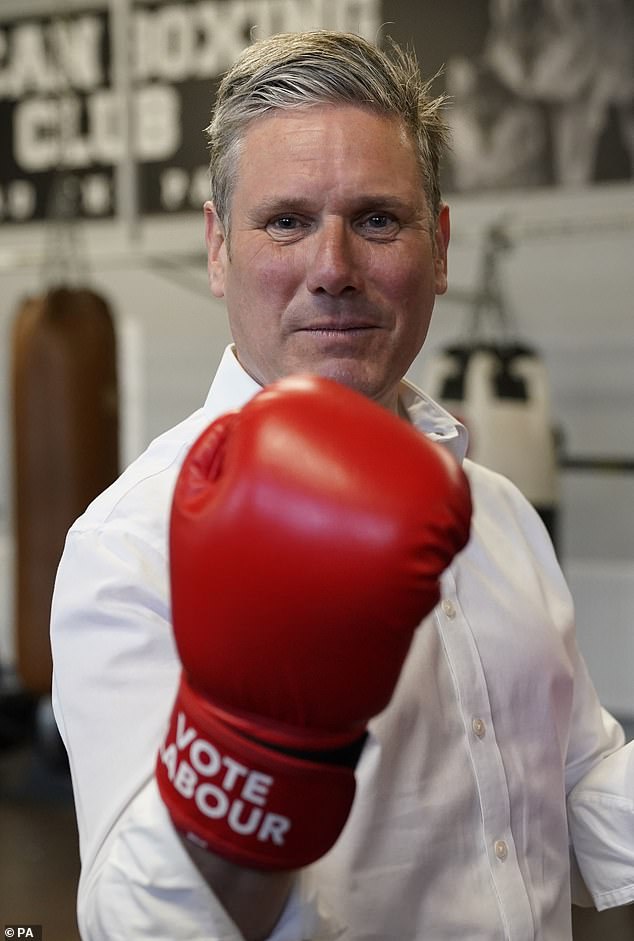 She’s a poet and we didn’t know it! But now we do. The Duchess of Sussex has written a book that ‘combines inspiring rhyming text’ with illustrations that capture the ‘evolving and expanding relationship between fathers and sons’, all interlaced with the duchess’s famous ‘warmth, connection and compassion’. That’s the same duchess who insisted on privacy, depriving the public of traditional coverage of Archie’s christening, and now tells us that the story is all about him — starting ‘as a poem I wrote for my husband on Father’s Day, the month after Archie was born’.

Bet Prince Charles can’t wait to get his signed copy.

We must stand up for brave veterans

The story of the two former paratroopers accused of the murder of IRA commander Joe McCann in 1972 is enough to make your teeth ache.

Having been exonerated of misconduct at the time, these two old soldiers — one of whom lost much of his memory after a stroke in 2005 — were hauled into court last week nearly 50 years after the event on the basis of information obtained in interviews back in 2010.

The case against them has collapsed — but the damage is done. They and their families have been put through the wringer, abandoned by a Government which pledged to put an end to the ‘unfair trials of people who served Queen and country’, yet failed to do so.

The job of military personnel is to do the dirty work politicians have neither the courage nor inclination to do themselves. Indeed, I’ve always felt that no one has the right to ask someone else to take a human life for them unless they really understand what that means — which is why I was so pleased when Johnny Mercer, a former Captain in the Army, was appointed Veterans Minister a couple of years ago.

And yet it seems even he — since relieved of his post — was unable to make the case for protection against prosecution for Northern Ireland veterans. Until that happens, and the British Government stands up for those who fought terrorism in this country, we will never be able to draw a line under that terrible conflict.