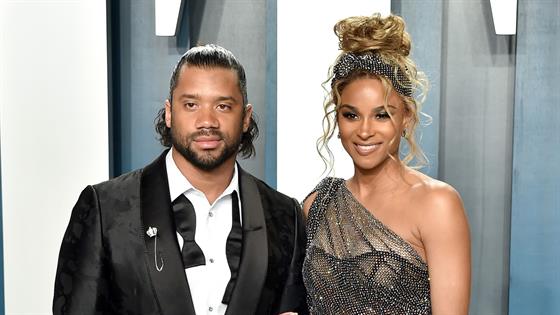 On Tuesday, the professional athlete made a hilarious cameo in the pregnant star’s Instagram video, where she was giving herself an at-home manicure. As the “One, Two Step” singer filed away at her nails, it became clear that social distancing has gotten the best of Russell.

“When the nail shop is closed,” she captioned the post. Sitting next to Russell as she filed her nails, Ciara addressed the camera, saying, “This is how it goes, ladies.” Meticulously filing each nail, she received an unimpressed glance from the Seattle Seahawks player, who appeared to be bothered by the sound.

Laughing at his expression, the mom of two continued, “Just another day of quarantine.” Still fazed by the noise, Russell gave Ciara an eye-roll and held his head in his hand. As she moved on to her next finger, he leaned back in his chair and rolled his eyes back, hoping she would be finished soon.

After sharing her video, Ciara headed to her Stories to show off the finished product before she applied her tips. “Nail saga,” she wrote over the image of her long and perfectly filed nails.

As the couple continues to practice social distancing, the “Level Up” singer has been candid about the struggles she’s been facing as an expectant mom. Last week, Ciara shared a video of herself FaceTiming the famous quarterback during her recent ultrasound appointment.

When the nail shop is closed 🤣. #QurantineLife

When the nail shop is closed 🤣. #QurantineLife

“The life of a pregnant woman in Covid-19 Era is very interesting… Russ had to FaceTime me from the car for our Ultrasound,” the songstress wrote on Instagram. Taking to Twitter, she added, “Ultrasound visits during this era of Covid-19 is a bummer because my hubby @DangeRussWilson can’t come in with me to my visit. Truly a challenging time for expectant mothers.”

Days before their check-up, the couple announced that they are expecting a baby boy with an adorable gender reveal video, where Ciara, Russell and their two children Sienna Princess Wilson, 2, and Future Zahir Wilburn, 5, who she shares with her ex Future, fired confetti guns into the sky and revealed the sex of the baby with their blue confetti.