Australia still has a chance to use existing technologies to tackle climate change and maintain living standards while creating new jobs, an exhaustive new study has found, but only if individuals, businesses and government act quickly to reduce emissions from every sector of the economy.

The report by ClimateWorks, called Decarbonising Futures, maps out in detail how Australia could go about achieving emissions reductions required across industry sectors to limit global warming to below 2 degrees, or to the more ambitious 1.5 degree target under the Paris climate agreement. 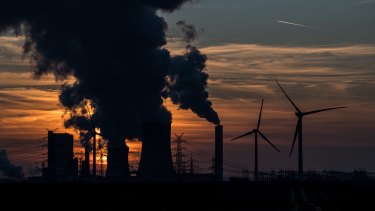 Australia can meet its international climate change commitments and create jobs during the recovery phase from the coronavirus recessions, according to a new report from ClimateWorks.Credit:Lukas Schulze/Getty Images

"If we get this right, we can meet Australia's international climate change commitments, create jobs in sustainable industries, and set ourselves up for a smoother and speedier shift to a zero emissions economy," said Anna Skarbek, the chief executive of ClimateWorks, a policy advisory body housed in Monash University.

She said the coronavirus pandemic has made the need for immediate "all-in" action even more urgent as governments spend the coming weeks and months planning how they will stimulate their economies as the crisis passes.

Modelling outlined in the report suggests Australia's economy has a two in three chance of hitting net zero emissions by 2050, if "governments drive policies to limit emissions and facilitate technological innovations" while facilitating collaboration with businesses and individuals across all sectors.

The current trajectory of global warming is above two degrees by 2050, an outcome which is expected to lead to large scale human migration, increased spread of infectious diseases, critical water shortages and huge biodiversity loss, including of the world's coral reefs.

Even at 1.5 degrees of warming the Intergovernmental Panel on Climate Change predicts coral reefs will decline by 70 to 90 per cent.

Decarbonising Futures found emissions reduction consistent with 1.5 degrees warming, and hitting net zero by 2050, would require significant action over the next decade.

Making energy generation 100 per cent renewable and emission free is key, as it enables other industry sectors to decarbonise while remaining connected to the energy grid.

At present Australia's electricity network uses about 25 per cent renewable energy. Renewables must reach 75 per cent of the grid by 2030, and 100 per cent by 2050.

The rate at which renewables replace coal generation, and then gas, is crucial according to the report, which predicts significant associated cost savings.

The report outlines how available techologies can reduce emissions. In the building sector it notes cross laminated timber, which has been already used to build a 10-storey office block in Brisbane, could replace carbon intensive steel and concrete.

Installation of such technology would provide significant new employment. Under government stimulus the boom in solar installation has created around 18,000 jobs, the report shows.

However, before the coronavirus turned the world upside down, the Morrison government was sceptical about commitments to transition to the economy to net zero emissions.

The Prime Minister said in February he would "never make a commitment like that if I couldn't tell the Australian people what it would cost them", and Resources Minister Keith Pitt said "coal will remain an important part of the world's energy mix decades into the future".

The government is developing a long term emissions reduction strategy, but has not indicated when it will be released.