Bunny Wailer, one of the most influential singers in reggae music history, has died. He was 73. 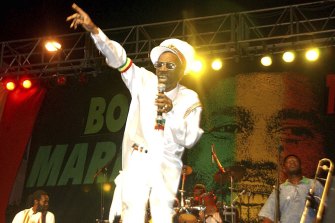 Wailer’s death was confirmed by his manager, according to The Associated Press. The cause of the death was not immediately known. Jamaican newspapers reported that he had a stroke about a year ago.

Best known for his work in songs including Simmer Down, Rude Boy, Get Up, Stand Up, I Shot the Sheriff, Stir It Up, Blackheart Man and dozens more, Wailer’s Zen-like approach to music creation helped manifest a whole new language focused on groove and vibe. After leaving the Wailers in 1973, Wailer carried on as a solo artist, releasing more than two dozen studio albums.

An epochal moment in Caribbean cultural history occurred by happenstance when in 1963, Wailer moved into the same Kingston apartment complex as a young Marley. Originally a quintet, they were schooled in harmony singing by influential vocalist Joe Higgs. A year later the group released Simmer Down, a bouncy dance song that became a building block for a movement.

By 1965 the Wailers had pared down to the trio of Wailer, Marley and Tosh and continued to make hits. Rude Boy, about the booming generation of young toughs running the streets of Kingston, has since become shorthand for a ska fan.

In 1969, the Wailers entered Lee “Scratch” Perry’s Black Art studio to create Downpresser, a riff on the song Sinnerman. Slowing ska and rocksteady’s tempos by a third, it and the early dub remix B-side, Downpresser Version, helped transform Kingston, Jamaica’s club and sound-system scene. The albums that followed, Catch a Fire and Burnin’, blew up in Jamaica, then in England, Europe and America.

Wailer left the Wailers not long after, citing frustration with touring and Marley’s increasingly prominent role. A longtime Rastafarian who put his religion above all else, he spent his creative life in a vast compound and received callers when he desired.

“Music is based on inspiration and if you’re in an environment where you are up and down, here and there, that’s how your music is going to sound,” Wailer told The Times. “People get taken away in getting themselves to be a star and that is a different thing from getting yourself to be a good writer, musician, producer and arranger.”

Wailer was the last of the original Wailers. He was preceded in death by Marley, who died of complications from cancer in 1981; and Tosh, who was murdered in Kingston in 1987.