Younger Australians have not yet come forward in droves for the AstraZeneca vaccine, despite the country recording its highest daily number of vaccinations with 161,390 doses administered on Thursday. 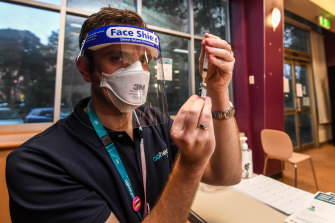 More than 7.8 million doses have been administered across the country.Credit:Justin McManus

“I can’t think of a bigger black-and-white failure of public administration than this,” he said on ABC’s Afternoon Briefing on Thursday.

National Cabinet will meet at 9am on Friday for the second time this week after days of open conflict between some states and the Commonwealth over vaccine supplies and international arrivals.

The Queensland and Victorian Premiers have called on the federal government to lower the cap on international arrivals as four states and territories remained in lockdown with 26 new cases confirmed across NSW, the Northern Territory and Queensland.

Finance Minister Simon Birmingham said the vaccine rollout had faced issues with changing expert advice and getting enough doses into the country.

“We’ve had challenges in terms of supply,” he said on Seven’s Sunrise on Thursday morning.

“European countries and drug companies have favoured those nations who had high rates of COVID for the delivery of vaccines like Pfizer, which has put countries like New Zealand and Australia at the back of the queue in terms of receipt of some of those vaccines, but they’re coming.”

Mr Turnbull said governments made mistakes, but getting the vaccine rollout done quickly should have been doable. “These lockdowns are a consequence of the failure to get the vaccination done, and it is a massive fail,” he said.

More than 736,000 Australians under the age of 40 have had at least one dose of a coronavirus vaccine and the country’s oldest residents are the most fully protected 128 days into the rollout.

Data published by the Commonwealth on Thursday for the first time provides a breakdown of vaccination rates by five-year age groups and gender, as well as first and second doses. A data breakdown by states is expected to be published on Friday.

Earlier on Thursday, COVID-19 taskforce commander Lieutenant-General John Frewen said he was looking forward to getting more Australians vaccinated as he worked to speed up the rollout.

“We are getting as many of the vaccines as we can, as quickly as we can, we are producing AstraZeneca here domestically and we are getting Pfizer from overseas,” he told Nine’s Today show.

The number of under-40s being vaccinated is expected to grow after Prime Minister Scott Morrison announced a no-fault indemnity scheme for doctors on Monday.

“In the last two days since the Prime Minister made this announcement 2616 Australians, under 40, have chosen with informed consent to have AstraZeneca,” General Frewen said. “That’s 2600 Australians who feel right now they would rather have the available vaccine than wait.”

The new data shows that Australian women have been more likely to have received their first vaccine shot than men.

Among all age brackets from 16-19 year-olds to 55-59 year-olds, a higher proportion of women than men had received a vaccine dose. It was only among those in their 70s or 80s that there were higher vaccination rates in men than women.

Based on the data released on Thursday and the latest population estimates from the ABS, The Sydney Morning Herald and The Age estimates that among Australians over the age of 15, about 31.1 per cent of females and 28 per cent of males have received the first vaccine dose.

That means about 3.26 million females and 2.84 million males have received a vaccine dose.