Prince Edward has thanked NHS workers for being ‘ready and willing to care with compassion’ as he opened Britains newest Nightingale hospital in Bristol today.

The Earl of Wessex, 56, spoke from his home in Bagshot Park, Surrey, which he shares with his wife Sophie, Countess of Wessex, 55, and their two children Lady Louise Windsor, 16, and James, Viscount Severn, 12.

Edward wore a grey suit and smart red tie for the virtual opening, which he described as a ‘curious experience’ to be opening a hospital which he hoped may not be required in the fight against coronavirus.

He also praised the frontline staff for sharing the ‘passion of their predecessors’ Florence Nightingale, the founder of modern nursing and British-Jamaican businesswoman and nurse Mary Seacole. 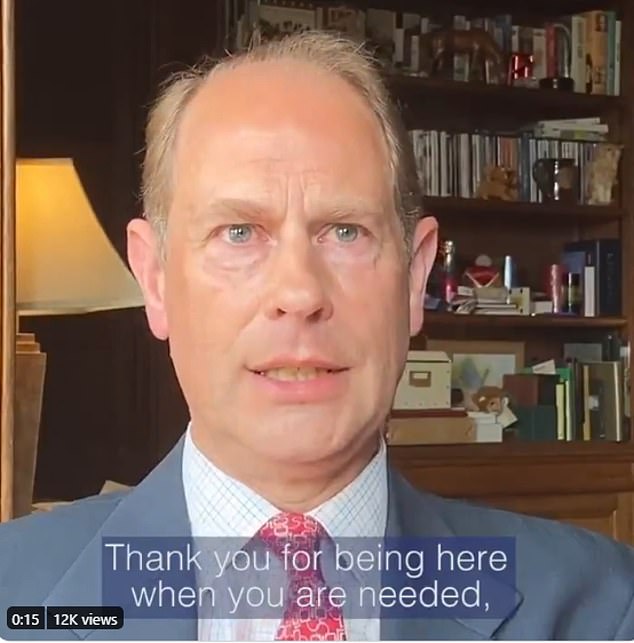 Speaking against the backdrop of a bookcase, Prince Edward, 56, thanked NHS staff as he opened the Nightingale Hospital in Bristol

The royal follows in the footsteps of Prince Charles, Prince William and the Duchess of Cornwall, who have all opened Nightingale field hospitals this month.

Speaking against the backdrop of a bookcase, Edward said: ‘Thank you for inviting me to open the NHS Nightingale hospital Bristol.

‘I’m delighted that the Severn hospital network now has this extraordinary facility to help in the fight against Covid-19.;

He continued: ‘Sincere congratulations must go to out to each and every one of you involved in construct this hospital in just 24 days – quite a remarkable achievement and one you should feel justly proud of. 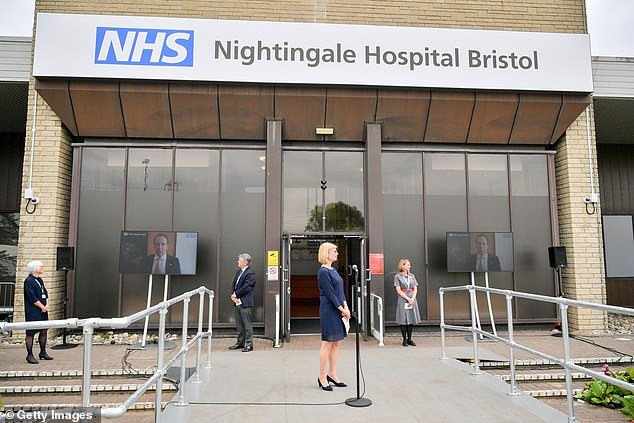 The royal said it was ‘curious’ to be opening a facility that he hoped would never be in use (pictured, the Nightingale Hospital Bristol)

‘Today we once again owe a huge debt of gratitude to everyone working in the health service – whatever your role.

The royal went on: ‘It is a somewhat curious experience to be asked to open a facility which we hope will never be required.’

He continued: ‘To everyone assigned to work here – thank you. Thank you for being here when you are needed, ready and willing to care with compassion, and for maintaining the ethos and passion of with your predecessors Florence Nightingale and Mary Seacole.’

‘So with no further ado I now declare the Nightingale Hospital Bristol open.’ 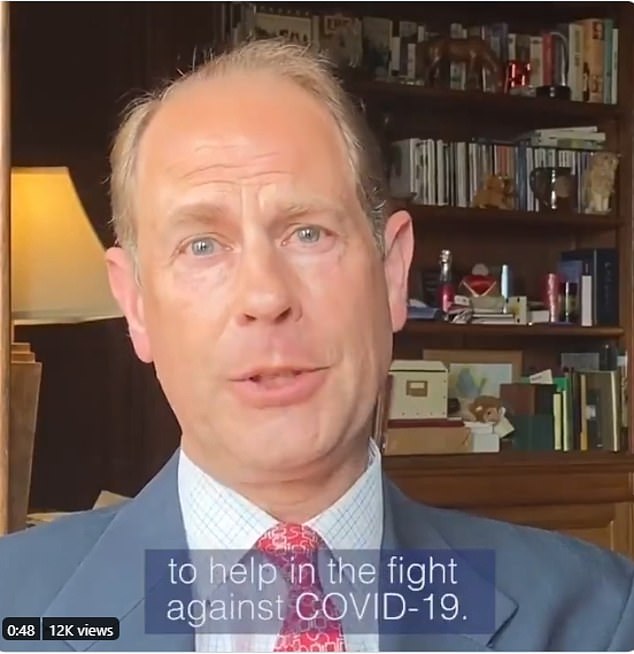 The Earl of Wessex spoke from his home in Bagshot Park, Surrey, to open the Nightingale Hospital

Prince Edward joins a host of several other royals who have opened NHS Nightingale Hospitals as the country battles coronavirus.

Prince Charles opened the first NHS Nightingale Hospital at the ExCeL centre in London last month, with Camilla, the Duchess of Cornwall opening one in the North West and Prince William opening the NHS Nightingale at Birmingham’s NEC.

The Bristol facility, based at the University of the West of England’s Frenchay Campus, will provide up to 300 intensive care beds for coronavirus patients – six times the intensive care capacity of a large hospital in the south west.

Health Secretary Matt Hancock, speaking in a video played at the opening ceremony, said the Nightingale hospitals across the UK were to ensure the NHS’s founding principle that ‘it will always be there for anyone who needs it’ 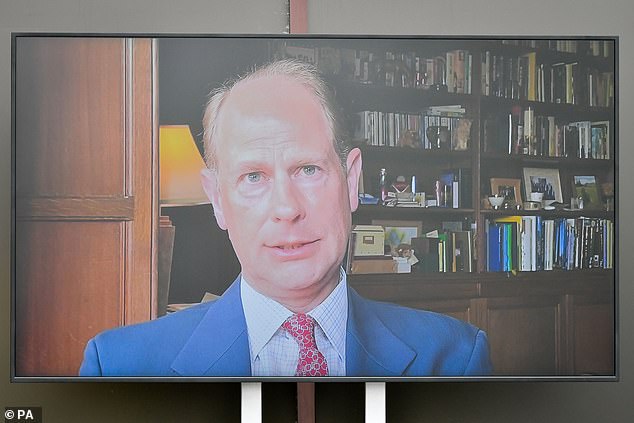 Prince Edward, who appeared to open the hospital virtually from his home, paid tribute to NHS workers during his speech

Staff are being drawn from within the NHS and from across a range of organisations. 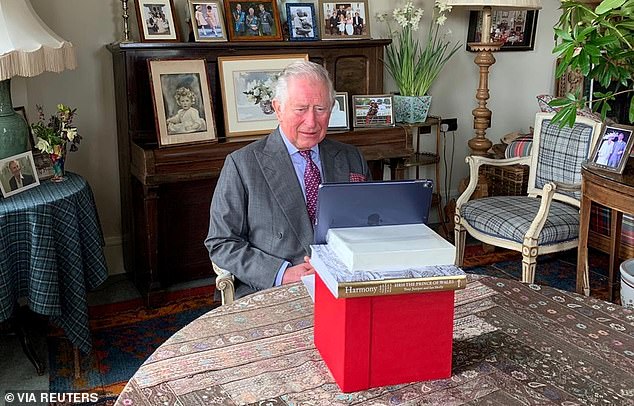 Prince Charles opened the NHS Nightingale Hospital in London, from his home in Birkhall, Scotland 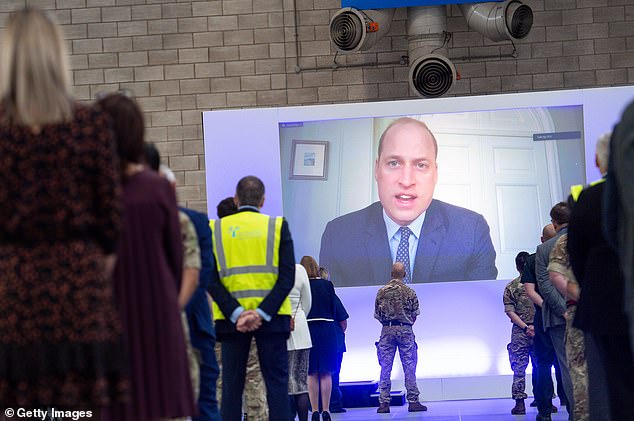 Last week the Duchess of Cornwall described the NHS Nightingale Hospital North West at the Manchester Central Convention Centre as bringing ‘light to a dark time’ at its official opening.

Speaking in a video from her Scottish home at Birkhall, Camilla said: ‘In creating this Nightingale hospital, you have truly brought light to a dark time. But this is not surprising. Manchester is a past master at bringing light to dark times.

It was the third Nightingale hospital to open, after others in London and Birmingham, and will provide oxygen therapy and general medical care to those not needing critical care. 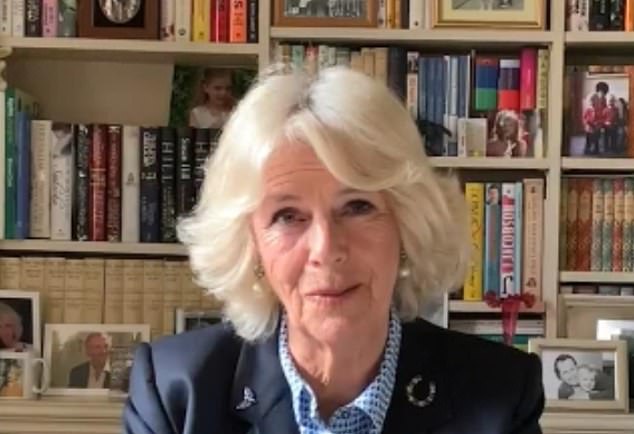 On April 3 Prince Charles officially opened the first NHS Nightingale at the Excel centre in east London, and Prince William, who last appeared via video-link to praise the ‘selfless commitment’ of NHS staff when he opened the NHS Nightingale Hospital in Birmingham.

And Captain Tom Moore, the 99-year-old veteran, was invited to do the honours for the NHS Hospital in Harrogate, North Yorkshire, after raising a staggering £27million for the NHS, appeared at a virtual ceremony this afternoon.

After the Nightingale Hospital in Bristol, there are two others under construction, which are in Washington, Tyne and Wear and Exeter, Devon. 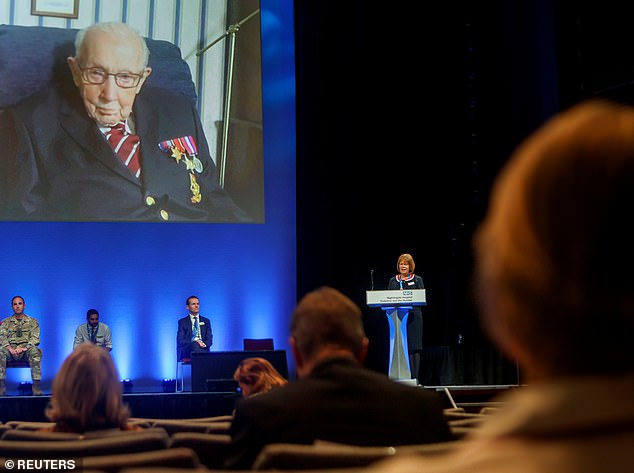 Captain Tom Moore spoke via video-link at the opening of the NHS Nightingale Hospital Yorkshire and the Humber in Harrogate, North Yorkshire