Independent senator David Pocock says he has received no guarantee from the government wages will rise as a result of its industrial relations legislation as employers warn the changes will lead to increased strikes.

The government secured the passage of the contentious Secure Work, Better Pay bill through the Senate after striking a deal with Pocock on Saturday night that included increased greater protections for small businesses and the establishment of a committee to look at welfare payments. 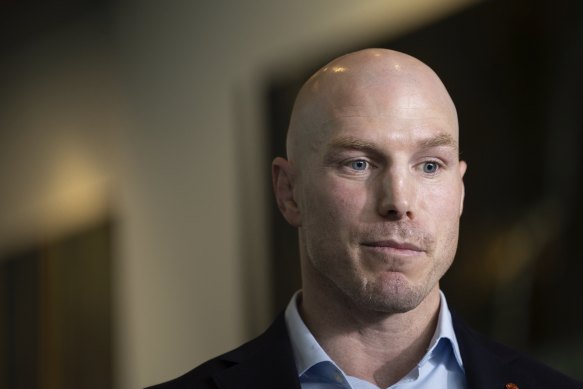 Independent senator David Pocock has struck a deal with the government over its industrial relations bill.Credit:Alex Ellinghausen

Pocock told ABC RN Breakfast on Monday morning the deal, which expands the use of multi-employer bargaining across the economy, was “not going to please everyone”.

“I’m not here to represent big business, I’m here to listen to all the different perspectives and then make a decision, and I’m really happy with where we’ve landed,” Pocock said.

Asked twice whether he’d received a guarantee from the government that wages would go up, Pocock responded, “there’s no guarantee, that’s what this bill sets out to do, and that’s something you can ask the government”.

“Clearly, there are workers in Australia who need a pay rise, the cost of living and inflation is making it very hard for people to make ends meet and, importantly, as part of the negotiations, I pushed really hard to ensure that we legislate a pathway to having more of a discussion about things like JobSeeker,” he said.

The concessions agreed to by the government have paved the way for the bill to be voted on in the upper house this week.

Workplace Relations Minister Tony Burke, who struck the deal with Pocock, said he had “no doubt that the Liberal Party will do everything they can to slow down pay rises every additional minute possible”.

“They’ll do everything they can to slow it down, but I’m very confident with the agreements that were forged over the weekend that this will happen this week,” he said.

As well as the establishment of an economic inclusion advisory committee, the bill will make it easier for a business with 50 employees or fewer to opt out of multi-employer bargaining by putting the onus on unions to make the case for why that business should be included. Businesses of fewer than 20 people will also be able to opt in or out of multi-employer deals.

Tasmanian senator Jacqui Lambie told Sky News the government would have been forced to split the bill, as Pocock and other crossbenchers had originally wanted, if Pocock had not agreed to a deal.

“I’ve been up here long enough to see how it works, and that is how it should have been done,” Lambie said on Monday morning.

Australian Industry Group head Innes Willox said there was still “an enormous amount of vagueness around who can get roped into multi-party bargaining”.

“There is an exemption for, [as] David Pocock says, 97.5 per cent of small businesses or those employing 20 or less, but there’s a lot of businesses in Australia who employ more than 20 people,” Willox told ABC radio.

The federal opposition, Australian Chamber of Commerce, the Business Council of Australia and the Minerals Council have also criticised the deal because it would increase the likelihood of industrial action.

The government has repeatedly pointed to the use of multi-employer bargaining in member countries within the Organisation for Economic Cooperation and Development as a marker for its success.

In response to questions from this masthead, OECD director of employment, labour and social affairs, Stefano Scarpetta, said “systems characterised by predominantly sector-level bargaining tend to be associated with lower inequality, but not necessarily to stronger wage growth”.

“Despite undeniable challenges, I think that, if well-designed as to strike a balance between inclusiveness and flexibility and implemented, collective bargaining remains an important instrument to deal with both old and new issues in the labour market,” he said.

But Scarpetta also said that in countries where collective bargaining was strong, recent bargaining rounds had not brought major wage increases where there had been food and energy price hikes.

“In some European countries facing soaring inflation and high uncertainty related to the war in Ukraine, social partners have opted to postpone the conclusion of the agreement to a later stage and reach a ‘bridge agreement’ instead that provides some support to workers without fuelling further inflationary pressure,” he said.

Cut through the noise of federal politics with news, views and expert analysis from Jacqueline Maley. Subscribers can sign up to our weekly Inside Politics newsletter here.