A plus-size woman has revealed she thinks society is ‘brainwashed’ into thinking bigger people need to be on a diet – and refuses to go to the doctors who quiz her about her weight.

Tiffany Price, 22, from Dorset, has struggled with her weight since she was 13 years old, having been bullied for her size – which led her to hate her body.

The size-24 has tried to lose weight several times over the years but called going to the doctors ‘a battlefield’, revealing they would tell her to go on diets restricted to 1,000 calories and suggest meals-plans like ‘only eating brown food’.

But now the former cheerleader, who says she goes to the gym six times a week and believes in intuitive eating by letting her body tell her what it needs, has accepted her 21st 5lbs figure.

She revealed: ‘When I found intuitive eating, my whole mindset shifted and I realised we had been brainwashed by society to think bigger people have to be on a diet.’ 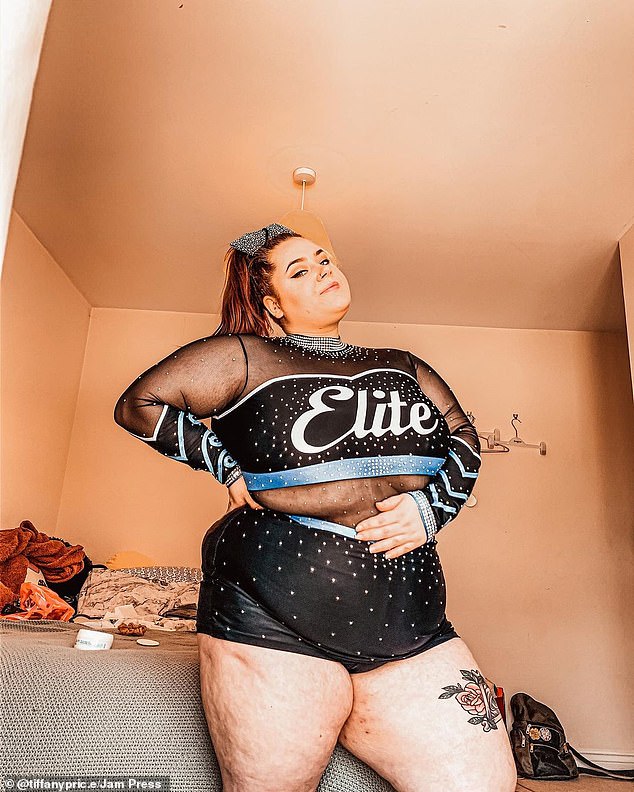 Tiffany Price, 22, from Dorset, has opened up about how doctors told her to eat just 1,000 calories a day – even though she works out six times per week and doesn’t eat processed foods 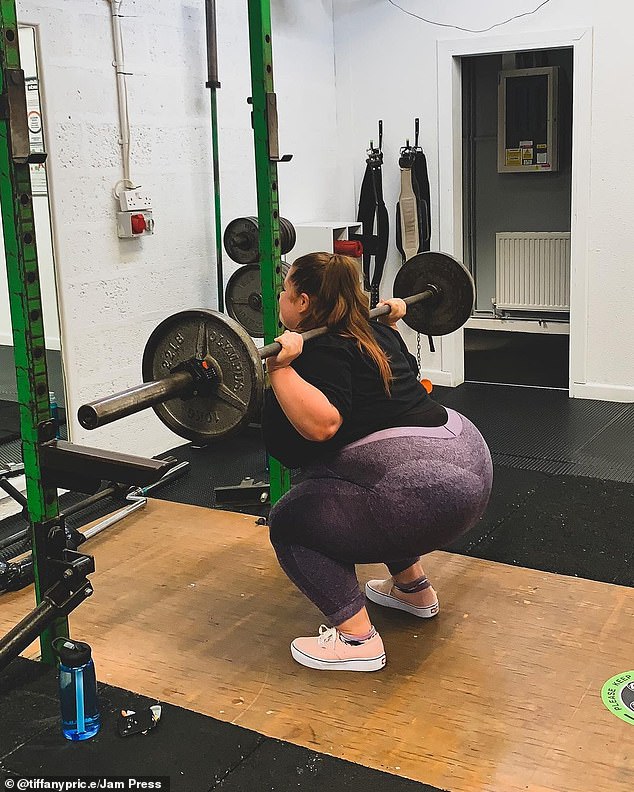 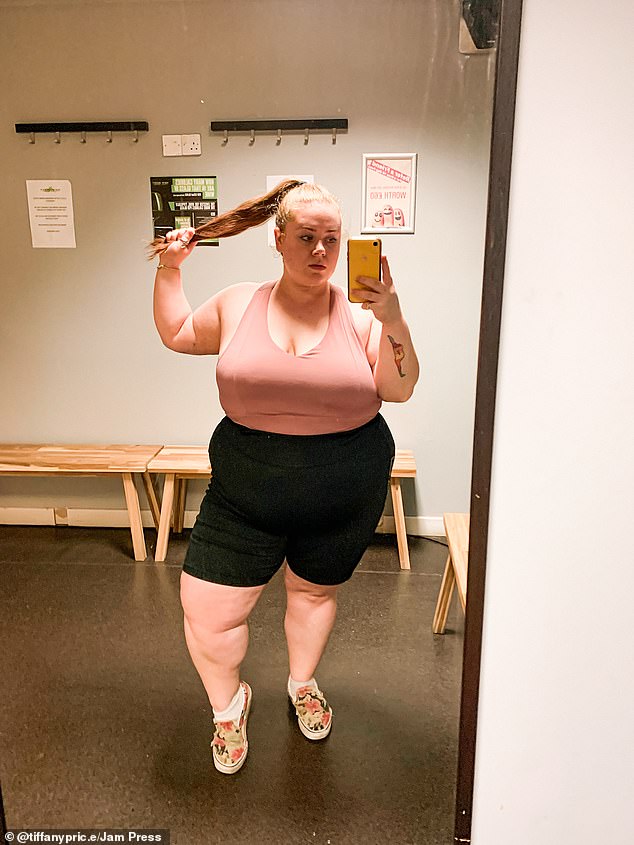 The 22-year-old revealed she ‘loves weightlifting’ in the gym, and often goes up to six times a week 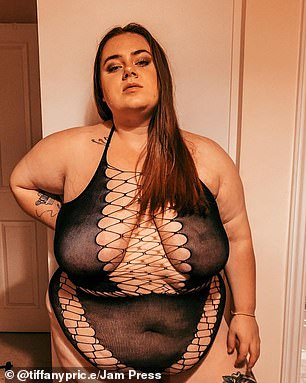 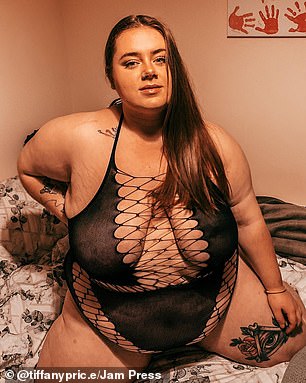 After battling her weight for years and struggling with confidence, Tiffany has now accepted her body and is determined to help others do the same

The plus size woman said she had long battled with her weight, explaining: ‘When I was younger, I would literally pray to God that I would wake up slim and I never felt that how I looked was okay.’

Tiffany works out up to six time a week, between 45 minutes to an hour each time, and said she has long been a fan of the gym.

She explained: ‘I have always been into fitness and have been dancing since childhood.

‘Up until recently I was also a cheerleader and have had a gym membership since sixth form.’ 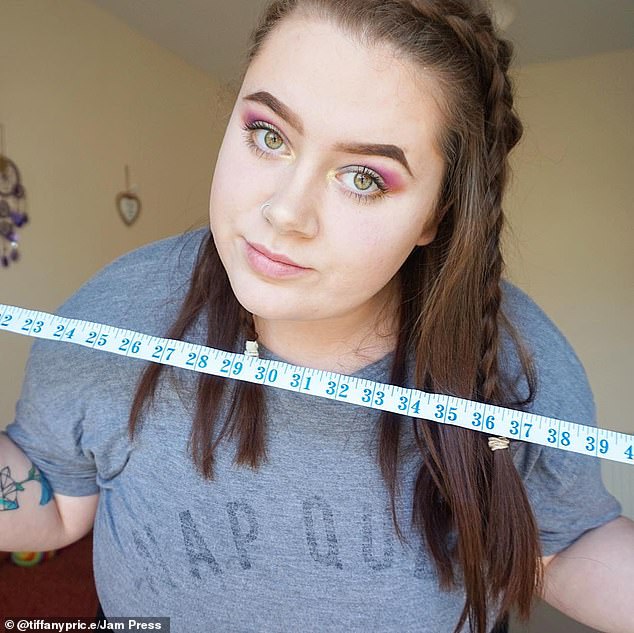 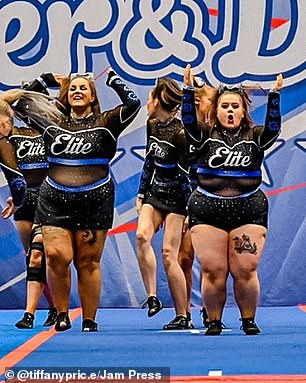 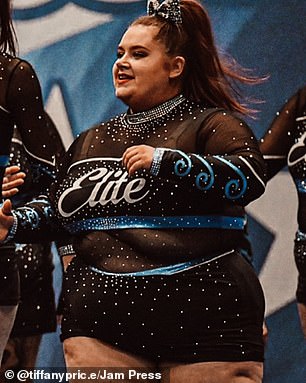 Tiffany has long been a lover of physical exercise and dancing, and was a cheerleader up until recently (pictured, in her cheer costume) 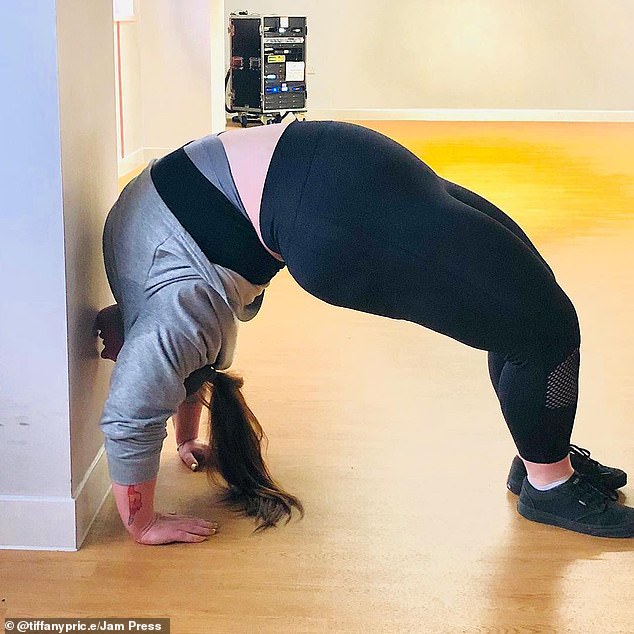 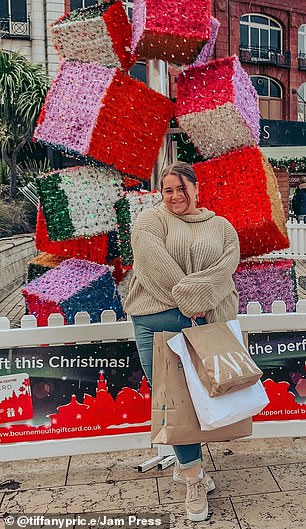 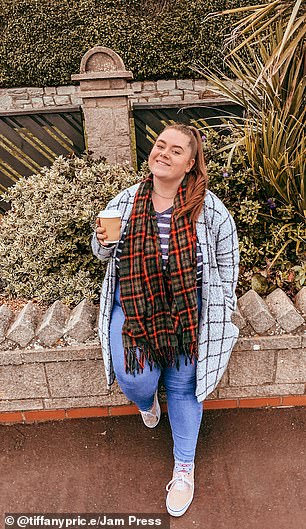 Tiffany, who goes to the gym six times a week and believes in intuitive eating by letting her body tell her what it needs, has accepted her 21st 5lbs figure

Tiffany, explained: ‘I’m newly vegan, but within the realms of vegan food I eat pretty much whatever I want or feel I need.

‘Since listening to my body I have found that different foods affect me in different ways.

‘Heavily-processed foods make me feel quite ill and lethargic so I tend to avoid these if I have a lot to do the next day.

‘I opt for freshly cooked meals with a mix of protein, carbs and vegetables. A staple meal is tofu, rice and lentils with veg.’ 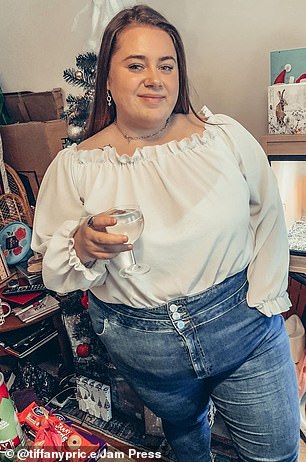 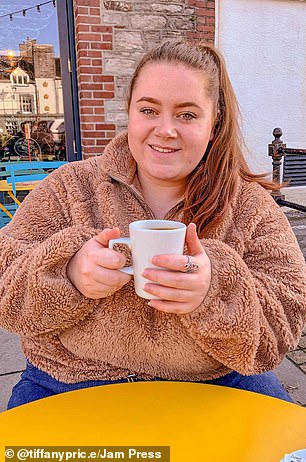 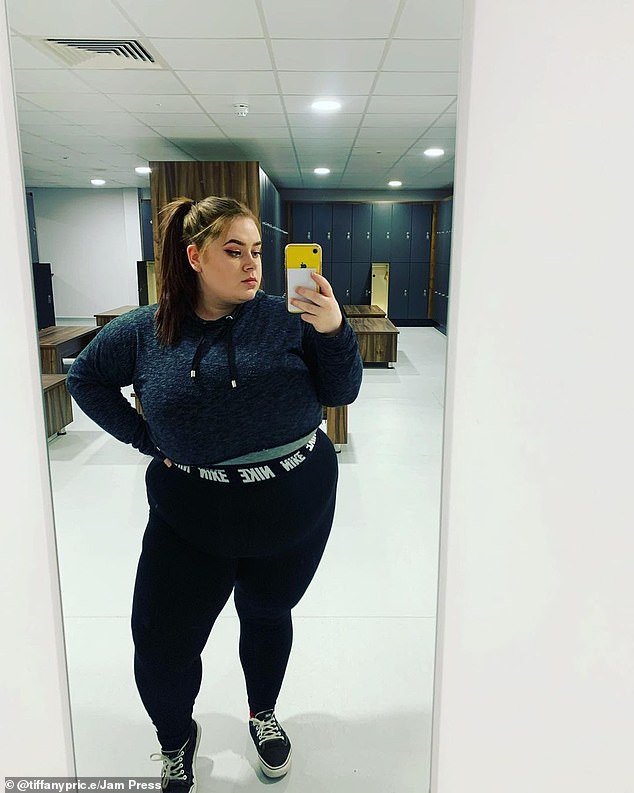 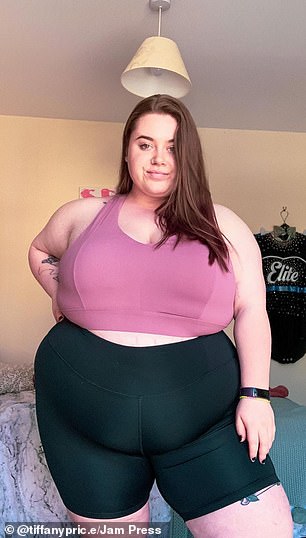 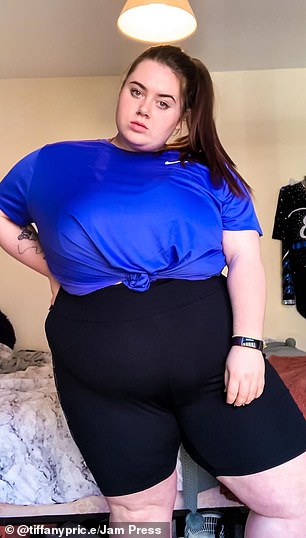 But she said that others make assumptions about her weight and health, saying: ‘The main assumption about me is that I’m lazy and eat rubbish when I actually have a fairly balanced diet and am really active.

‘People also think I’m only exercising to lose weight rather than enjoyment, which I think is down to diet culture making us believe that exercise is for nothing but punishment.’

She continued: ‘Every doctor’s appointment is a battlefield to the point where I won’t go to the doctors unless I really have to.

‘Every time, they look at my weight before my symptoms and it can be really hurtful, even to someone as confident as myself. 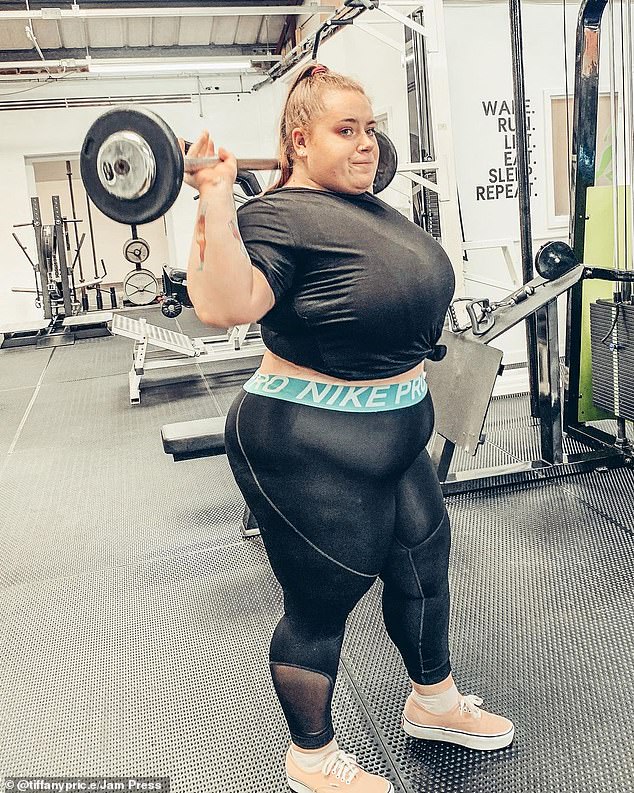 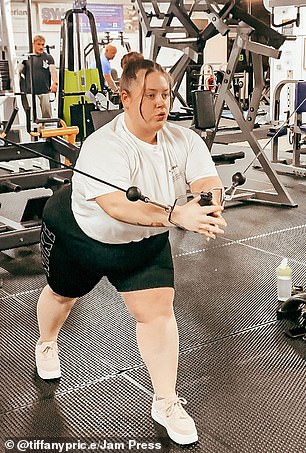 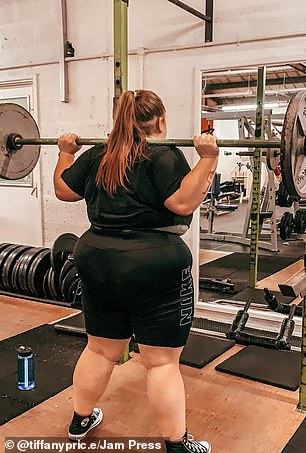 She called the gym ‘a safe space’ where ‘nothing really matters’, but revealed many other attendees have tried to offer her plans to help her lose weight 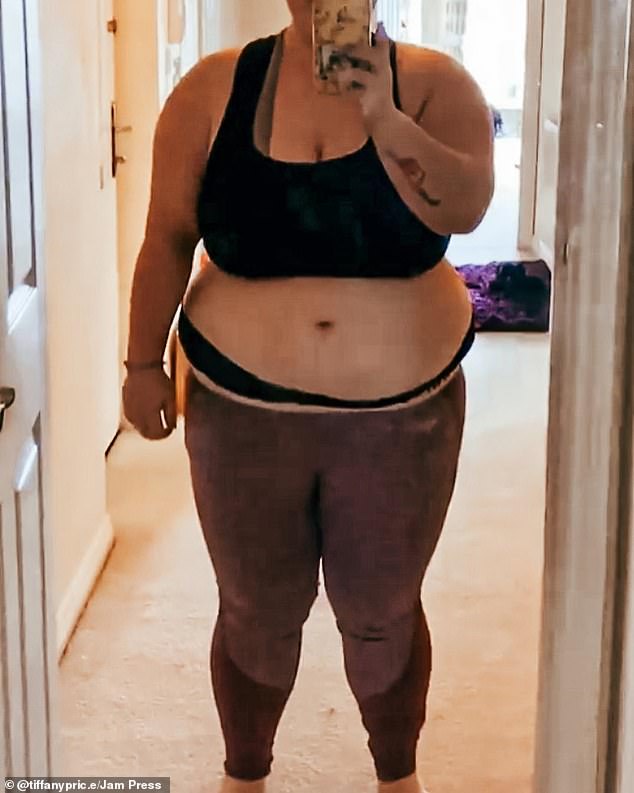 Tiffany said she has often received abuse from strangers in the streets and online  about her weight, with many making cruel jokes about her size

‘Back when I was on yet another weight loss journey I went to the doctor to ask about it and he told me to eat 1,000 calories a day. When I asked what kind of food he would recommend he said he didn’t care if it was butter and sugar – as long as it was under this calorie amount.’

She explained: ‘Another doctor told me to eat only brown foods or to try the Keto diet – this information just isn’t right, and if I didn’t know what I do about nutrition I could have done those diets and it would have been dangerous.’

Talking about the abuse she faces from strangers, Tiffany added: ‘I’ve been asked ‘who ate all the pies’, ‘who am I trying to fool’, called ‘fatty’ and so much more.

‘It’s awful and I can’t help but think if this happened to someone who didn’t have the confidence I do, how would they feel?’ 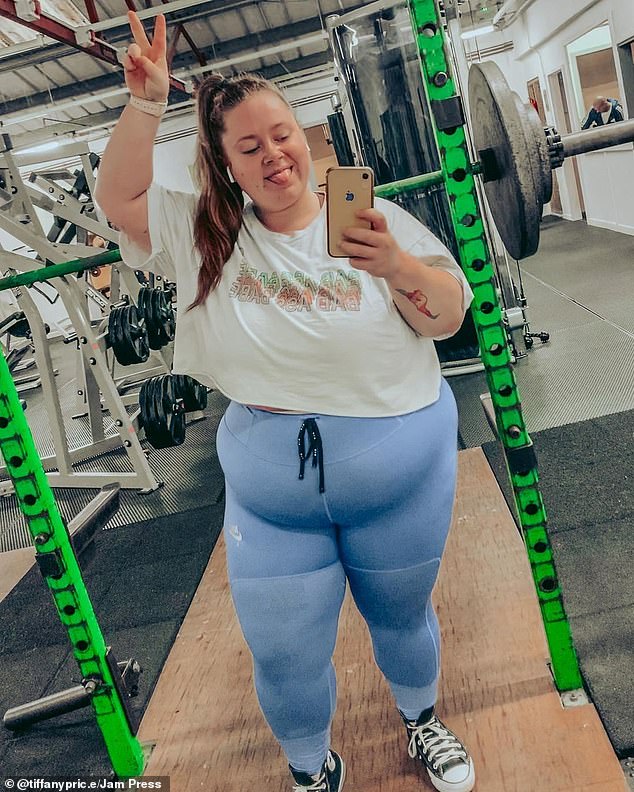 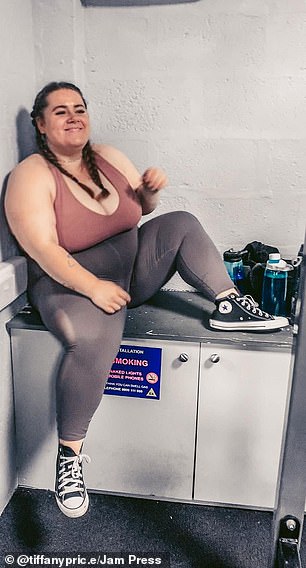 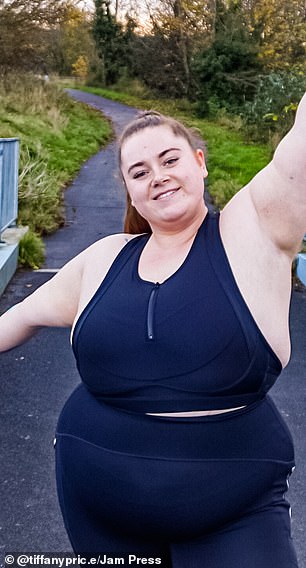 Tiffany explained that weightlifting has helped her to overcome different ailments, including chronic back pain and a knee injury

The body-positive campaigner also receives unwanted attention when she goes to the gym.

She said: ‘In past gyms I was constantly asked if I needed help or guidance, or some kind of plan to help me lose weight, even though I was squatting regularly and clearly knew what I was doing.

‘I find exercise is so good for both my mental and physical health. 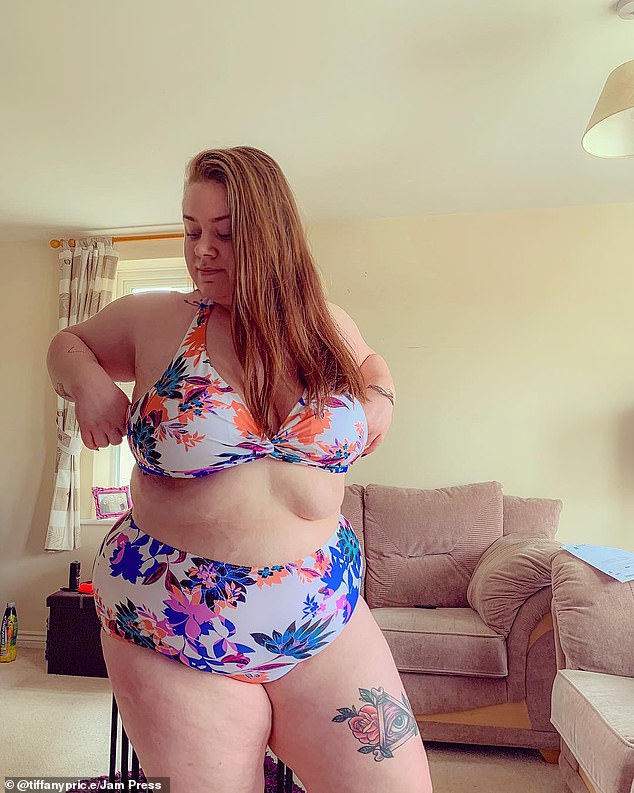 In the last few years, Tiffany discovered intuitive eating and has since abandoned efforts to diet or lose weight

‘The gym is my safe space where nothing else really matters and physically I suffer from chronic back pain and a knee injury, so weightlifting really helps strengthen those muscles.’

‘I like to listen to my body and let it tell me if I need to rest, which I think is really important as resting can make sure you are able to perform to your best potential.’

Tiffany started sharing her fitness journey on Instagram two years ago and originally mostly posted about weight loss – but soon became ‘sick’ of worrying about food. 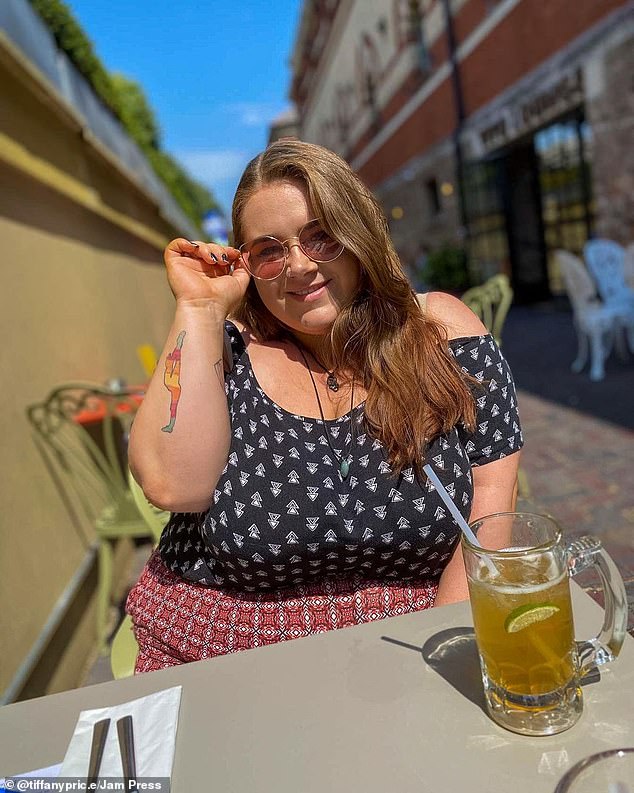 The body positive campaigner now ‘listens to her body’ and eats the food she ‘needs’ (pictured, enjoying a drink in the sunshine)

The gym-lover, who currently has 7,249 followers, added: ‘I couldn’t understand why thinner people were able to just eat pizza and not worry about it.

She explained: ‘Now, my page is a safe space for people to come and start the journey of loving themselves, learning their worth and learning that exercise shouldn’t be a punishment.