Such a relief to see Australian companies have some standards. Finally. Those standards have become very clear in the past 48 hours as conspiracy pedlar Pete Evans has been dumped by brand after brand, business after business.

The celebrity chef already had a sizeable list of reasons not to promote him, before he took to social media on Monday and wrought untold damage on his personal brand. Five years ago, his paleo book for babies was dumped by publishers because it suggested feeding infants a DIY baby formula made from bone broth. He has backed anti-vaxxers, anti-fluoriders, anti-sunscreeners. Most recently he spruiked a device which he claimed would cure COVID-19. 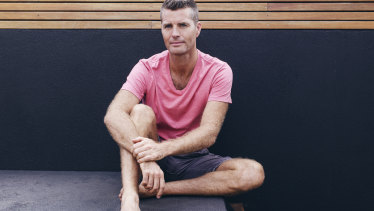 All this has added up to a celebrity willing to gamble with Australian lives. Yet media companies, supermarket chains and publishers backed him, loved him and allowed him unfettered access to Australian minds, time after time. It was not until Evans shared an image regularly used by neo-Nazis that corporate Australia decided his time in the sun was over.

On Monday, Evans shared on social media a cartoon featuring a butterfly with the black sun, or sonnenrad, on its wing. We’ve all seen that motif before. It appeared in photos Brenton Tarrant posted to the internet, on his backpack, before he murdered 51 New Zealanders in their place of worship. Heinrich Himmler decorated Wewelsburg Castle with the black sun, so it became a leitmotif for the hideous uprising of the new ultra-right.

And I believe there is no way – no way – Evans could not have known that, despite his protests. As Karl Quinn and Broede Carmody wrote this week, when Evans was asked on social media about the appearance of the black sun in the butterfly, he responded by saying: "I was waiting for someone to see that.” 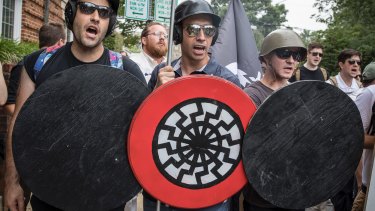 A white supremacist with the black sun on his shield at a Charlottesville rally in 2017, which turned deadly. Credit:New York Times

Rohan Miller, a marketing lecturer at the University of Sydney, wonders why it took corporate Australia so long to see Evans for what he really is. “He’s been sailing close to the wind for a long time, but mostly you could frame much of what he said as an opinion not based on any expertise beyond his experience as a chef,” Miller says. "Supporting or promoting neo-Nazism is against brand values, against corporate values, so you can’t be a spokesperson for a mainstream brand.”

So that’s it then. Neo-Nazism doesn’t sell in Australia's supermarket aisles, on its bookshelves or on television. Legendary sociologist Andrew Jakubowicz says the cartoon itself also told a story that would repel ordinary Australians. It’s the MAGA-wearing caterpillar turning into a neo-Nazi butterfly. The caterpillar says: “You've changed." The butterfly replies: “We’re supposed to.” That revealed perhaps a side of Evans even fans had not understood. He had become a creature of the dark side.

Most Viewed in Lifestyle