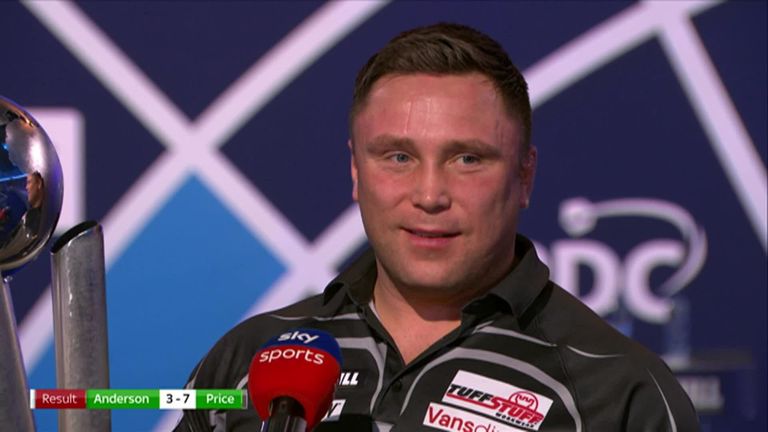 On January 1 2014, Michael van Gerwen beat Peter Wright to win his first world title and become the world No 1.

A few weeks later, a rugby player from South Wales rocked up at PDC Qualifying School without fully knowing the rules and won himself a Tour card. Seven years on and Gerwyn Price has ended MvG’s seven-year reign at the head of the rankings and lifted the World Championship trophy himself.

“If I had known the rules when I went, I probably wouldn’t have even gone,” Price told the media after his 7-3 victory over Gary Anderson at Alexandra Palace.

The greatest shame is that only a handful of PDC officials and Sky Sports presenters were in attendance to see it as Price, the former Cross Keys, Neath, Glasgow Warriors and South Wales Dragons hooker dethroned Van Gerwen to become Wales’ fifth world champion.

A deserted West Hall, usually home to a raucous crowd of 3,500, stood silent as Price claimed the biggest title of his darting career in the latest chapter of a remarkable rise for the former rugby league and union player who can now claim to be the best player on planet darts.

“I never ever dreamt this,” he added after moving the huge trophy out of the way of the photographers.

“Two years ago you could have given Michael [van Gerwen] a year off and he still would have been world no 1 so for me to come from the background I have, to pick this trophy up, I am over the moon – there are no words that can explain it.”

Massive congratulations to @Gezzyprice , from all at the keys, on the edge of our seats, #PDCWorldDartsChampion #no1 #Iceman pic.twitter.com/PaJKPewRHQ

Price pocketed the biggest prize in the sport when he pinned double five with his 12th match dart to lift the Sid Waddell Trophy to go with the £500,000 winner’s cheque, but there’s more to it than that – it’s the culmination of a sporting journey.

In October Price won the World Grand Prix, a fourth major title on his CV. The World Cup of Darts – with Jonny Clayton by his side – and the World Series of Darts Finals followed as the 35-year-old took his title tally for this truncated season to eight, more than anyone else.

In a sport that has numbers at its very core, the Iceman has made a compelling case over the last year, and perhaps longer, that he merits his position at the top of the game.

Along with Van Gerwen and defending champion Peter Wright, the world No 1 ranking was in play for all three when 96 players kicked off the World Championships on December 15. Wright was first to go, beaten in the third round by Gabriel Clemens, and then Van Gerwen followed in the quarter-finals, stunned by Dave Chisnall. 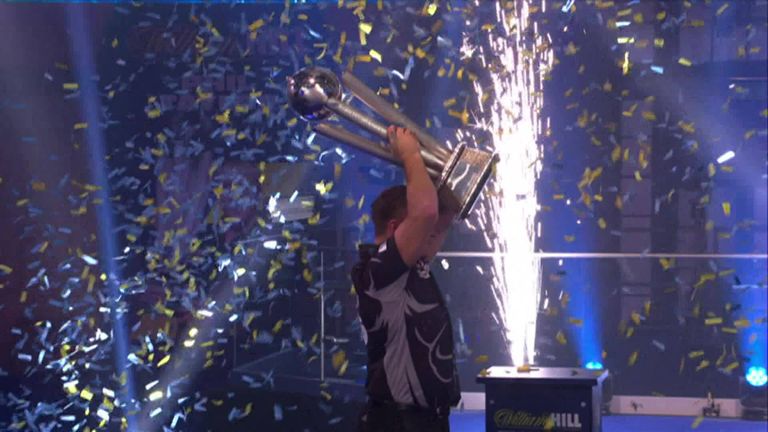 It paved the way for Price to become the sport’s 10th world No 1 and he delivered with a final performance as imperious as it became nervous, especially at the end of the match.

The Iceman had been brilliant throughout, averaging nearly 100 and hitting 75 per cent of his doubles until the winning line loomed into view. He wobbled, and admitted to being nervous before and during the match.

“Early on I felt we both felt the pressure but after that I felt I was playing well and in the middle part of the game I felt so comfortable, I felt I am playing well, I am going to win this but then towards the end it got a bit crazy.

“I had a big enough cushion to get me over the winning line, I felt like I missed millions of doubles.

“I’ve never felt pressure like that in my life. That was tough to hit that winning double, how Michael [van Gerwen], Peter [Wright] and other people make it look so easy, it’s crazy. That was tough.

In many ways, It’s easy to forget that Price is still finding his way in the game. Admittedly a very good way to the very top but he is just six full years into life as a professional darts player and not the rugby player he dreamed of being.

Price won his Tour Card with six victories in one day and a little under 12 months later he had done enough to earn his place at the World Championship for the first time.

Beaten in the first round by Wright, he watched on as Anderson claimed his first world title. That man Anderson seems to be a recurring theme at key moments in the Price journey.

A debut televised quarter-final followed in 2015 at the World Matchplay before his first titles on the Pro Tour came in 2016 as he made his way into the world’s top 32.

In 2017 he teamed up with Mark Webster to help Wales reach the final of the World Cup, a few months after he was beaten by Wright in the UK Open final. Pro Tour and European Tour titles followed before his major breakthough at the Grand Slam of Darts. 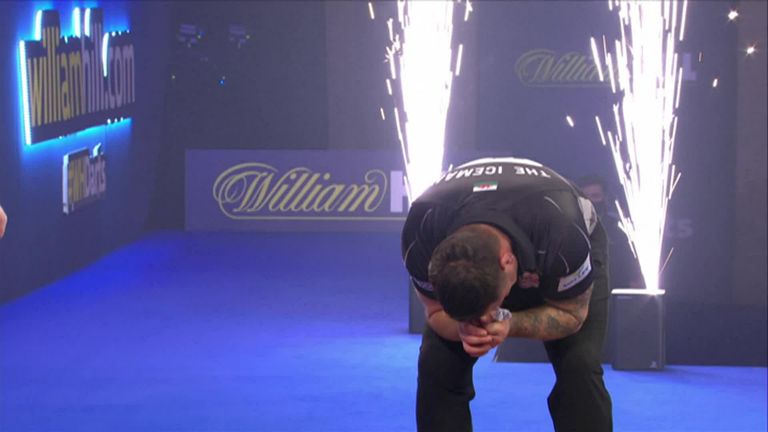 There’s a neat symmetry to Price’s rise. His victory over Anderson in November 2018 at the Grand Slam of Darts was not only one of the sport’s most controversial matches, it was also the first major title and it was there he first spoke about becoming the sport’s number one.

The matter took the Darts Regulation Authority some months to resolve. Price and Anderson were involved in several coming togethers, while the animosity on the stage was visible for all to see.

The upshot was a suspended ban and a £20,000 fine, ultimately halved on appeal, having been found by an independent panel to have resorted to gamesmanship.

Sunday night’s victory over the Scot made good on that promise, even if Price admitted afterwards that it was only this past year that he felt the world No 1 spot was actually possible – there’s no doubt that a winning machine has been created.

Price is also a poster boy for the sport and its structure. As PDC chairman Barry Hearn maintains, if you are good enough and work hard enough the opportunities are there. Price bypassed the Challenge and Development Tours due to his Q-School success and a remarkably quick adjustment to life on the Pro Tour.

It is no surprise there is passion when he flexes a bicep and screams ‘Come On’, screams that have become quite something in the crowdless arenas of the current ‘new normal’.

Just a few months ago the Welshman admitted he was not a fan of the fake crowd noise and the lack of spectators – not just because he has been used to being booed – he feeds off the emotion of the crowd.

It’s that sporting pedigree, honed in the front rows of Welsh rugby, that maybe sets him apart from so many of his darting contemporaries.

There are not many harsher places to hone a competitive sporting edge than the front row of a scrum. It’s a will to win that perhaps only Van Gerwen can match and the pair’s rivalry looks like being the sport’s next must-watch contest.

There had been signs that the crowds were beginning to turn in the Iceman’s favour, the boos are not as commonplace and while he may not be quite a crowd favourite, he is certainly no longer the pantomime villain of two years ago. 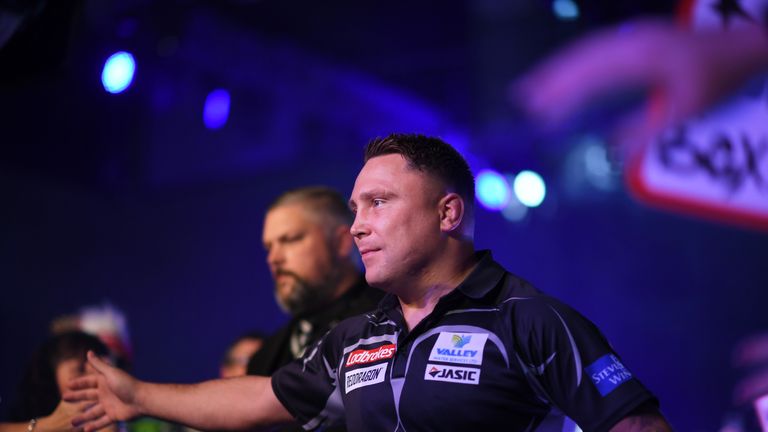 There was a long pause when he was asked by the PDC’s Dan Dawson if he would finally admit that he’s better at darts than rugby.

“I don’t know! Early on in my rugby career I was good but I bombed a few opportunities, but I think I might be a decent player now. The way I played this year I think I deserve the trophy, I deserve to be the number one but the pressure starts now – if I never win it again it doesn’t really matter.”

It turns out, the player who first turned up to fill in some time on a Friday night with his friends is quite handy. From pub darts to Superleague darts and now the highest echelons of the game, Price is going to take some stopping if his meteoric rise is anything to go by.

In seven years he has won 18 titles and climbed to the very top of the game. It’s a testament to his hard work, unwavering will to win and no little skill.

Watch full coverage of every night of the Premier League on Sky Sports, and stick with us through the year as we bring you news, interviews and more from the darting world.