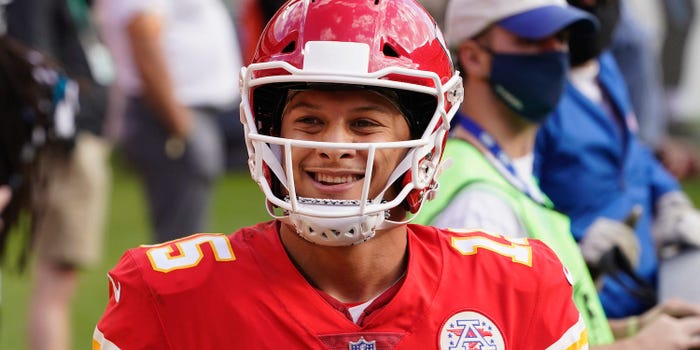 Lost in the MVP hype for Russell Wilson and Aaron Rodgers this season has been Patrick Mahomes quietly storming through the NFL.

On Sunday, Mahomes completed 30-of-45 passes for 372 yards and 4 touchdowns, with no interceptions, to help the Kansas City Chiefs beat the Carolina Panthers 33-31.

In the process, Mahomes became the quickest player to 100 touchdowns in NFL history. He has thrown 9 touchdowns over his last two games, and is on pace for a 4,700-yard, 44-touchdown, 2-interception season. No player has ever had a season with over 4,500 yards, 40 touchdowns, and fewer than 5 interceptions.

And while statistically, Mahomes is racking up impressive accomplishments, teammates see growth in other areas.

"The year that he threw the 50 touchdowns, he was amazing, obviously," Chiefs wide receiver Tyreek Hill told The Athletic's Nate Taylor of Mahomes' 2018 season. "But this year, it's like he's seeing things differently. He's doing more no-looks. He's reading the defense better. He's changing the play. He's just great. He has gotten a lot better."

Of course, Mahomes has weapons at his disposal that not all others have, whether it's the speed of Hill, a big, athletic target in Travis Kelce, and the play-calling genoius of Andy Reid and offensive coordinator Eric Bienemy.

All of those factors, plus Mahomes' arm talent, makes the Chiefs offense look almost too easy. Take this unusual pre-snap motion for a touchdown, for example:

Reid told reporters after the game that Mahomes had been "messing" around with it in recent weeks, so Reid decided to put in the game plan.

"The last three weeks Pat's been messing around with it," Reid said. "So I told him, I said, 'We're going to put it in,' and he looked at me like I was crazy. But he had been doing it and it looked good, so, if I said, 'If it looks good, let's try it,' and so we tried it. He goes down there during special teams and he was messing around with a couple things, so we put it in — and it worked."

"I think I just understand the game more … I feel like I was playing better last year than I did the year before," Mahomes told reporters on Sunday, adding: "But every year I'm more comfortable within the offense, I'm more comfortable reading the defenses and understanding where the ball is going to go even before the snap of the ball.''

"You're seeing the best of him right now,'' Chiefs coach Andy Reid said. "And some of it you might not see, the things he does behind the scenes, whether it's the look-offs and [other] small, subtle things.

"We have full confidence that he'll do what he needs to do to win a game. That's how he operates.''

The Chiefs are 8-1 heading into their bye. They do face a difficult schedule, but no team has been more complete, including the 8-0 Pittsburgh Steelers.

If Mahomes keeps up this level of play, and the Chiefs continue to look like Super Bowl favorites, the 25-year-old is likely to walk into his second MVP in three years.