As you will have noted on the front page, tonight before the Wallabies' Test against Argentina at Bankwest Stadium, Australia will begin what will hopefully become a wonderful tradition. A young singer from the Newtown High School of the Performing Arts, Olivia Fox, will sing the Australian National Anthem in Eora language and then in English, joined by the Wallabies who will be wearing their magnificent First Nations jersey. Just like the All Blacks do! 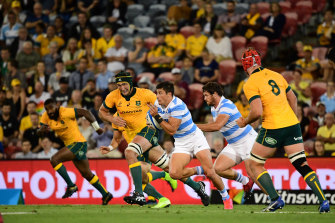 The Wallabies resume hostilities with Argentina at Bankwest Stadium on Saturday, mere miles from where the storied Indigenous warrior Pemulwuy met his demise.Credit:Stuart Walmsley/Rugby AU Media

(And the bastards still have his head. Don’t get me started.)

The point is, the fact that 219 years later, not far from where this barbarity occurred, white men and black men in the one team can be singing the national anthem in two languages – one of which he would have understood – with the support of the crowd, is really something. And an Indigenous woman leading the singing!

As far as I know, I've never met David Campbell, SC, the barrister for Jack de Belin in the current rape case. He is clearly a good lawyer, doing his best for his client: including making comments in the public domain outside the courtroom. Like most barristers of his calibre, he will likely work from “chambers”, and be supported by a variety of office staff and likely more junior lawyers. To succeed, Campbell and his cohort need to sustain the same fine reputation they currently enjoy as professionals of high character, calibre and integrity.

So here is my honest question to you, Mr Campbell, SC. 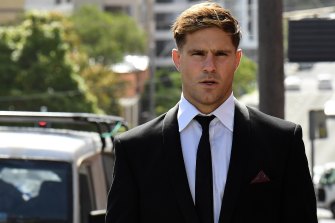 If, God forbid, one of your office staff or junior lawyers faced serious rape charges and had comported themselves in a manner that it caused a thousand headlines and lednews bulletins for months on end, would they or would they not stay working for you, representing you, turning up Monday to Friday just as they have always done?

I am serious. If they didn’t resign, and you didn’t dismiss them, would you still be happy for them to turn up week after week, doing business as usual? And remember, they would be telling everyone, "Yes, I do look familiar, because you’ve seen me on the evening news, facing the rape charges, but I am here now doing some work for David Campbell, SC."

Is that how it would work, sir?

Or, one way or another, would your employee facing such serious charges – at the very least – be stood down until such times as the judicial process had completed its course?

That may be with or without pay but surely we can agree on either the written or unwritten rule that your active employment with these chambers is dependent on comporting yourself in a manner that does not bring these entire chambers into disrepute. This is surely all fairly straightforward for you, as with all employers? At this organisation, facing such charges, the chances my column would appear on the Saturday and me being on the tube on the Sunday morning are zero.

And yet, Mr Campbell, you are insistent that in the case of de Belin, the NRL has got it wrong. That despite your client generating the worst publicity the game has suffered in a generation – which is saying something – the NRL had no right, no reason to stand him down with their "no-fault" rule for so long?

"That's a vice of the rule, isn't it?" you told the Herald on Wednesday. "The absence of some discretionary element in the rule is highlighted by this case because somebody could be held out for five years. There needs to be some discretionary amelioration with the harshness of the rule." 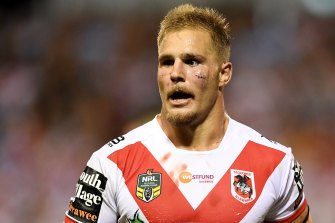 Jack de Belin has not played for the Dragons since 2018.Credit:NRL Photos

After everything that has come out of this court case in recent days and weeks, this is the time the NRL should say, "OK, come back to work"?

You cannot, surely, be serious. Is that really how it would work in your chambers?

Whether or not de Belin – and, in a separate case, Jarryd Hayne – committed rape is indeed for the courts to decide. But that they both behaved appallingly is beyond question just based on their own testimony of what occurred on the nights in question. They were employees in an organisation that depends on public popularity to survive. They behaved in a manner that completely trashed that reputation. The NRL has every right to invoke the no-fault stand-down rule and its wisdom has been proved time and again.

I repeat: it will be for the courts to decide their guilt or innocence, and then to a standard of proof beyond reasonable doubt. But in neither case here are we looking at a situation of whether it was them or the butler that behaved appallingly. They did. That is known. No other organisation I know of would sustain their employees doing that. Why on earth should the NRL?

November 17: Wests Tigers chairman Lee Hagipantelis re Josh Aloiai wanting to leave: “As far as we’re concerned he can mow the lawns at Leichhardt and Campbelltown and paint the sheds at Concord.”

“He’s a contracted employee at the Wests Tigers for 2021 and under the terms of his employment he’ll be remaining at the club.” 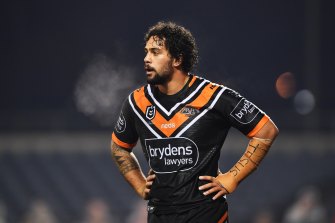 November 29: West Tigers statement: “Wests Tigers have also confirmed that Josh Aloiai will depart the club effective immediately after being released from the final year of his contract. As part of the release, Wests Tigers have also agreed to an undisclosed commercial settlement with Josh’s new club.” That bloody showed him!

“He was trying to please her sexually.” Phillip Boulten, SC, in his closing address, as he essays to defend Jarryd Hayne from the charge of rape.

The woman at the centre of the – quite separate – Jack de Belin rape trial gives her sworn account of what happened on the night in question when she went back to an apartment with de Belin and his co-accused, Shellharbour Sharks player Callan Sinclair: “They were holding my body up, I was dead inside, I was numb, I was crying, and that's all I was doing.” On Monday the jury came back with their foreman announcing they had been unable to reach a verdict. A new trial has been set for early next year.

Shane Warne making a quip after David Warner was injured in the one-dayers: “Maybe they’ll interview Will Pucovski and say who do you want to bat with?” 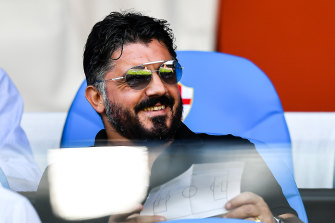 Candice Warner to Lawrence Mooney on Triple M, on her husband’s groin strain: “We only sort of reunited after four months apart, a couple of days prior … and everyone’s like, ‘What have you done to him?’ I’m like, ‘It wasn’t me! It was not me’ . . .” Then she thought about it for a moment and added, “Sorry, Australia.”

Gennaro Gattuso, the current coach of Diego Maradona's former club Napoli: “It was a great loss, but Diego will never die. He is a legend, from another planet.”

Wales' Health Minister Vaughan Gething in response: “Good way to annoy 3 m+ potential customers.” BA said it had “unintentionally strayed offside” and was very, very sorry . . . so there. In fact, so . . . there, there.

Channel Seven CEO James Warburton unhappy with Cricket Australia: “It's a shame that the cricket administration have kept their head in the sand. They really don't value us as a broadcaster, preferring to outperform to the BCCI [Board of Control for Cricket in India], who they are terrified of.”

Naples funeral director Gennaro Tammaro, urging the city to commission and erect a statue of, and monument to, Maradona: “Besides him being an iconic figure, losing Maradona is – for Neapolitans – like losing a member of the family. As soon as we heard the news, we immediately resolved to give the city a place where we can remember him and – why not? – cry.”

Tottenham Hotspur manager Jose Mourinho downplaying their league ambitions: “We're not even in the [title] race so we're not a horse. We're a pony.”

Daniel Ricciardo after fellow Formula One driver Romain Grosjean’s fiery Bahrain Grand Prix crash: “I’m disgusted and disappointed with Formula One for showing or choosing the way to show it as they did, and broadcast replays after replays after replays of the fire, and his car split in half. And then, like that’s not enough, they go to his onboard. Why do we need to see this? We’re competing again in an hour. His family has to keep watching that.”

Romain Grosjean’s wife Marion on his crash: “Obviously, I didn't sleep last night and, to be honest, I'm not sure what to write as words don't come easily . . . What image to keep from yesterday? That of the flames? Of him being held by the track workers? The wreckage of his car?”

Jennifer Shahade, women’s program director of the US Chess Federation on the boom in interest from females due to the The Queen’s Gambit: “I notice a lot of them are coming back into the game and getting that confidence because the show depicts a woman who is able to find herself through the game, so I think that’s very appealing. And also the sense of community.”

Teenager Sam Elliston-Buckley of Hobart side Greater Northern Raiders on running out Tim Paine in Tasmanian Grade cricket: “I don't think I'm that good at cricket to sledge him, so I just let it go.”

Peter V'landys on NRL players breaking their contract: “I've always said we're going to act on behalf of the fans and we always will because at the end of the day, if you don't have fans, you don't have viewers and you don't have people paying admission, in the end you don't have wages. It comes back to what aggravates the fans, and it's been an aggravation for quite a while.”

Sarah Fuller on playing college football for Vanderbilt as a kicker: “I know there are probably people out there who are like ‘She doesn't even play football’. But I was the right person for the job… I think I had all the right skills and everything to be myself, to represent my family well, to represent the school well, and I think that was enough.”

Team of the Week

Wallabies. Play the Pumas tonight at Parramatta, for their last outing of the year.

James Tedesco. Looks set to sign with the Roosters, for another three years, for a lazy $3.3 million.

Sarah Fuller. The 21-year-old from Vanderbilt University became the first woman to play in a major college football game – as a place-kicker. On the back of her uniform she had the words, Play Like a Girl.

Mick Schumacher. Son of Michael will race in Formula 1 next season after Haas announced him as part of their new-look driver line-up for 2021.