More than 230 domestic violence services are asking the nation’s women’s safety ministers to give them a decisive funding boost as they face a massive increase in demand.

The Morrison government is planning to widen the scope of the national blueprint to reduce violence against women, with Minister for Women’s Safety Anne Ruston foreshadowing a much more ambitious plan, set to start in 2022. 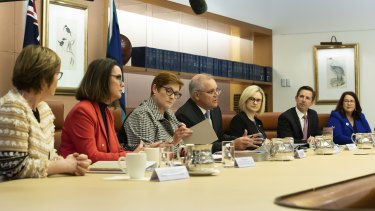 Domestic violence services in NSW and Queensland have written to the Commonwealth and state governments asking that a $150 million funding injection given during the pandemic be renewed as a matter of urgency.

They say the lockdowns and recession led to increased demand from domestic violence victims that has not subsided. As well, the renewed spotlight on sexual abuse in the news and from government campaigns has also led to a demand for their services from adult and child survivors of family, domestic and sexual violence.

Hayley Foster, head of Women’s Safety NSW, says violence against women is at a crisis point.

“We need a more ambitious national plan to address this epidemic, but we can’t wait until 2022 to act. Hundreds of thousands of women and children need help now,” she said. “We cannot turn our backs on them when they need us most.”

Senator Ruston is taking the renewed plan to a meeting with her state counterparts on Wednesday.

Victorian Minister for Women Gabrielle Williams will urge her colleagues to increase funding for specialist women’s legal services, among other initiatives.

“We have an opportunity for real, lasting progress for women’s safety and we look forward to working closely with the taskforce and the federal government to this end – because women have waited long enough and deserve nothing less,” she told the Herald and The Age.

NSW Attorney-General Mark Speakman said he was looking forward to discussing further ways to prevent and respond to the scourge of domestic and family violence.

“[NSW is] resolved in our efforts to change community attitudes and behaviours which drive violence and harassment towards women,” he said.

The meeting’s main focus was the government’s imminent response to Sex Discrimination Commissioner Kate Jenkins’ landmark report on workplace sexual harassment. The [email protected] report made 55 recommendations aimed at shifting from a complaints-based system that puts a heavy burden on victims to one where employers must proactively stamp out sexual harassment and create safe workplaces.