Stephen Curry and his wife have three children, the oldest of whom is still a few months shy of her 8th birthday. Last week, Drew Brees donated $5 million to COVID-19 relief efforts in Louisiana. Karl-Anthony Towns’ mother got so sick from the novel coronavirus she had to be put on a ventilator.

I feel the need to point out these things as a reminder that the athletes who play the games we love are also human beings, something that some folks seem to have forgotten.

In the past few days, ideas have circulated on how sports could return while the United States is still on lockdown or the spread of COVID-19 remains a real threat. The NBA is reportedly considering holding a playoff tournament in Las Vegas so teams don’t have to travel. The English Premier League has floated the idea of isolating teams in sparsely populated areas of the country and playing games behind closed doors, and Pro Football Talk’s Mike Florio wondered why the NFL couldn’t do the same thing. 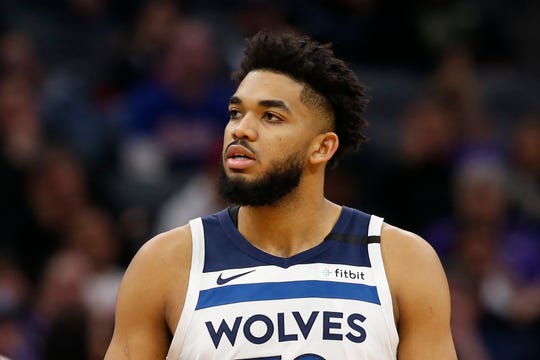 Aside from the logistical impossibility of these ideas – look up those Biosphere experiments and see how they went – the idea of putting athletes in harm’s way simply because the rest of us are bored and want a distraction, or because their overlords are worried about losing money, is, frankly, sickening.

The Hunger Games was a movie, not an aspiration. These “athletes” are not objects for your amusement or tools for your entertainment. They are people. Extraordinarily gifted athletically, yes, but with families and friends and all the same worries, fears and hopes that the rest of us have.

HOW COULD SPORTS RESUME? The good, bad and downright crazy ideas

DAN WOLKEN: Let's burst the idea of playing the remainder of the NBA season in a bubble

“I understand people are always looking for an escape, especially in a time like this. People are looking for anything, whether it’s two or three hours, to take their minds off the absolute craziness our world’s become in the last month or so,” said Eric Winston, a former offensive tackle and president of the NFL Players Association.

“But it never does cease to amaze me how quickly people are willing to say, 'It’s not safe for us to go outside, but you guys definitely run into each other.’”

Our view of athletes as commodities is a reflection of a broken system. Fantasy sports have long been blamed for reducing athletes to points and yardage, but even that is simply an extension of where sports fit in our society.

Whether someone is described as an NFL player, a professional soccer player or a college basketball player, they are all athletic labor in a capitalistic system, said Nathan Kalman-Lamb, who teaches on labor, social equity and sport at Duke. Their whole purpose, he said, is to produce a “commodity spectacle” that can be sold to the general public.

Crass as that might sound, think about it. It’s not the sports themselves that drive our interest, Kalman-Lamb said, or we’d all be as enthralled watching a seventh-grade team play as we are the Los Angeles Lakers. It’s the meaning we derive from them.

“Most people experience isolation, exploitation and alienation in their lives. They’re looking for things that make them desire meaning,” said Kalman-Lamb, who also wrote "Game Misconduct: Injury, Fandom and the Business of Sport."

“Fans are coming to sport with a desperate thirst for some kind of meaning that’s lacking in their everyday lives. For that to be possible, sport has to seem like it matters,” Kalman-Lamb said. “They don’t go out to watch me play in the park.”

Sports are our escape, and we don’t take kindly to anything that poses a threat to it. It’s why we turn on beloved players when they leave our favorite teams. It's why fans so rarely side with players in contract disputes, their own or a league's.

During the 2011 NFL lockout, for example, Winston said he was surprised when fans didn’t seem bothered by players’ health concerns.

“It wasn’t that they were hateful or anything like that. It was just they didn’t care,” Winston said. “These people like cheering for us, but it’s not necessarily that they really care about us.”

And before you protest, citing your undying love for Tom Brady or Khalil Mack, remember that we know the dangers of repetitive head trauma and the long-term damage it will cause some players. Yet the NFL continues to be wildly popular, our enduring national pastime.

When you look at it that way, it’s not hard to see why owners, league officials and, yes, even some fans, would think it’s OK to put players at risk for the sake of entertainment. Entertainment that can be slickly packaged and sold, of course.

“If we put players back out there, whether with no fans or whatever else, fans are able to compartmentalize the harm in order to extract the meaning and whatever else,” Kalman-Lamb said.

Regardless of their out-sized role in our lives, sports are not a matter of life and death. Never has that been more true than now.