We already knew it, but the NCAA’s announcement Monday that its entire men’s basketball tournament will be held in a single city in March of 2021 — likely Indianapolis — tells us something pretty important about the state of things in college athletics.

Come COVID-19 hell or high water, March Madness will be played next spring.

It doesn’t have to be a normal NCAA Tournament or Final Four. It doesn’t necessarily have to have fans in the stands. Heck, it doesn’t even really need to be preceded by much of a regular season — and more on that in a moment.

The whole point was spelled out in the last line of the NCAA’s news release: “CBS Sports and Turner Sports will continue to distribute all 67 games of the tournament across TBS, CBS, TNT and truTV and their digital platforms.”

A sentence worth $850 million dollars if there ever was one. 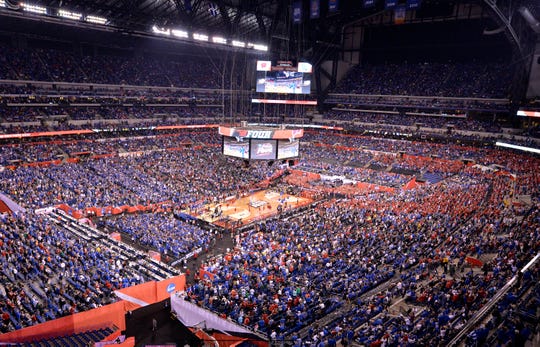 Lucas Oil Stadium in Indianapolis as it was for the 2015 Final Four. Under a proposal from the NCAA, it would be the centerpiece of a men's March Madness where all 68 teams would play in Indy. (Photo: Jamie Rhodes, USA TODAY Sports)

With a $270 million insurance policy recouping some of that money, the NCAA could survive canceling one year of March Madness, the event that accounts for almost the entire lot of its $1.1 billion in annual revenue. It can’t survive a second.

In a world that revolves around COVID-19, nothing is guaranteed. But the NCAA can’t afford to leave much to chance, so this is the only solution that makes sense.

“We’ve seen that the pandemic has been managed at the state, county and city level with local health authorities,” senior vice president of basketball Dan Gavitt said in an interview posted to the NCAA’s Web site. “That’s almost certainly going to be the case even in March and April and trying to run an event of 68 teams, 67 games over three weeks in a safe and responsible way really needs to be managed in a much more controlled singular environment.”

It won’t exactly be a bubble, but at least it’s a plan. And it’s one that removes a lot of the variables that could potentially derail an NCAA Tournament being played in an environment where COVID-19 infection rates are still high nationally.

Indianapolis, where the NCAA is headquartered, has more than 7,700 hotel rooms in the downtown area. It has Lucas Oil Stadium, where the Final Four was originally scheduled to be held in 2021, and Bankers Life Fieldhouse as potentially primary venues. You’ve got college basketball arenas at Butler University and IUPUI along with several large high school gyms in the metropolitan area that would be perfectly acceptable.

The NCAA says it continues discussions with other cities if things fall through with Indianapolis, but clearly the preference is to keep things close to home. The key takeaway, though, is that a normal NCAA Tournament would be far more difficult to pull off.

Rather than try to manage the logistics of eight first-weekend sites and four regional sites around the country, the NCAA can control everything from food service to transportation to testing from one centralized location. The teams that continue to advance in the tournament stay, the losers go home.

It doesn’t guarantee a foolproof tournament or that every player will test negative for three weeks. But given the alternative of having teams fly all over the country and potentially to multiple cities where infection rates and local health protocols may be vastly different, it sure seems like a smart way to put more elements under the NCAA’s control.

“We coalesced around a decision that we were not going to be able to host the tournament in 13 different sites,” Kentucky athletics director and NCAA basketball committee chairperson Mitch Barnhart said. “Through the pandemic, it was unreasonable to expect that.” 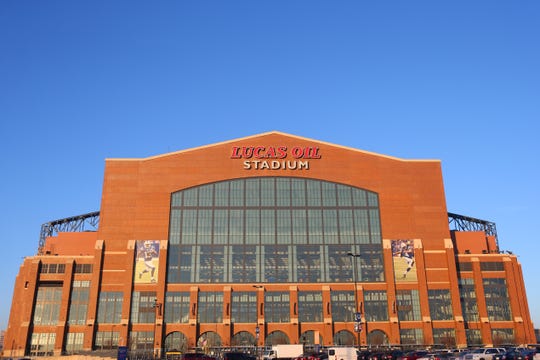 The NCAA may not be particularly effective at a lot of things, but it knows how to put on events. This is going to work because the NCAA has been watching the COVID-19 trends for months and can’t afford to leave anything to chance.

Which is exactly the opposite of how college basketball at large is going to try to operate from now until the beginning of this tournament.

A few months ago, there was a lot of talk about creative ideas for how to get games in or conferences trying to build semi-bubbles in one location where teams would play a bunch of games in a short period of time. Though a few multi-team events for non-conference games are still on track, a bunch of others have fallen apart or are shifting in real time. Everything seems rushed and haphazard.

Meanwhile, conferences are putting out schedules, but there aren’t a lot of open dates to account for games being postponed due to positive tests. Several schools around the country have halted practice, and coaches are resigned to the likelihood that at some point they’ll have to shut down for a couple weeks and miss several games.

If the NCAA doesn’t move the tournament back to make up those games — something that clearly isn’t the NCAA’s preference but wasn’t completely ruled out by Gavitt — it’s certainly possible some teams could head into Selection Sunday having played fewer than 20 games.

But that’s not the NCAA’s problem or its responsibility. As long as there are 68 teams available, they’ll live with that.

Ultimately, the only thing that matters for the short and long-term future of the NCAA is collecting that big check from CBS and Turner. By launching its plans for the tournament now, the NCAA is letting everyone know its survival is at stake.