One in 25 properties in Australia will be effectively uninsurable by 2030 due to worsening extreme weather caused by climate change according to a study released by the Climate Council.

Flooding from rivers was found to be the most common risk to Australian properties, followed by bushfire and then coastal inundation from sea level rise.

The study conducted by Climate Valuation, a company that provides climate risk analysis to property owners, includes a map that allows readers to view data on the risk under different greenhouse gas emissions scenarios to their suburb, electorate or local government area for the years 2030, 2050 and 2100.

Climate Council chief executive Amanda McKenzie said the data showed that Australia was not properly prepared for the effects of climate change.

“I was horrified when I saw the data, just how quickly things are changing and the scale of the impact that is occurring in Australia right now,” she said. 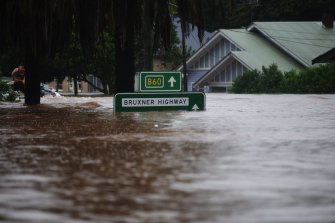 Lismore was hit by severe flooding in February and March of 2022.Credit:Elise Derwin

McKenzie said the findings were evidence that a comprehensive risk assessment needed to be undertaken of the most vulnerable communities, and that state and federal governments must consider policy to assist some people to move.

Lismore City councillor Elly Bird said some residents now recovering from two major floods did want assistance to leave, while others wanted governments to help them build homes that could survive severe flooding.

“The February 28 flood was like nothing we have ever lived through before. Lismore is a flood city and flooding is part of our DNA,” she said. “When we prepared for that flood, we prepared for 12 metres. We would have bounced back from that quite well. But what we got was 14.4. And the scale and the devastation of that event was like nothing we have ever experienced.”

“I have spoken to people who have lived here for their whole lives, local builders, born and raised here and they say this was different,” Bird said. “This is different. We have to respond differently. We have to think differently, and we have to make different plans off the back of this.”

Climate Valuation considers properties to be effectively uninsurable – a point where insurance becomes unavailable or too expensive – when the annual cost of extreme weather related damage reaches 1 per cent of the replacement cost of the property. It presumes replacement cost to be $314,000, which it says is a conservative average.

It built a “climate risk engine” which combined data from local meteorological stations with information about the specific location, such as flood mapping and depths, elevation above sea level, tides and waves, soil type, and forest cover; and data on the assumed building at that address, such as age, construction materials and design.

Along with the 520,000 properties to become effectively uninsurable by 2030, a further one in 10 will reach the “medium risk” classification by 2030, with annual average damage costs equalling 0.2 per cent or more of the property replacement cost.

The Climate Council is calling on Australia to reduce its carbon emissions by 75 per cent by 2030, about three times the current level of commitment.

A spokeswoman for the Insurance Council of Australia said at present no area of Australia was uninsurable, although there were some locations with clear affordability and availability concerns.

“Insurance prices risk, and that means that for those in flood-prone or cyclone-prone locations cover can be costly,” she said.

In late February, the insurance council called on the next federal government to increase its investment in resilience measures to protect homes from flood and cyclones to $200 million a year, which it says should be matched by the states and territories in line with a 2014 Productivity Commission recommendation.

A guide to the environment, what’s happening to it, what’s being done about it and what it means for the future. Sign up to our fortnightly Environment newsletter here.