Kimberly Daniels is at the Tokyo Olympics to judge the women’s canoeing slalom. Her daughter Haley is there to represent Canada in an event newly introduced at the Games. 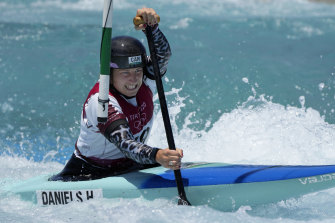 Daniels, who was a canoe slalom gate judge in Rio in 2016, has attracted attention for another reason. She transitioned to a transgender woman since Rio where she judged as a man, Duncan.

Daniels wrote for Olympics.ca in 2020 that she graduated from parent volunteer many years ago to certified official.

“As her dad, I have been committed to supporting her sport as a volunteer.

“In 2009 I became a certified international technical official with the International Canoe Federation (ICF). Since then, I have been active as an official at World Cups, World Championships, Pan American Games and the Olympic Games,” she wrote.

According to CBC Canada, Haley has been competing on the ICF world circuit since 2009. Haley qualified for the Tokyo Olympics at a race in Krakow, Poland, on May 27, the outlet reported.

The Canoe Federation put out a video a few years ago that explains how the sport’s scoring generally works and what judges look for.

Daniels told CBC: “I’ve been going to different international events [for over 15 years], some of which Haley’s been at, some where she hasn’t.

“And my role [at the Olympics] is on the course, signalling different gates and working with an amazing team of international technical officials with the International Confederation.”

The Games official website said “parents are allowed to be judges during canoe slalom competition, with the system designed to avoid controversy in such situations.”

Hayley said there were three other judges who “judge the exact same gates from different vantage points and then there’s also a video judge so if she tried to put it in my favour there would be four other judges that would rule differently.

“My mom and dad have always been my biggest supporters, I’m focusing on my job and my dad’s focusing on hers – then we can celebrate when we get home next week.”

Kimberly Daniels had planned on coming out as a woman after the Olympics, but the pandemic-induced delay to the start of the Games meant announcing her transition earlier with her daughter’s support.

“I have known since the summer of 2019 that I would be a gate judge at the Tokyo 2020 Olympic Games.

“For us, 2021 is going to be a story about gender equality. It will be the first time for women’s canoe events on the Olympic program and it looks like I could be the first transgender official at the Olympic Games,” Daniels wrote in 2020.

Back then she said Haley was training hard to qualify for an Olympic spot and she would “be proudly filling Duncan’s role as a canoe slalom official as Kimberly”.

“My daughter has been fighting for gender equality for most of her paddling career,” Daniels told AP on Tuesday before she headed back to the task at hand – judging a men’s canoe competition on the white-water slalom course.

Hayley said: “My dad was not able to live her authentic self for 60 years, 65 years, actually. I think her goals haven’t been to make history, her goal was just to be herself.”

Hayle will compete on Wednesday in a large field that includes Australia’s Jessica Fox who’s competing in both K1 and C1.