In a cavernous room above the banks of the Thames in London, two very different artworks face each other on opposite walls.

One, Algernon Talmage’s The Founding of Australia 1788, offers a romanticised depiction of white settlement in Sydney Cove, with not a hint of the continent’s ancient Indigenous culture or the violence perpetrated by British settlers.

The other is a correction to that sanitised version of events: Gordon Bennett’s Possession Island (Abstraction), a provocative work featuring Captain Cook which overlays black footprints and the colours of the Aboriginal flag to invite a re-reading of the mythology enjoyed by colonial history. 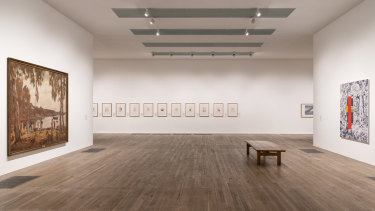 Room with two very different views at the Tate Modern. On the left, Algernon Talmage’s The Founding of Australia 1788. On the right, Gordon Bennett’s Possession Island (Abstraction).Credit:Joe Humphrys

For someone sitting on a wooden bench between the two pieces, the juxtaposition is confronting – a key aim of a new Tate Modern exhibition A Year in Art: Australia in 1992, which explores the debate over Aboriginal and Torres Strait Islander land rights before and after the High Court’s landmark 1992 Mabo decision.

The timing couldn’t be better given the wrangling in Australia over constitutional recognition and the global reckoning over racial discrimination.

“Artists have been talking about these issues for a really, really long time,” says Tamsin Hong, an assistant creator at the Tate Modern, who hails from Australia.

“The Mabo decision stirred up a national debate over land rights and a lot of these artists have showed how that big event did not resolve all these issues. I really think what we are looking at right now is a continuation of that conversation and debate.”

Many of the works have been acquired by the Tate via a 2015 grant from Qantas. But some, such as Up in the Sky by photographer and filmmaker Tracey Moffatt, have been in storage since their purchase in the late 1990s and have never been displayed until now. Eight other pieces are jointly owned by Tate and Australia’s Museum of Contemporary Art.

Hong and international art curator Valentina Ravaglia sought to balance the exhibition with artists whose work proudly showcases Aboriginal culture in contemporary society, and those who seek to highlight the catastrophic impacts of dispossession and discrimination. 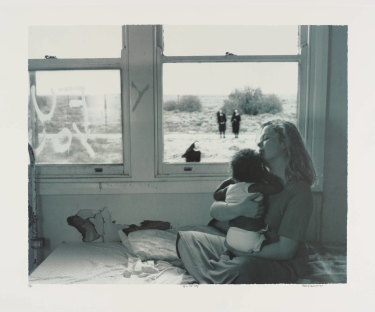 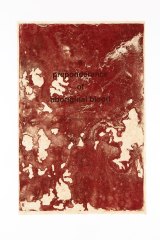 Hong and Ravaglia says the exhibition is significant for the Tate because it represents a fresh plank in its strategy to continually “question the canon”.

“The accusations of rewriting history need to be looked at closely,” Ravaglia says. “What institutions like the Tate Modern have been trying to do is bring up the other side of history which has not been told. That’s not rewriting, it is just filling the gaps.

“It needs to be understood that there remains so many stories, so many narratives, that have been completely and wilfully buried. They need to be brought up again.”

A Year in Art: Australia in 1992 is the second in the Tate’s series exploring the intersection between art and momentous events. The first focused on how art was used as a protest following the 1973 coup in Chile.

The new exhibition opens on June 8 and runs until mid-2022.