Long ago, when dinosaurs ruled the earth, the rock and pop landscapes were different. Odd was not so odd as it is now. Groups like Devo and the B-52’s were huge, and even the screaming British lads with horrible haircuts wore five-inch heels and make-up. 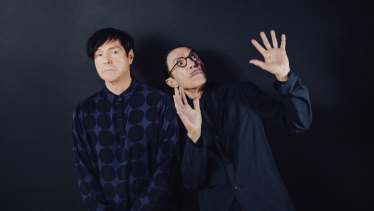 Sparks have always stood out as premier league weird.Credit:Anna Webber

There was plenty of odd, and then there was Sparks. Even then, they stood out as premier league weird – “there’s these two brothers, right, and one of them has a Hitler moustache and always wears a tie, and the other one looks like an extra from a vampire movie…”

Who but the fans knew they were still going, more than 50 years after their first recordings? Those fans are fanatical and mostly in Europe, where an album periodically breaks into the charts in western Germany or the funkier parts of Norfolk for long enough that Ron and Russell Mael, the Sparks brothers, tour again.

So here we have Edgar Wright’s thoroughly entertaining, if somewhat rambling, documentary about the brothers, and it’s just as odd as you might hope but funnier than expected. It turns out Ron and Russell are sharp, witty, self-aware, deeply committed and extremely hard-working.

They live near each other in Los Angeles, getting together most days to work on their latest album, of which there are now 25.

They are somewhat mysterious, but why not? A little mystery helps them keep sane in the music industry – although they might dispute that they are even part of that industry.

They are careful to distance themselves from the mainstream of anything. They are men of habit, attending the same coffee shop each morning, sometimes at separate tables. No-one knows if they are married, single, divorced – although one of their former collaborators does out them as heterosexual, which probably made headlines in a German pop ’zine somewhere.

Wright is not sure how to structure their story, so he goes through the albums one by one, showing clips of their songs, with comments from a wide group of admirers. Jonathan Ross says they look like they’ve been let out on day-release, but the most perceptive are the many women they have employed as musicians (particularly as drummers) and managers over the years. Those who have played with them for long periods seems to love them, which is a good sign.

Has anyone survived in pop as long as Sparks? Absolutely no-one has done it their way, keeping to themselves, working constantly, evolving and changing and influencing thousands of other musicians along the way. It’s not supposed to be possible to survive like that – yet they’ve done it. Just remarkable.

Find out the next TV, streaming series and movies to add to your must-sees. Get The Watchlist delivered every Thursday.