Australia's imperiled culture and entertainment sectors have made a direct and united appeal to Prime Minister Scott Morrison for a billion-dollar rescue package to save the nation's creative life from permanent shutdown.

In a strongly-worded open letter, more than 100 bodies representing authors, screen producers and writers, dancers, Indigenous artists, librarians and musicians warned many concert venues, festivals and playhouses in regional towns and suburbs were unlikely to reopen once the nation had weathered the COVID-19 pandemic. 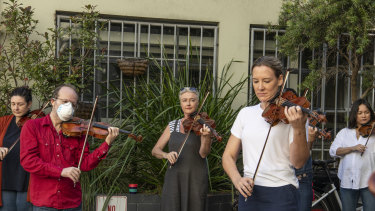 Unable to play for their supper: casual musicians of Opera Australia.Credit:Louise Kennerley

"Each passing day means the permanent closure of another bookshop, regional theatre, gallery, live music venue, production or festival, and with them the knowledge and infrastructures that have been built over many years," the letter said.

"The risk for all Australians is that they will never open again. Whole centres, towns and suburbs risk losing any cultural fabric that remains."

The statement, supported by all major peak bodies, grew out of rising frustration that the once-thriving sectors – foundational to tourism and regional economic health – had been overlooked for targeted support.

Late on Friday the Prime Minister foreshadowed "hibernation measures" for some businesses, giving hope to many in the arts sector.

Esther Anatolitis, executive director of the National Association for the Visual Arts, said it was hoped these measures would involve wage subsidies and direct payments to arts companies. "Only this can secure Australia's cultural life," she said.

As well as the Prime Minister, the open letter has been sent to Opposition Leader Anthony Albanese, Coalition and Labor frontbenchers, state and territory ministers for the arts and all capital city lord mayors.

"In the past fortnight, we have seen our self-generated income for the year vanish," the signatories said. "Work that has taken years to develop has been lost. Livelihoods are jeopardised. Businesses closed. Whether it’s a bookshop, a gallery, a live music venue, a cinema, a theatre, or dance school, Australia's cultural life is in tatters. A legacy like this will take a generation to repair."

They said the scale of loss across the cultural sector was unprecedented and devastating, with NAVA estimating many hundreds of thousands of casual artists and arts workers have already received their two weeks' notice.

Special attention was drawn by the peak groups to the "dire" circumstances of First Nations artists, particularly elders as keepers of cultural knowledge. Indigenous arts centres were sole economic drivers in some remote towns. 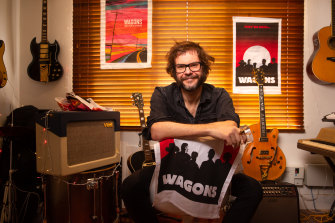 Henry Wagons is one of the many musicians who can’t perform live at the moment. Fans can support their favourite artists by purchasing merchandise online. Credit:Simon Schluter

Federal government is under pressure to broaden assistance to the arts even as the Australia Council this week scrapped grants and repurposed $5 million to support a sector suffering "catastrophic" damage from COVID-19.

Sydney Theatre Company chair Ian Narev said this week that audiences had “disappeared overnight for an indefinite period”, but also acknowledged that the demands on governments responding to the health and economic threats of COVID-19 were "extreme".

Federal Arts Minister Paul Fletcher met with his state counterparts last week to discuss how to support the arts and live entertainment industries amid nationwide cancellations.

More than 90 per cent of artists, creators, and businesses were not in receipt of public funding and unable to benefit from the Australia Council announcement, they said. Broader relief measures including a doubling of the Jobseeker benefit did not adequately address specific industry conditions.

Artists with disabilities, Australians stranded overseas, and those whose partner's or parents' income exceeded eligibility thresholds could not receive extra income support. Extra payments, in any event, are not available until late April.

The statement calls for targeted stimulus amounting to two percent of the overall value of the $111.7 billion cultural and entertainment industry, comprising $1.5 billion in cash injection payments to affected businesses so they can retain staff, adapt programs and redevelop audiences. A further $180 million was required for the Australia Council, as well as rent relief and security for arts groups.

Noting that "tragedies had already occurred", the group also called for a $40 million investment in Support Act and the Artists' Benevolent Fund to urgently redress the sector's mental health crisis.