Viewers were left in tears after a woman carrying triplets showed signs of a rare blood condition that could cause a miscarriage and was faced with a difficult decision on Baby Surgeons: Delivering Miracles.

The fascinating Channel 4 documentary series focuses on the incredible work of the fetal medicine, neonatal and maternity units at St George’s Hospital.

And in last night’s episode, expectant mother Susie was informed how two of her triplets, which were identical and sharing the same placenta were suffering from twin-to-twin transfusion syndrome – where one baby was receiving too much blood and the other too little.

Susie, who had previously been diagnosed with severe poylcystic ovary syndrome and spent £100,000 in five years on IVF cycles to fall pregnant, had little choice but to undergo pioneering but potentially risky surgery for a successful birth.

While the operation was a success, those who tuned in were quick to take to social media to comment on how they’d been on a ‘rollercoaster’ of a ride with Susie throughout the programme.

‘Oh god, please no! Let Susie keep these babies,’ wrote one viewer, while a second penned: ‘I am dehydrated from crying.’ 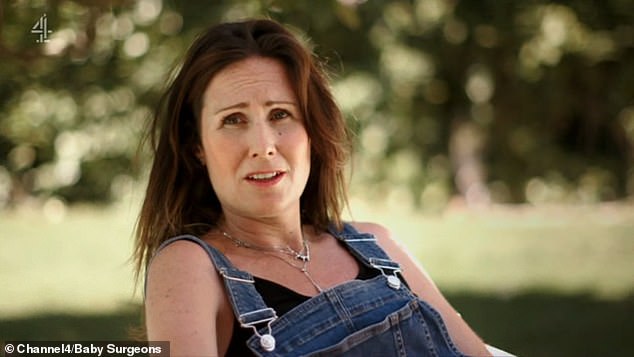 Expectant mother Susie (pictured), from the UK, was informed how two of her triplets, which were identical and sharing the same placenta. were suffering from a condition known as twin-to-twin transfusion syndrome, or TTTS – meaning one baby was receiving too much blood and the other too little. 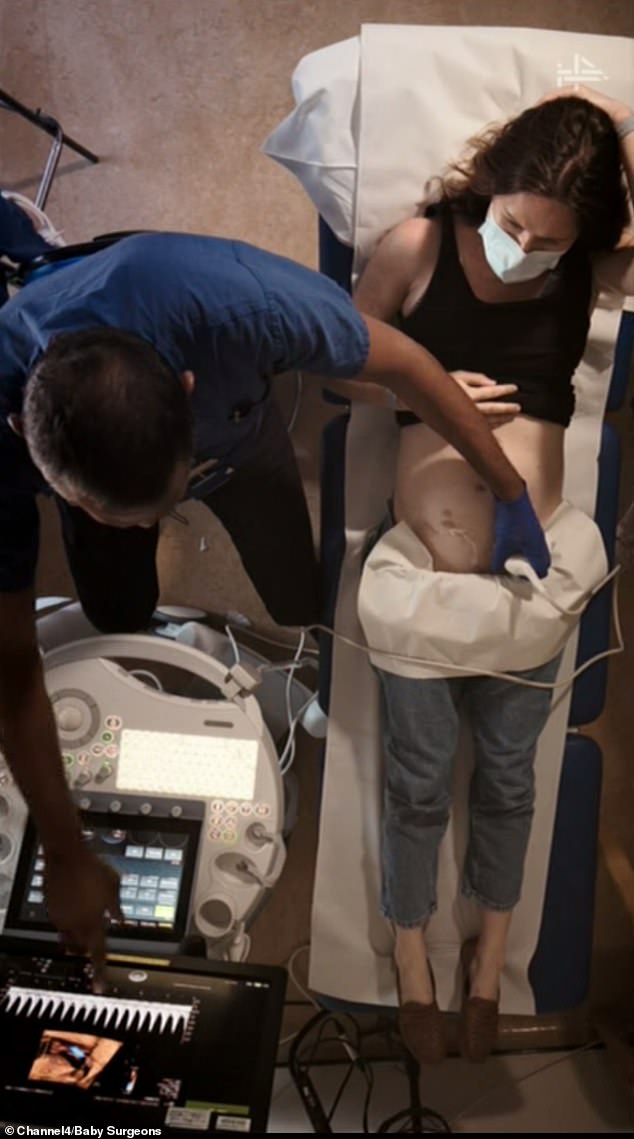 During the episode, professor Basky Thilaganathan warned if nothing was done, there’d be a 90% chance Susie would miscarry before 24 weeks (pictured, together)

Taking to social media, one emotional viewer penned: ‘I am dehydrated from crying’ (pictured)

In one emotional scene, Susie explained how her and partner Andy had been on a long journey to become pregnant for a second time.

‘When Henry was about two, we were that couple who thought, “we’ll just get pregnant spontaneously now.” But I was diagnosed with severe polycystic ovaries. We’ve gone through back to back IVF cycles. It’s very difficult for them to access a good egg – a bit like a needle in a haystack.

‘We’ve spent £100,000 over the five years. You see women that are pregnant all of a sudden. You can’t help but give in to that feeling, can’t this just be straight forward.

I can remember conversations we’d have where I’d get so fixated on having another child it was like Andy didn’t matter.’ 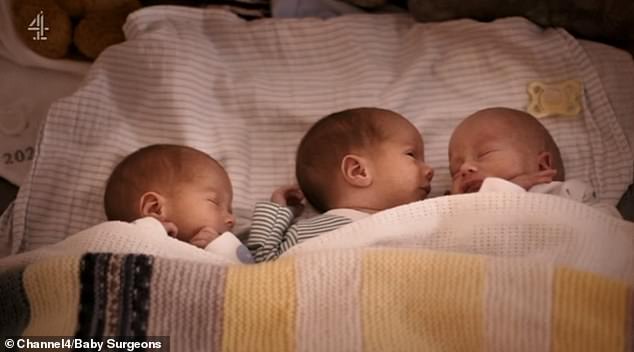 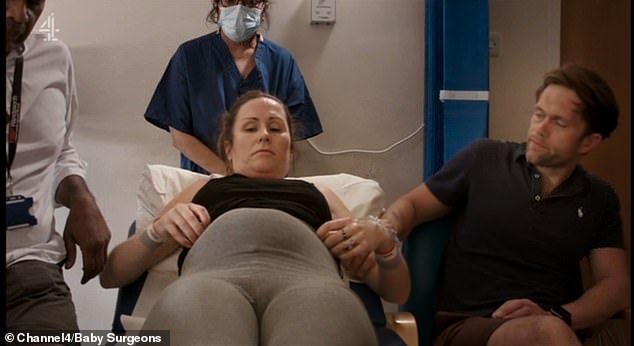 Following the surgery, an ultrasound revealed the baby’s heartbeats were strong and healthy and that the surgery had been a success. Pictured, Susie and partner, Andy

WHAT IS LASER SURGERY FOR TWIN-TO-TWIN TRANSFUSION SYNDROME?

In complicated cases of twin-to-twin transfusion syndrome (TTTS), surgery can offer the best chance of having two healthy babies.

Laser ablation surgery delivers laser energy that seals off the blood vessels on the surface of the shared placenta that is allowing for blood flow to be shared.

Because the vascular connections between the two fetuses are sealed, no further blood exchange between the foetuses takes place.

Most surgeries are performed under local anesthesia. A small incision (3mm) will be made and a trocar (small metal tube) will be inserted into the amniotic sac of the recipient twin.

An endoscope (medical telescope) will be passed into the uterus. The blood vessels, which are visible on the surface of the placenta, will be analysed, and all communicating vessels will be sealed off with laser energy.

The excess amniotic fluid may be drained from the sac of the recipient twin.

Pregnancy outcomes after laser therapy for TTTS is as follows: approximately 85 per cent of patients will have at least one foetus survive, 50 per cent will have both survive, with a five per cent risk of a disorder of the nervous system such as cerebral palsy.

NICE has said that this procedure is safe enough and works well enough for use in the NHS.

During the episode, professor Basky Thilaganathan warned if nothing was done, there’d be a 90% chance Susie would miscarry before 24 weeks.

‘The way we treat it is to put a small telescope in,’ he explained. ‘Using a laser, we block two or three blood vessels that connect the two circulations.

‘My concern is there’s a 10% chance that when we block the vessels, one of the heart beats doesn’t survive – that’s the risk.

An emotional Susie told the camera: ‘It’s taken us so much IVF to get here, then we’re randomly blessed with three and now this is happening – it’s like some cruel game.’

Agreeing to go ahead, professor Thilaganathan explained how he was blocking anything that crossed the placenta.

‘We shine the light which tells us where the laser is aimed and the blood inside the vessel clots immediately,’ he said.

Four hours later, an ultrasound revealed the baby’s heartbeats were strong and healthy and that the surgery had been a success.

And those who tuned in exhaled a sigh of relief along with Susie, Andy and professor Thilaganathan.

‘Oh my holy moly. How do these people do this job!? I’m crying my flipping eyes out here,’ wrote one, while a second commented: ‘Genuinely think I held my breath throughout that surgery, heart in mouth!’

A third added: ‘Just casually crying every three minutes at,’ while another emotional viewer wrote:

‘Made the mistake of watching #BabySurgeons I am a crying mess.’

Elsewhere, others took the opportunity to praise the incredible work of the doctors and medical teams at the hospital.

‘These doctors are amazing human beings,’ praised one, while a second enthused:

‘Wow, #BabySurgeons made me cry again! The doctors at @StGeorgesTrust are amazing! Good luck to all families involved in this brilliant documentary.’

A third added: ‘Another brilliant episode tonight. In total awe of the medical team and the brave families. Its truly amazing what can now be done.’ 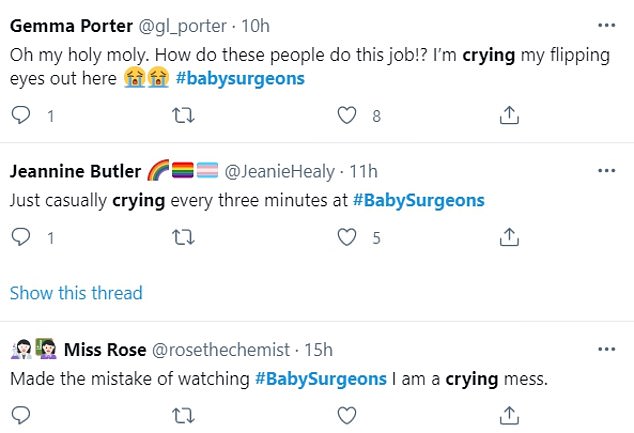 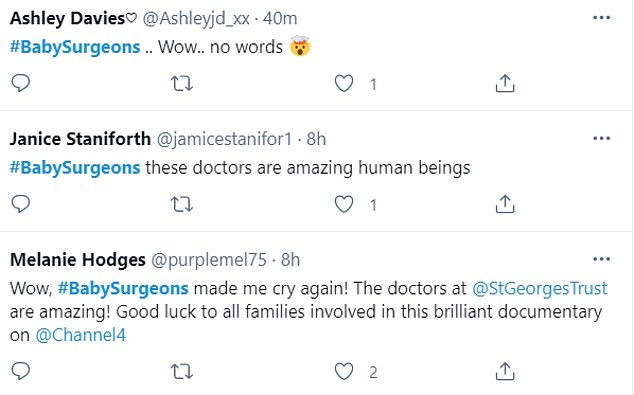 Taking to the  comments section, one person enthused: ‘Another brilliant episode tonight. In total awe of the medical team and the brave families. Its truly amazing what can now be done’ (pictured)