As I sit down with Michael Robotham, I mention I’ve just been reading about Natasha Darcy, the so-called “Widow of Walcha” who was this month found guilty of sedating her lover in 2017 and then killing him by asphyxiation with helium. Her conviction had triggered the publication of a torrent of background detail about the case.

Robotham had missed the reports, but his interest was piqued. 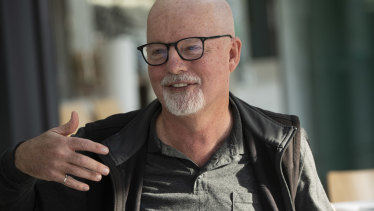 Michael Robotham is fascinated by the dark forces that make humans do terrible things.Credit:Wolter Peeters

“I’ll look at that,” he says. “Stories like that fascinate.”

It’s the sort of tragic case that could well prove fertile ground for the Sydney crime writer who has sold more than 6 million books worldwide, won two prestigious Gold Dagger awards and often uses real-life events as a jumping-off point.

But as a former journalist, he knows too well that most outbursts of violence are depressingly predictable. Only the most egregious cases – the outliers – can hold an audience.

Over 20 years, Robotham has plotted innumerable killings in his pages – some of them very grisly. None of them banal.

He did much of his growing up in Gundagai in the mid 1960s. He recalls an early, charmingly modest flirtation with a life of crime.

But while a career as a master criminal was obviously not knocking, he did know from an early age that he wanted to be a writer. 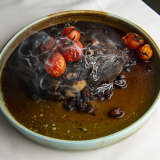 The lamb arrived with a sprig of burning rosemary.Credit:Wolter Peeters

It was celebrated US author Ray Bradbury who sealed the deal. By 12, Robotham had devoured all of Bradbury’s books apart from three that were unavailable in Australia. He wrote to the American master, asking how he could get hold of them.

“I came home from school about three months later and there was a package waiting, and inside were three Bradbury titles and a letter from Bradbury himself, saying how thrilled he was to have a fan on the other side of the world.”

It was a powerful and inspirational experience that helped to set Robotham on a path to the top of bestseller lists worldwide.

In person, Robotham is modest and engaging. He has a store of anecdotes from his long career but also a disarming habit of asking his own questions, a hangover perhaps from his days as a journalist.

For lunch he has chosen Jounieh, a bright and relaxed spot that specialises in Lebanese cuisine and makes the most of its indoor/outdoor space, overlooking the water at Walsh Bay. It’s a particular favourite of the pre-theatre crowd who are going to the Sydney Theatre Company across the road – a crowd that sometimes includes Robotham and his wife, Vivien. 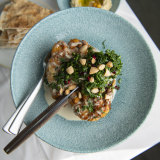 Over an entree of hummus and pita bread, Robotham tells me that he was all set to take a place studying law at Sydney when he left school just because that was what was expected of bright kids. Tight finances meant he would first have to work for a couple of years, though. Along with more than 10,000 other hopefuls, he applied for one of 16 cadetships at Fairfax Newspapers, former publishers of The Sydney Morning Herald. 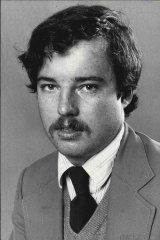 Michael Robotham as a young journalist in 1982: “I was such a hayseed!”Credit:Fairfax Media

He recalls travelling to Sydney for his first interview.

“I was 17 years old, about to sit the HSC, and I realised I had never been in a lift before by myself so I didn’t know how to work it.

“I stood outside, waiting for someone else to get in. And I saw the security guards watching me and thinking, ‘Who is this guy and why isn’t he getting in the lift?’ I didn’t even know whether I had to press a button to close the doors once I was in.”

Despite – or because of – that lack of life experience, he was taken on by Fairfax’s afternoon newspaper, The Sun. “I was such a hayseed! I think I learnt more in my first year at Fairfax than I learnt in the rest of my life.”

It became a game among the other journalists to see how much they could shock the wide-eyed boy from the Bush. “One time, my driver and photographer took me to a strip joint, and to this day it was the most eye-opening thing I have ever seen.”

After rising through the ranks in Sydney, Robotham had a hankering to try the big leagues. He headed to Fleet Street in the mid ’80s and a job as a feature writer at the Mail on Sunday, only leaving eight years later when he was offered an initial contract as a ghostwriter. 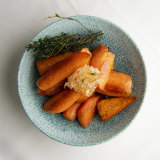 Learning to write in someone else’s voice would prove invaluable.

“You do hour after hour of interviews and then you transcribe them and then there comes a time where you write a paragraph and you think – that’s their voice,” he says. “You can’t put your politics or your sense of humour in. You have to try to mirror theirs, and if you do it well, someone who has known them their entire lives won’t recognise your fingerprints on the text. It will look and sound and feel just like them.”

Many of his subjects were hearty in their praise for the uncredited writer who had captured their tone so perfectly (Geri Halliwell dedicated her book to him). But not all.

“Some people I wrote for convinced themselves within a fortnight that they had had no help!” he says.

And that Rolf Harris job? Robotham had no inkling about the depths of Harris’ depravity, but at the same time he felt something wasn’t quite right.

“He would tell me stories that he thought made him out to be a bit of a Jack-the-Lad but didn’t realise he just sounded like a dirty old man. He thought he was a charming old rogue.” (The singer was jailed in Britain in 2014 for historical sexual assaults involving four underage girls.)

In 2001, during a few months in the middle of ghosting jobs (“I was between Rolf and Lulu”), Robotham wrote 117 pages of an as-yet-unnamed novel. What unfolded reads like every first-time fiction writer’s fantasy.

“The phone was ringing at 3am and my agent said there were five American publishers bidding, four German publishers bidding and the Danes have offered this and the Dutch have offered that,” he says. “I had dreamt of being a writer since I wrote to Ray Bradbury and here I am in my early 40s and every dream I ever had came true over those three hours.

‘By 7.30 we had cast the Hollywood film and by 8am the terror began to set in: Oh my God, these people think I can write a novel!’

“At 7am my wife and I are still awake, by which time we had spent the money. By 7.30 we had cast the Hollywood film and by 8am the terror began to set in: ‘Oh my God, these people think I can write a novel. I’ve never written a novel!’”

He pulled it off. And then some. His debut novel, The Suspect, sold more than a million copies worldwide. It was to be the first of a series of nine books featuring psychologist Joe O’Loughlin, a character inspired by Paul Britton, the high-profile British psychologist and profiler with whom Robotham had ghosted two books.

“He has the most brilliant mind – the way he looks at the world,” Robotham says. “You’d ask him a question and he’d look at you with his piercing eyes and say, ‘Why do you ask that?’ I’ve never been interested in the forensics of how many times someone has been stabbed – I want to know what is going through their mind.” 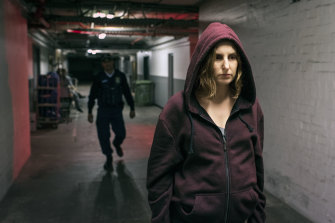 Downton Abbey star Laura Carmichael in The Secrets She Keeps, which is based on the author’s standalone novel.Credit:Network Ten

Another book, The Secrets She Keeps, has been adapted into a six-part television series, with a second in preparation. A Joe O’Loughlin series will begin shooting in September.

Robotham’s latest book is a standalone novel, When You Are Mine, a compelling, twisting thriller that explores the horror of domestic violence and the dark forces that lead one human to fixate on another.

Like his other books, he allowed this one to grow organically, without methodically plotting out the action.

“I get so excited about what I’m doing I just want to get into it. I’d be a terrible criminal because I think I’d be really good at planning the crime but I’d be so excited about how clever I was, I wouldn’t think: ‘What happens afterwards? How do I stop being caught?’”

This approach sometimes comes at a high cost. At times he has plotted himself into a corner and had to backtrack. On one occasion he hit “delete” on 40,000 words.

“It’s like being a high-wire trapeze artist. I’m fine at letting go and tumbling through the air. If I’ve got five or six things swinging towards me to grab hold of, I’ll get one of them. But when there’s only one and I miss, it hurts when I fall.”

Robotham’s children have jokingly dubbed the writing room in his Northern Beaches home the “cabana of cruelty”. However, he insists that what he conjures up in his books doesn’t colour his view of humanity.

“I’m not a bleak person,” he says. “People imagine I see the world as a really dangerous place because of what I write, but I know full well there are more serial killers on the shelves of any bookshop than there have been in real life in human history. I don’t regard the world as a scary place.”

When You Are Mine is published by Hachette. Lunch was at Jounieh, Promenade Foreshore, Walsh Bay.

The Booklist is a weekly newsletter for book lovers from books editor Jason Steger. Get it delivered every Friday.