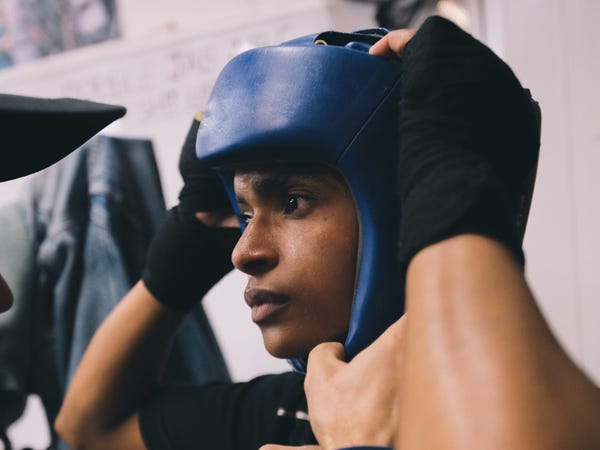 Ali doesn't have a birth certificate, has a best guess for when her birthday actually is, and is believed to be 26 years old.

She was born in Somalia during the civil war "when not much attention was given to birth, death, or marriage certificates," Ali said during an exclusive media conference Insider attended last month.

"So upon fleeing the country and coming to the UK, you've got to declare something, and it was a date that was chosen for me for my sister. 'You look like a Virgo.' So I'm a Virgo."

Ali grew up in Britain and has never returned to Somalia for fear of being a target. Her brother was killed before her family left the country. She keeps the names of her parents and relatives secret, in case people they know are held for ransom.

"It's too dangerous [to go back to Somalia]. I feel like now that I have a bit of a profile … I'd be a target."

She told Insider: "I don't have many memories of Somalia because I left so young. I believe I was still breast-feeding. A lot of memories I do have, are the memories or stories that my mom would tell us.

"The first memory of coming to the UK, we came around November time and it was freezing. I didn't even know what cold or a coat was until I came to the UK."

Ramla Ali is one of Anthony Joshua's proteges

Many of the most powerful people in British boxing are guiding Ali's career, such as the brains at 258 MGT — a management company led by Freddie Cunningham — one of Cunningham's top clients Anthony Joshua, and Eddie Hearn, who wields significant influence in global sport.

Cunningham will be trying to do for Ali what he has done for Joshua, who is a three-belt heavyweight boxing champion sponsored by numerous blue-chip brands like Under Armour, Jaguar Land Rover, and Beats. He even features in popular video games like FIFA and UFC.

That link with Joshua is excellent for Ali. He gave her his private number and is available any time of the day — to chat about things inside or outside the ring.

"I have a day-to-day contact with Anthony Joshua on WhatsApp," Ali said.

"He was probably scared to give it to me in case I over-used it. But any time I need him he's only a phone call away, and there's been times that I've been down and messaged him and he's always got really positive things to say, which is really nice."

When Matchroom announced it had signed Ali to a promotional deal in September and would make her debut this month, Joshua said: "Long may she reign."

Ahead of her October 31 debut, it is words that have stuck.

"He's always got your back if you need it. Everyone at 258 I feel like they're brothers. Josh [Anthony Joshua] would message me in the amateurs after a loss saying, 'Chin up.' It always felt like family."

The Duchess of Sussex thinks highly of Ali

Meghan Markle was the guest editor for a 2019 issue of Vogue magazine called "Forces for Change." The Duchess of Sussex wanted Ali on the front cover, to be one of her forces for change.

Ali, who had to box behind her family's back when growing up because they disapproved of the sport, became the first Muslim woman to win an English amateur boxing championship. Now, her family is Team Ali, she said.

"She did call me to thank me for being on the cover — as if I would ever say no," Ali recalled speaking to Markle for the first time.

"It was quite weird as it was on a private number and I didn't pick up. It went once, twice, and by the third time I had to pick it up, as it might be my mom in need.

"We had a really nice conversation. She's such a lovely person, so sweet, so lovely. The fact she introduced herself as Meghan and not the Duchess shows her character."

"It's a shame that crowds are not allowed to come and watch because I would have 100% invited her to my debut.

"I mean, I don't know how I would have gotten hold of her … probably send some tweet and hope she sees it, but it would have been cool, for sure."

Ali was a late addition to the event having only received a call earlier this week.

"I think it was like Monday night and I thought I wasn't going to compete. I was 'this' close to saying, 'Screw it, I'm going to order a pizza.'

"It's so amazing to have at least one female bout on every undercard. On Saturday there's three! It's not a novelty, women's boxing is serious!

"Women's boxing is booming and I'm just blessed to be a part of it and fighting on Saturday.

"My story got me through the door. People say, 'Does she deserve it?' The next step is for me to prove that I'm more than just a story. I plan on doing so with a nice win on Saturday."