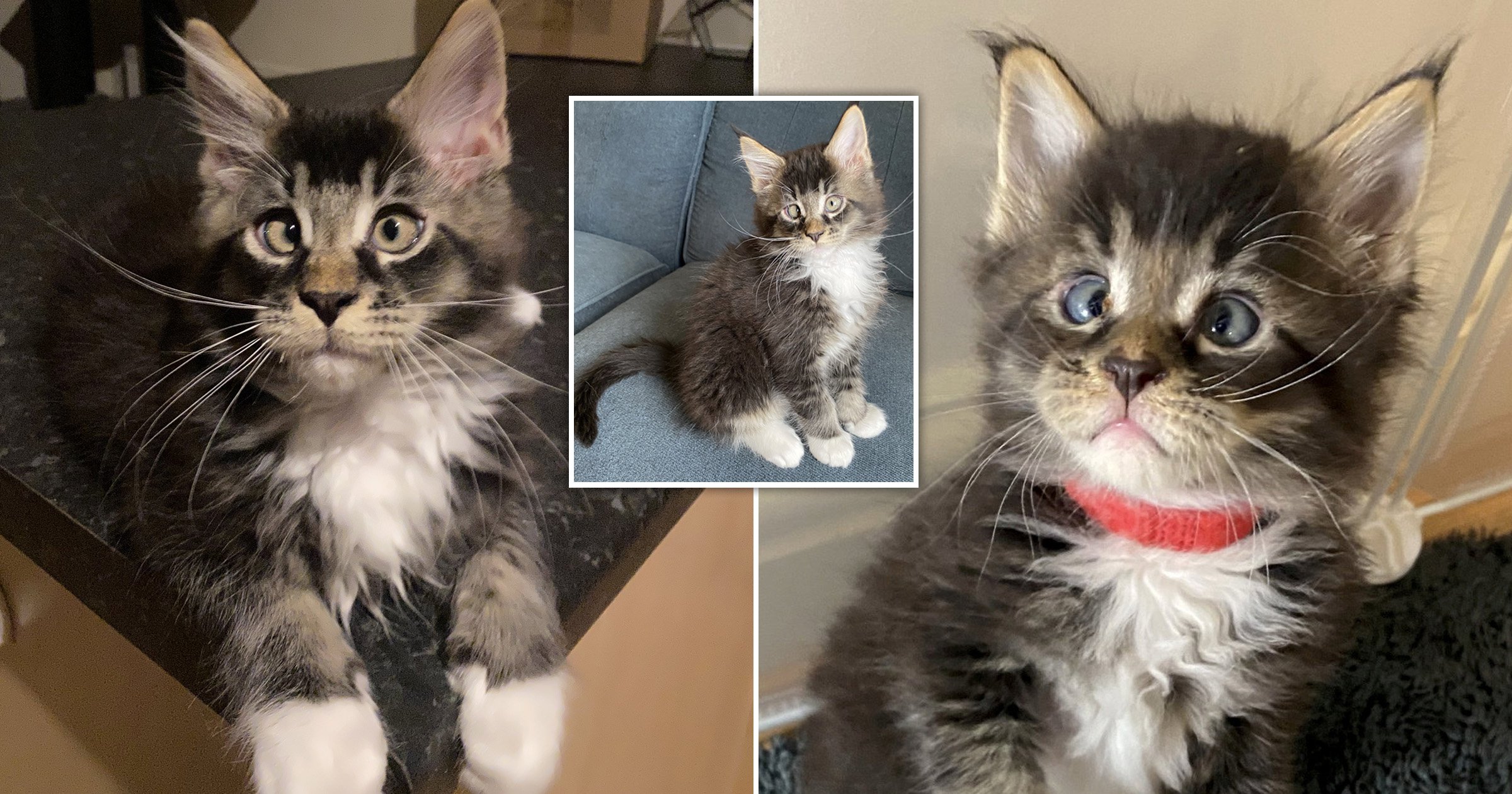 Breeder Rebecca Hardy was thrilled when Mahri, her two-year-old Maine Coon cat, gave birth to a litter of seven in December.

As the kittens slowly started opening their eyes, the 27-year-old noticed they all had a condition known as convergent strabismus – where their pupils are turned inwards, towards the nose.

But as time went on, and their extraocular muscles strengthened, six of the kittens adjusted their eyes to the middle – but the seventh didn’t.

The standout kitty now goes by the name of Red – but Rebecca says his condition doesn’t seem to affect him very much.

The breeder, from Hillsborough, explains: ‘He’s a little bit more delayed when playing with the chaser toy, but he doesn’t know any different.

‘He’s got a ridiculous amount of confidence for a cat that’s cross-eyed.’

Rebecca has been breeding Main Coon cats with Mahri for just over a year and Red was in her second litter.

Rebecca and her four-year-old son Eli spent hours delivering the kittens on December 18.

But it wasn’t until a few weeks later that the mum-of-one noticed their eye issues.

She adds: ‘They opened their eyes at about a week-and-a-half old and all the kittens were cross-eyed as the muscles have not strengthened enough.

‘It’s not very common but it’s not dangerous, it’s very cute and we’d seen it in our other litter as well.

‘It was only around week six or seven that we realised this little boy’s eyes weren’t going to straighten out, everyone else’s had about the fourth week.’

It’s likely Red will be cross-eyed for the rest of his life – and despite being the anomaly, Rebecca stresses he has such an amazing personality.

He also grew to the biggest in the litter, weighing 2.2kg at just 12 weeks old.

‘If I walked in the room and touched another kitten he’d be shouting at me,’ Rebecca adds.

‘If I bent down in front of him he’d jump on to my back and be on my shoulder when walking about like a little parrot.’

Red was even the first of his litter to be picked for his forever home.

‘As much as they’re all perfect in our eyes, if you’d seen him amongst his littermates he was the funniest one,’ Rebecca continues.

‘People want a perfect kitten don’t they, but I don’t think perfect is always the best.’