Mars will be easily visible from Earth as our homeworld will be passing directly between the Red Planet and the Sun. Mars opposition 2020 will mark the closest the major planet will come to Earth until 2036. According to Dr Elizabeth Pearson, the gloomy forecast for the rest of the week should cause no obstacle for stargazers planning an outing to bask in the sight of the Red Planet.

Speaking to BBC Today, Dr Pearson said: “That’s actually ok, the fact that the weather doesn’t look terribly great for today, tomorrow or even the rest of the week.

“Until mid-November, you should, as long as there is a clear night, you should get the chance to see it.”

She continued: “If you look towards the east, Mars rises in the early evening, around sunset.

READ MORE: Mars opposition 2020: How to see Mars in opposition to Earth next week? 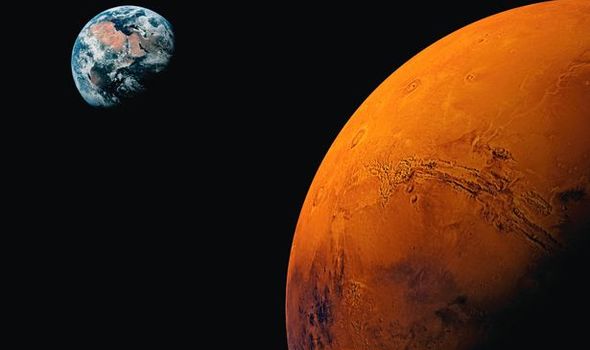 “If you don’t have a clear view, you’re probably going to want to wait an hour or two for it to have actually risen up over the landscape a bit.

“And if you look towards the east in the early evening, what you should see is a bright point of light. You can usually tell that it’s Mars because it does actually have a rather red colour…that’s why we call it the Red Planet.”

Dr Pearson added: “Also, if you look around that area, if you do manage to pinpoint Mars, you may even manage to pinpoint one or two other bright spots that are brighter than the stars surrounding it and those are actually Jupiter and Saturn.

“So if you look to the east in the early evening, you should actually be able to see a bunch of planets.”

Related posts:
World News:
This Day in History: Oct. 29
Live Updates: Hurricane Zeta battering Gulf Coast ; At least 1 dead
Tucker Carlson reveals documents implicating Joe Biden went MISSING
Up to 50,000 Brits have cancer that remains undiagnosed due to coronavirus disruption, charity warns
Recent News:
This website uses cookies to improve your user experience and to provide you with advertisements that are relevant to your interests. By continuing to browse the site you are agreeing to our use of cookies.Ok