The entire City Loop will be shut down for an undefined period in coming months to fix safety faults identified a decade ago at a cost that has blown out to hundreds of millions of dollars.

The impending shutdown will cause “significant disruption”, according to the Department of Transport. The fire and safety issues, revealed in an investigation by The Age in 2011, were supposed to be resolved with $43 million announced by the former Liberal Napthine government in 2014, but the upgrade remains unfinished and the cost of completing the entire project has jumped to eight times the original budget. 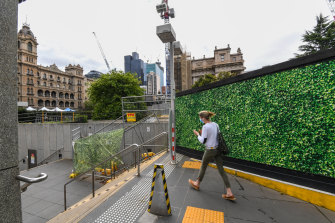 The collapse of a contractor hired to complete the repairs has stalled the work for the past three years, leaving scaffolding around parts of Parliament station and Flagstaff Gardens.

The Department of Transport, which is close to awarding a new contract to overhaul the smoke extraction and sprinkler systems, recently revealed the Loop shutdown was necessary to finish the upgrade of Parliament, Flagstaff and Melbourne Central stations.

“It is essentially a very major event and when we do that work we will have to close the [City Loop] for a period of time and that is a significant disruption, so we are just looking to find the right time,” Kevin Devlin, chief executive of the Level Crossing Removal Project, told the public accounts and estimates committee last month in previously unreported comments.

He did not specify how long the closure could be. A government spokeswoman said works would be scheduled to limit disruptions.

Opposition public transport spokesperson Steph Ryan said the works could not be “shoved off indefinitely” and the COVID-19 lockdowns were a missed opportunity to fix the stations while public transport patronage was low.

“I think it is appalling they didn’t do the work then,” she said. “Now the work still needs to be done, and it’s going to come at a time that jeopardises the recovery of the CBD. It is absolutely shocking that it has taken the government this long to do a critical safety upgrade.”

Department of Transport secretary Paul Younis said safety was essential and all systems were operating safely.

An average of 45,500 people enter the three railway stations each weekday, down from 105,000 before the pandemic.

The Napthine government, which only admitted that safety issues existed after a 2012 Ombudsman investigation harshly criticised the Department of Transport for failing to act, allocated $43 million towards the upgrade in 2014. 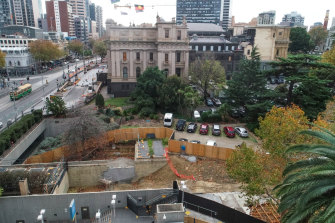 One of the City Loop safety upgrade sites, next to Parliament House, sits dormant in 2019.Credit:Jason South

But the Andrews government revealed in 2016 the budget had blown out to $134 million, three times the initial estimate, while the Victorian Auditor-General’s Office this year costed the entire works at $382 million. The collapse of the former contractor also brought flow-on commercial and legal costs.

Victorian budget papers released in May estimate the completion date to be the second quarter of 2023-24, but said the remaining and total cost were “to be confirmed,” with the business case yet to be finalised.

Stage one of the works — to upgrade fire detection systems, fire hydrants and CCTV, and to implement an intruder-detection system — have been completed. The next phase, expected to begin mid next year, will install a smoke-extraction system on the platforms and upgrade the sprinkler system.

“Hopefully we can piggyback on some other disruptions,” Mr Devlin said. “We would hope to have the works completed at this stage in 2023.”

A government spokeswoman said the large-scale works would ensure the continued safety of everyone who uses the City Loop as Melbourne’s population grows.

“This is a complex project that will be undertaken at the heart of our rail network and works will be scheduled to limit disruptions as much as possible.”